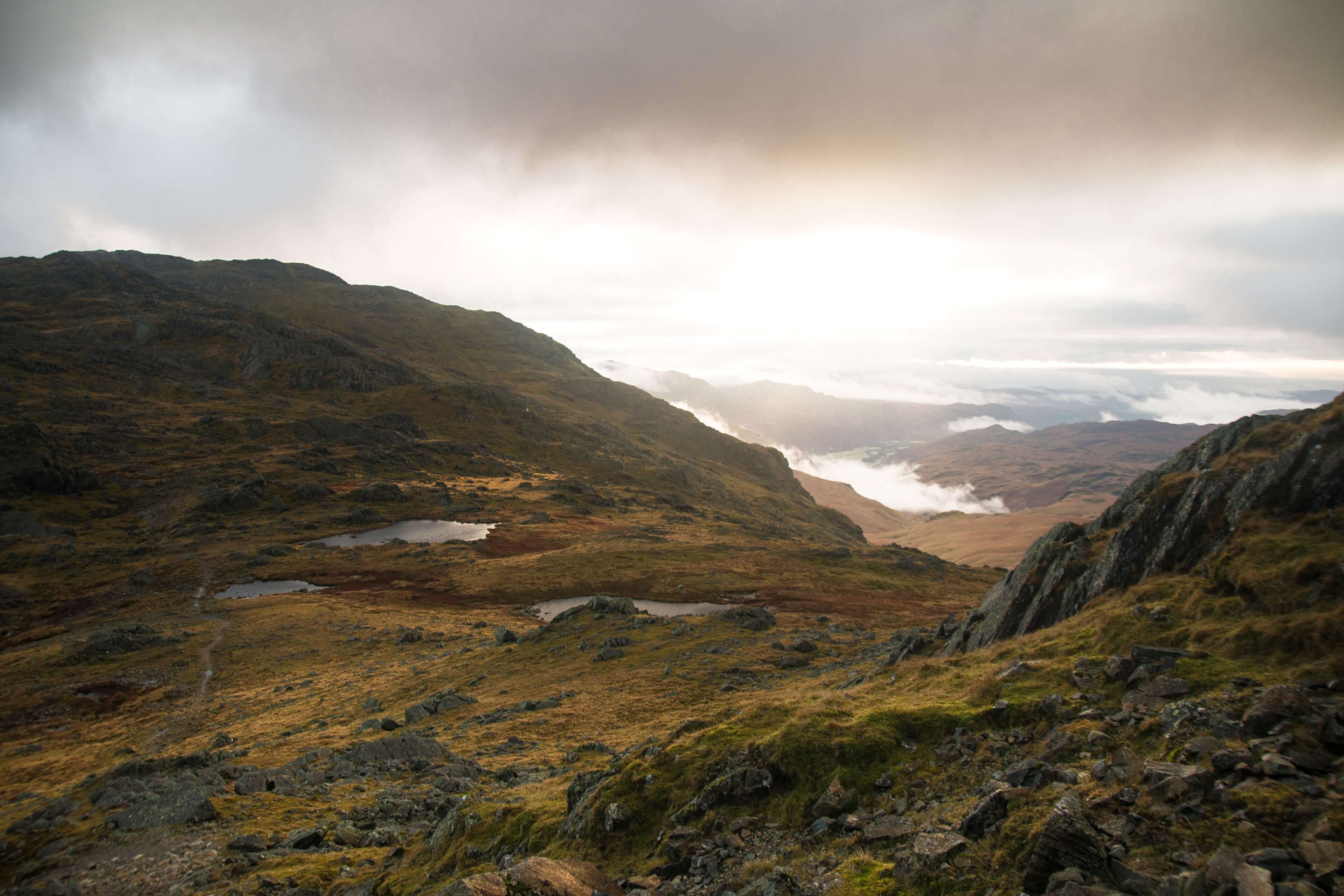 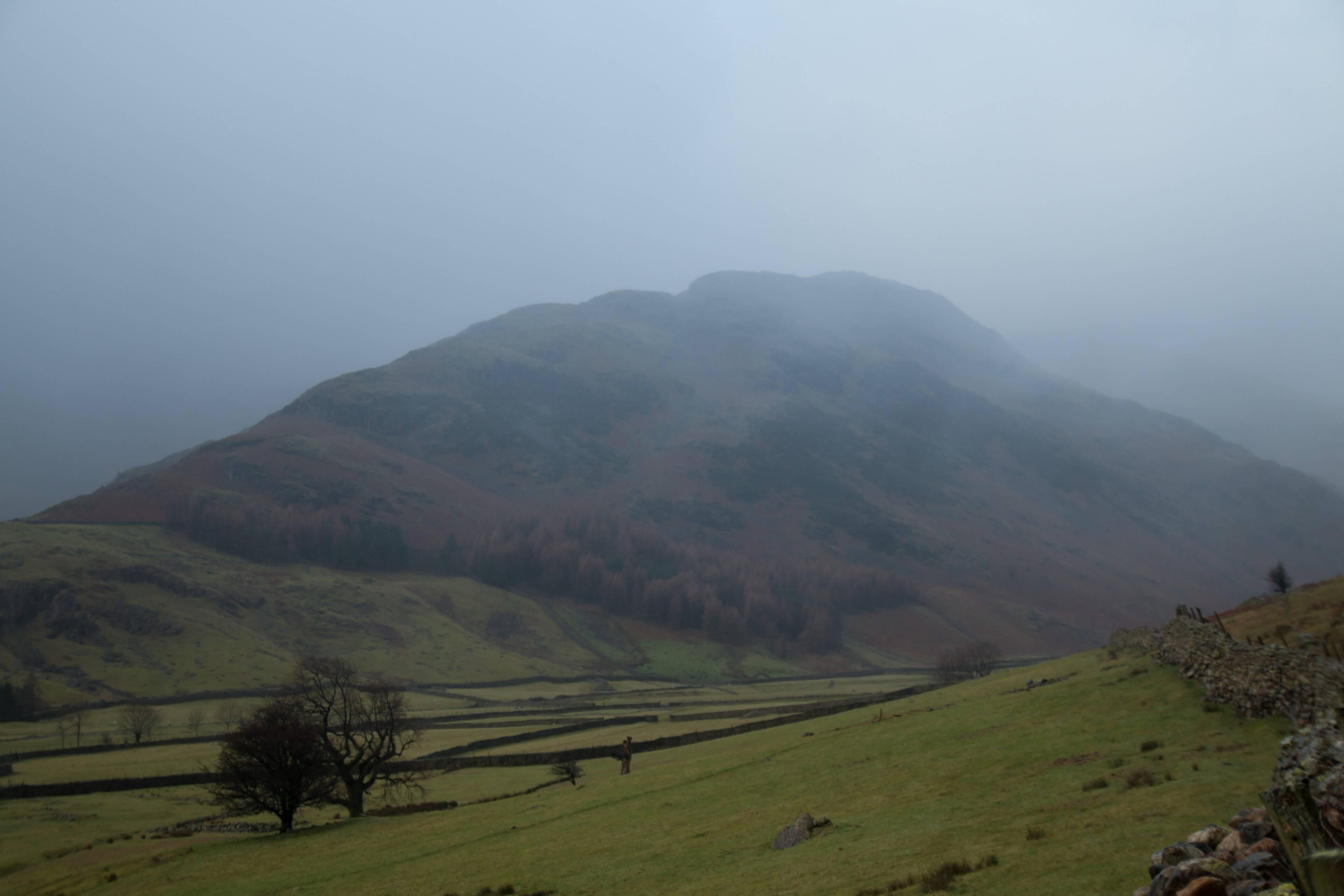 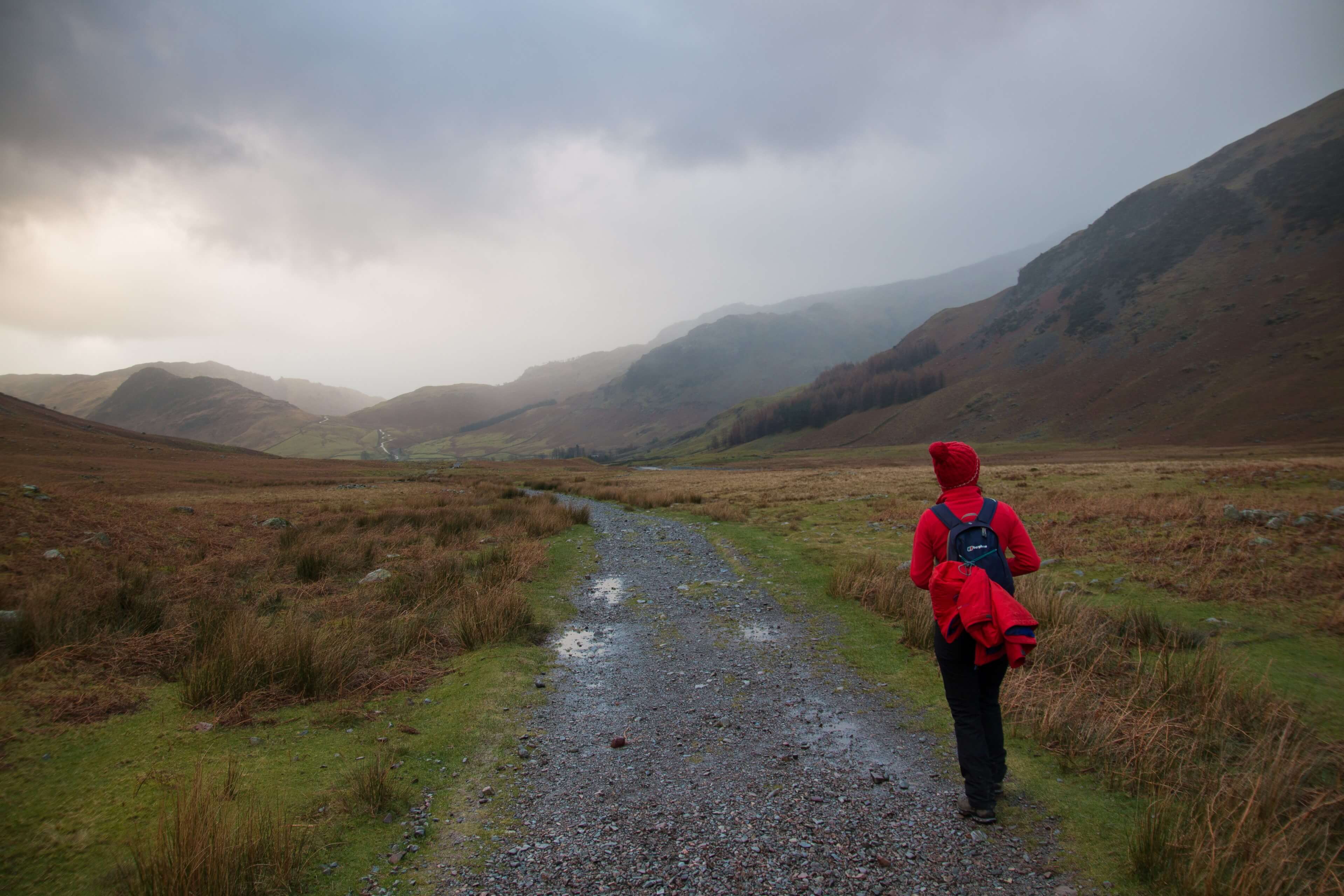 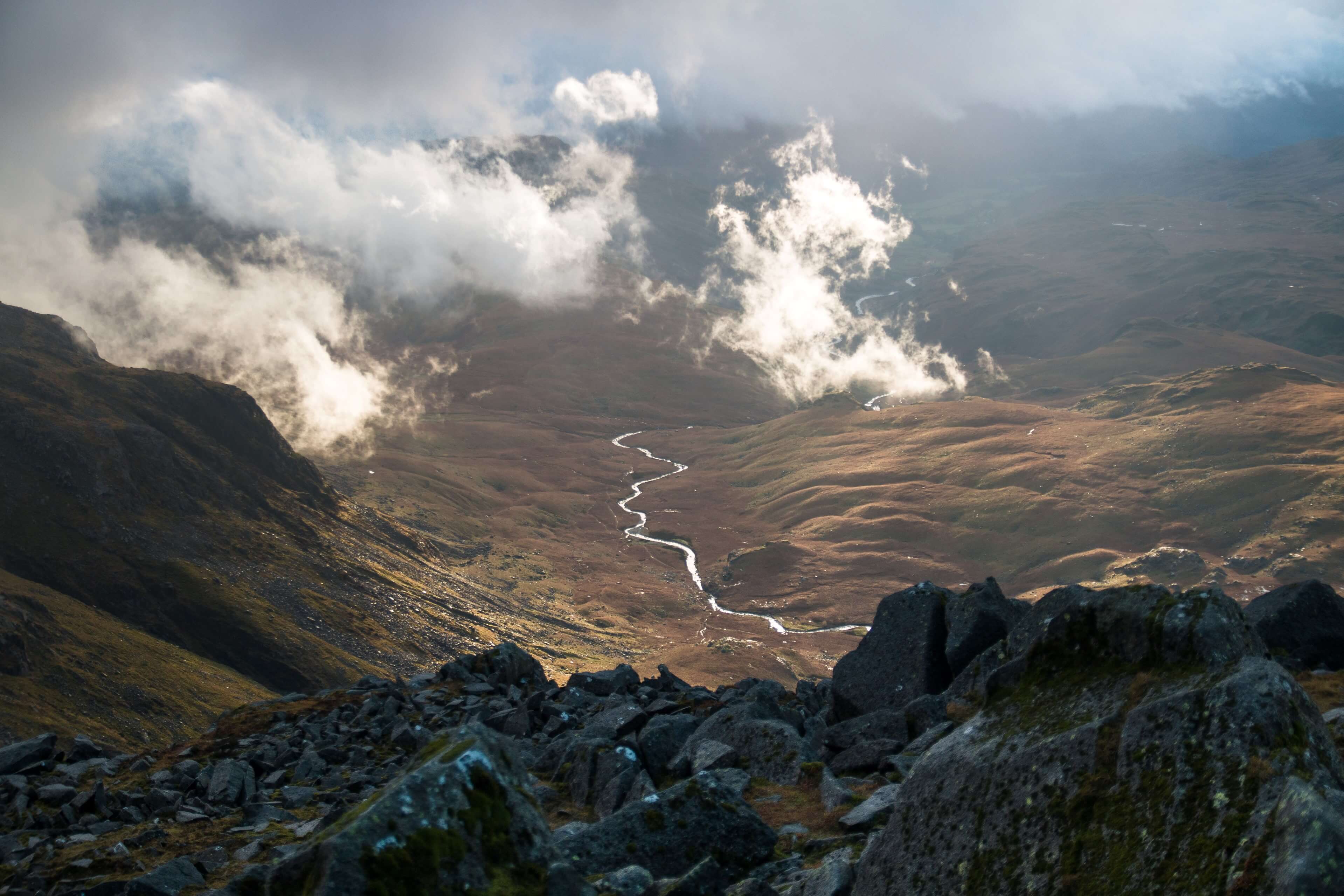 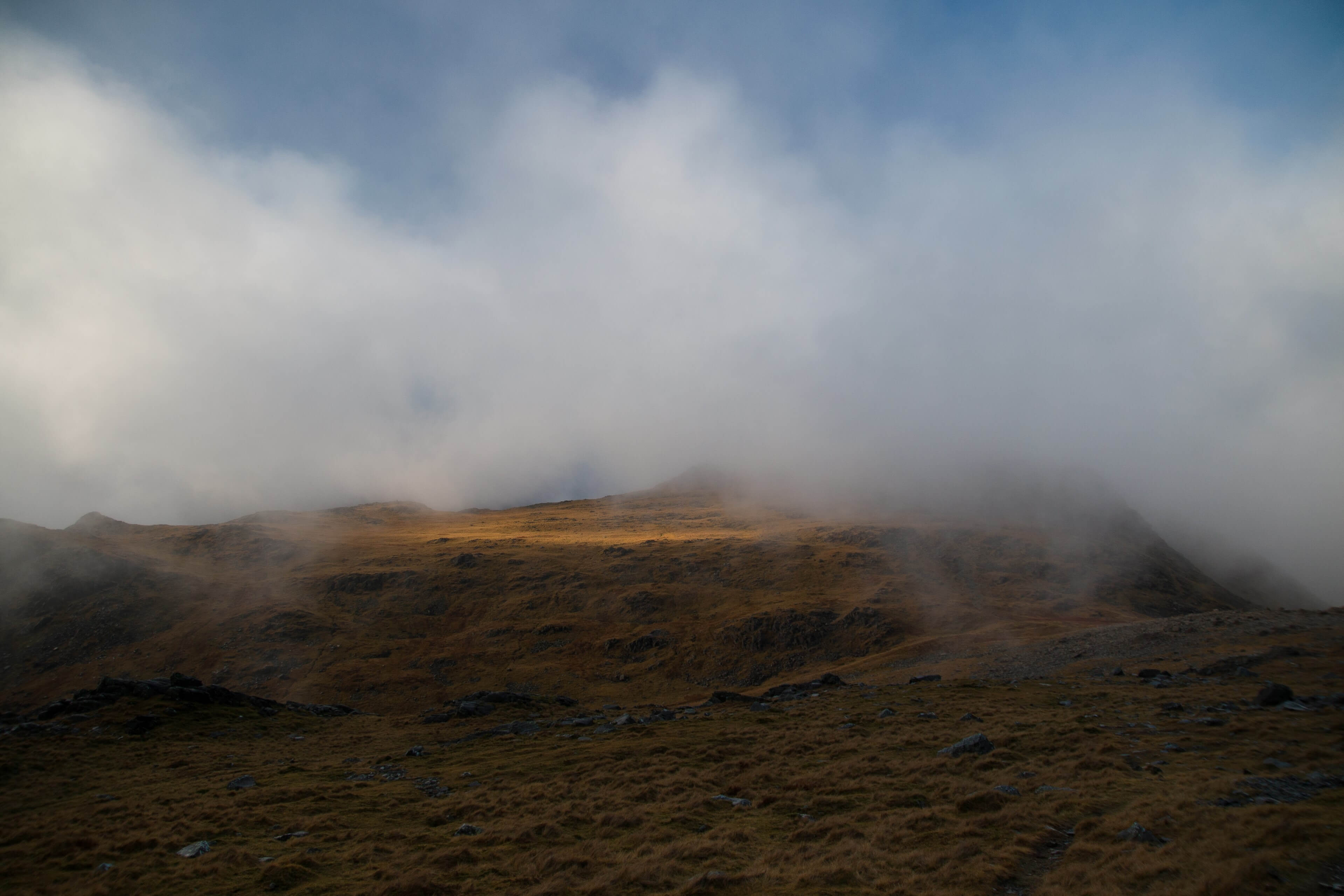 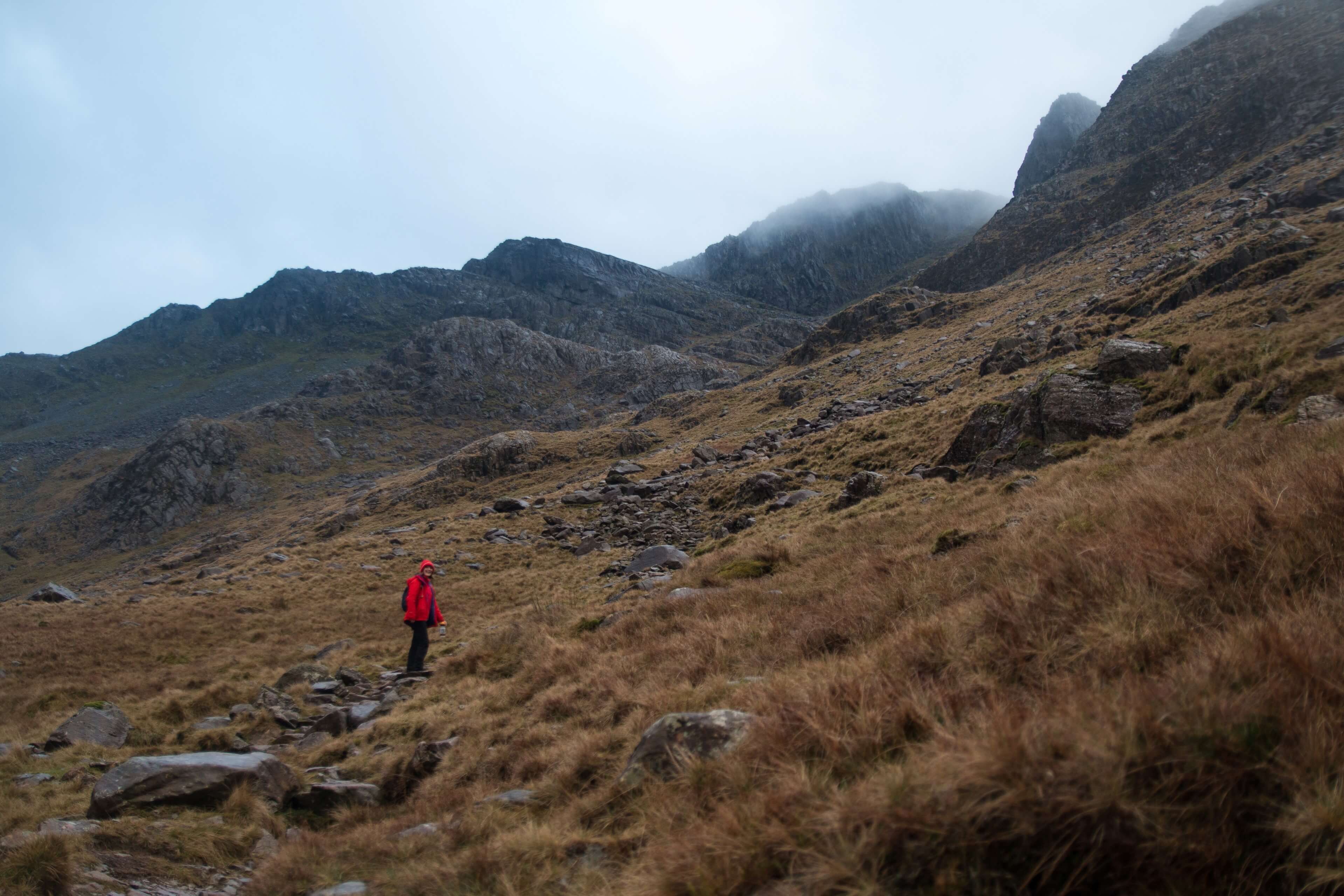 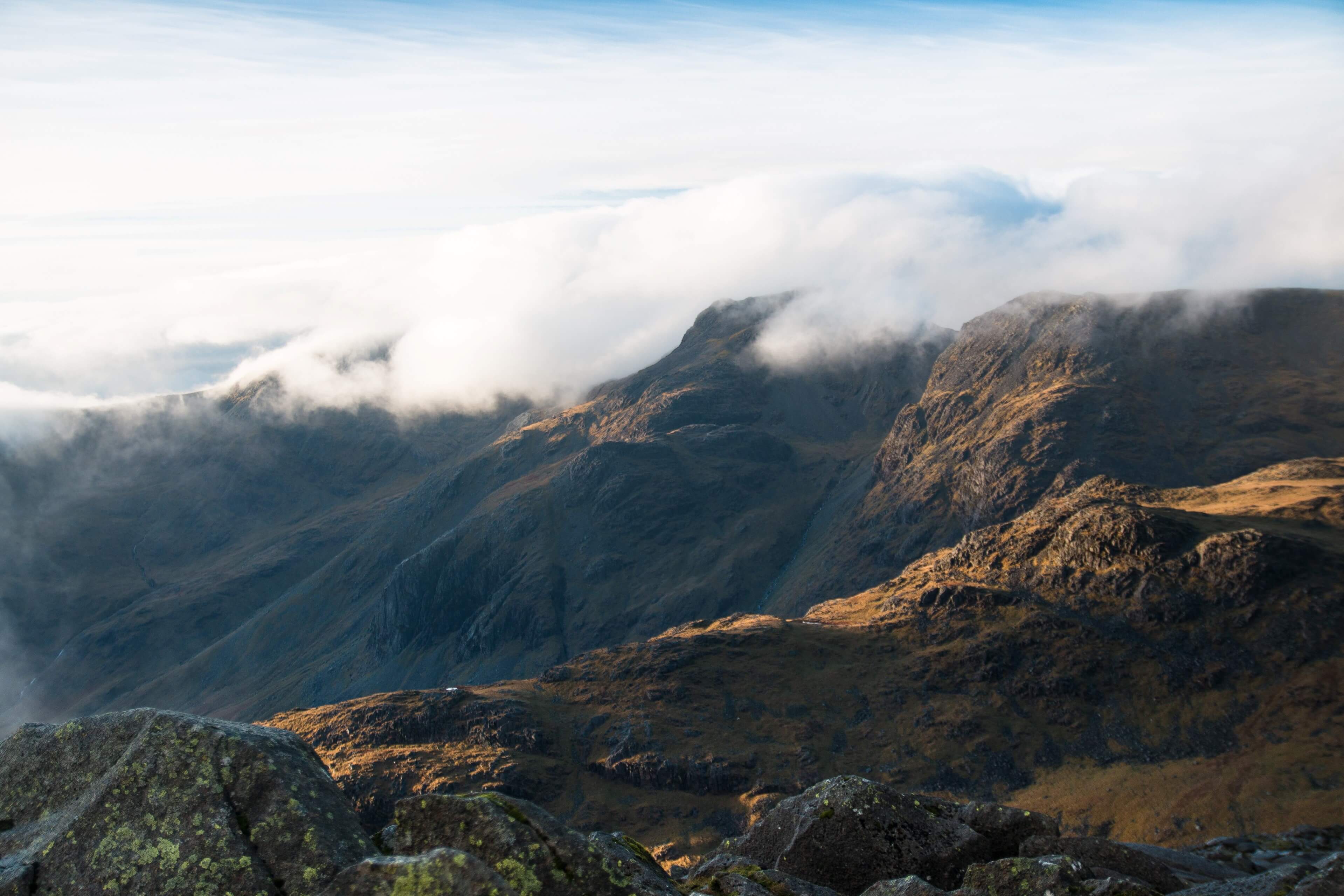 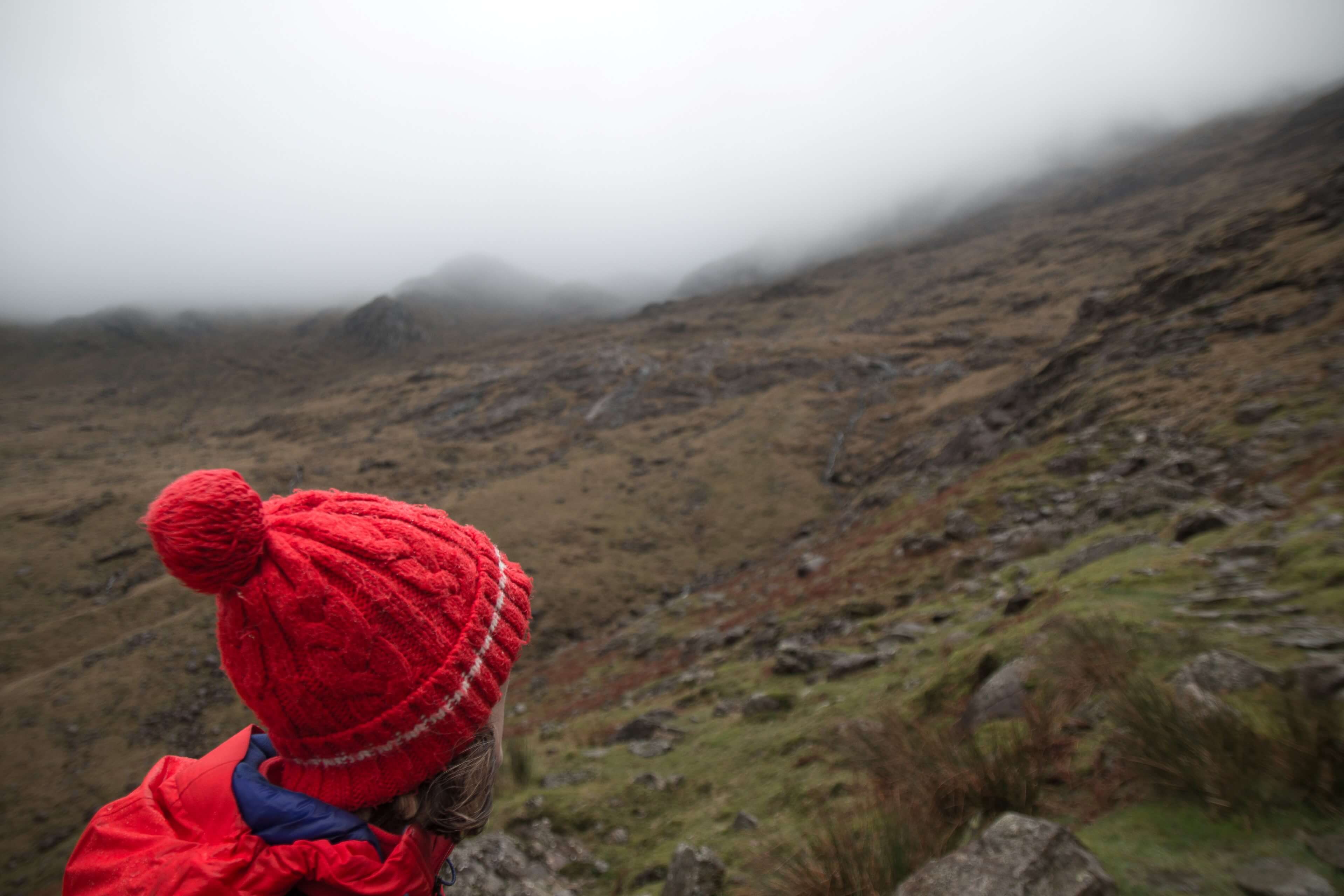 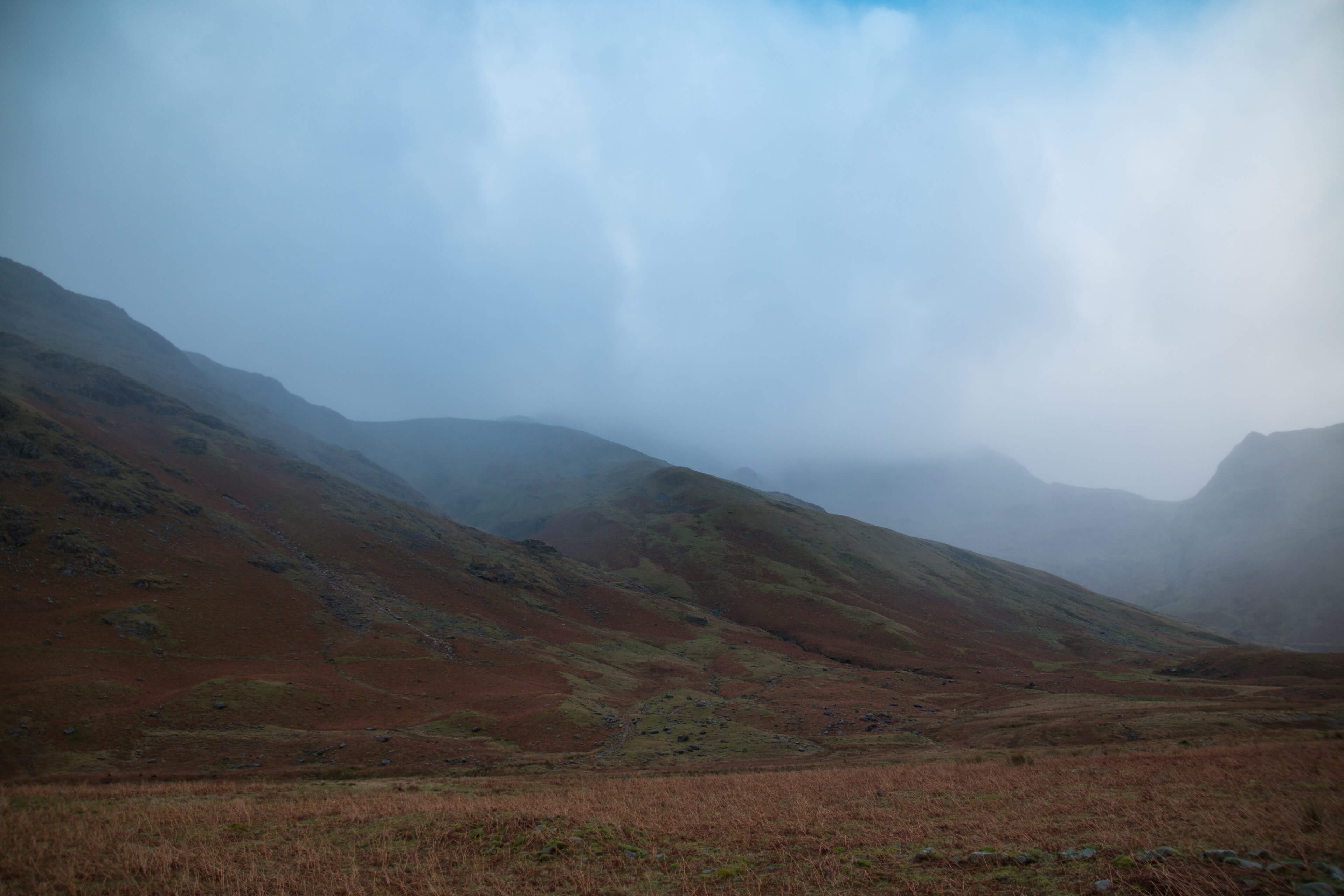 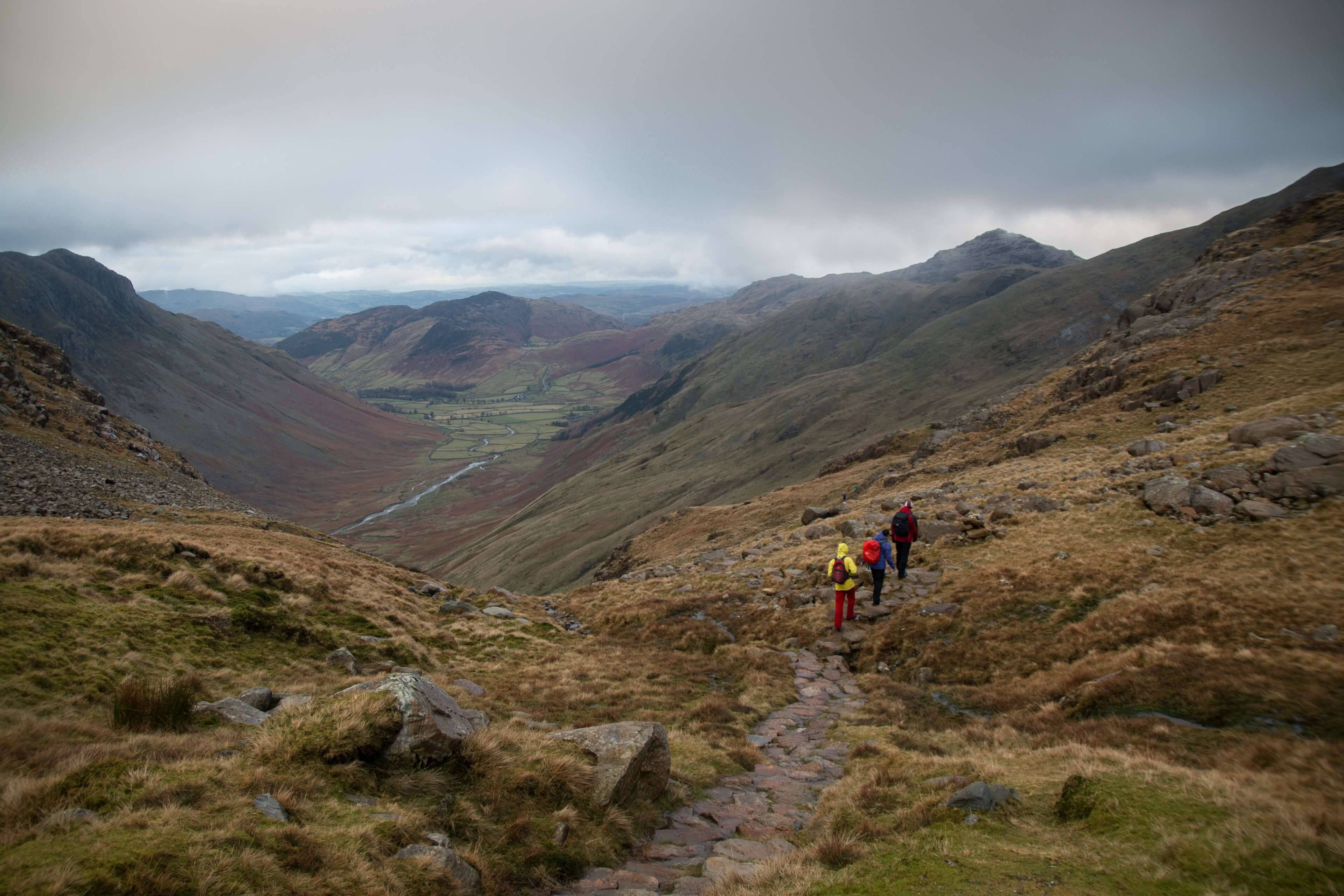 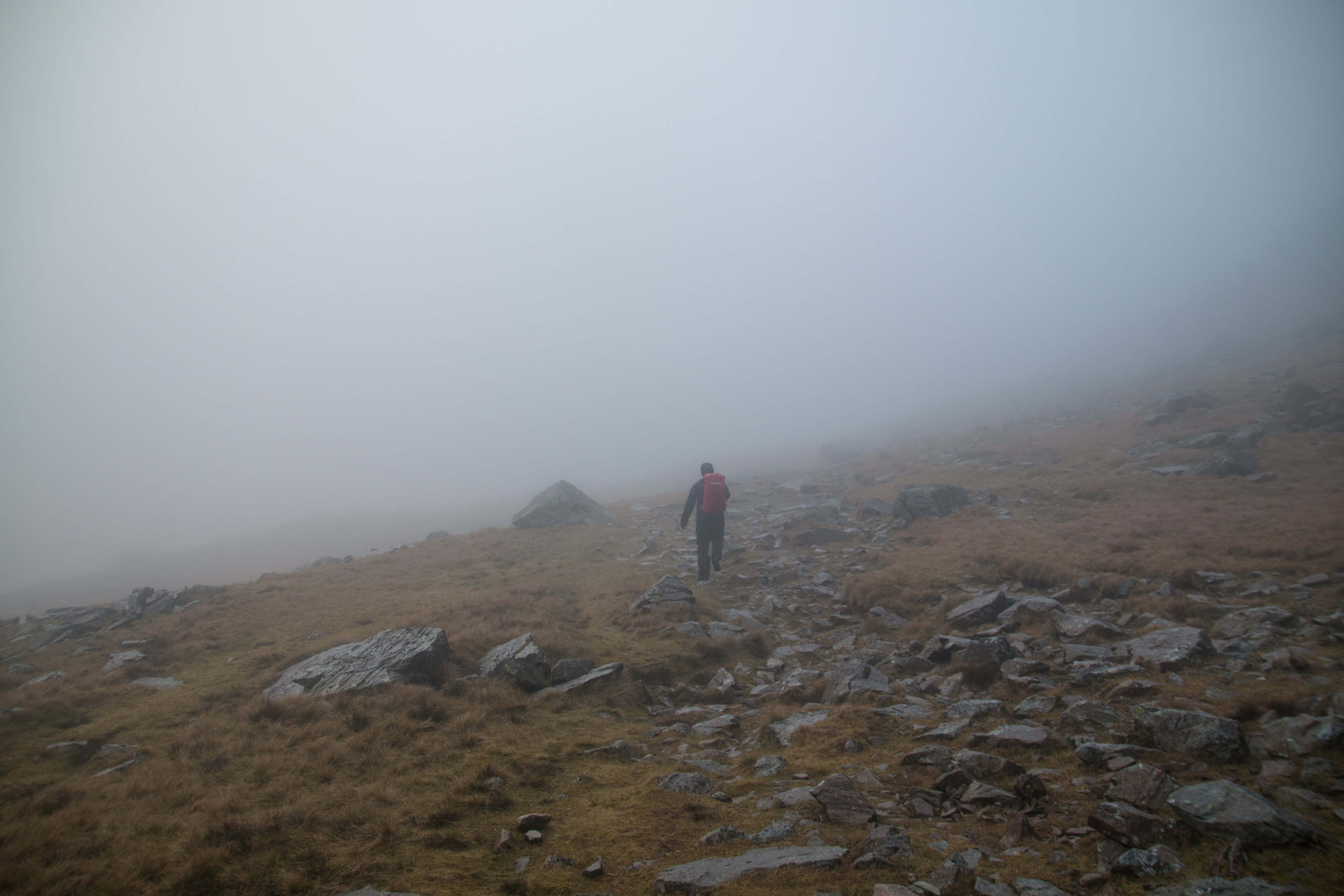 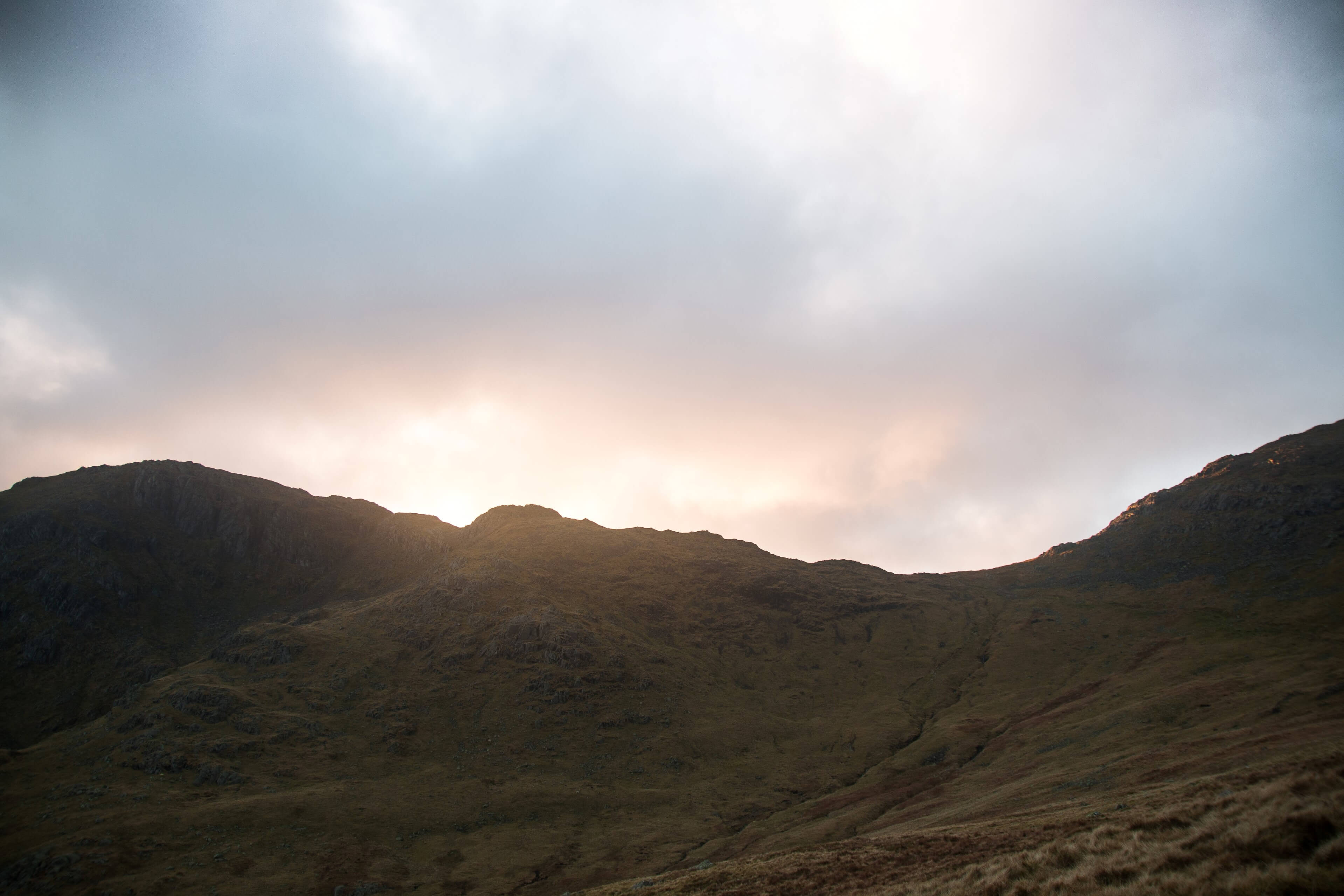 Sunset Behind The Valley 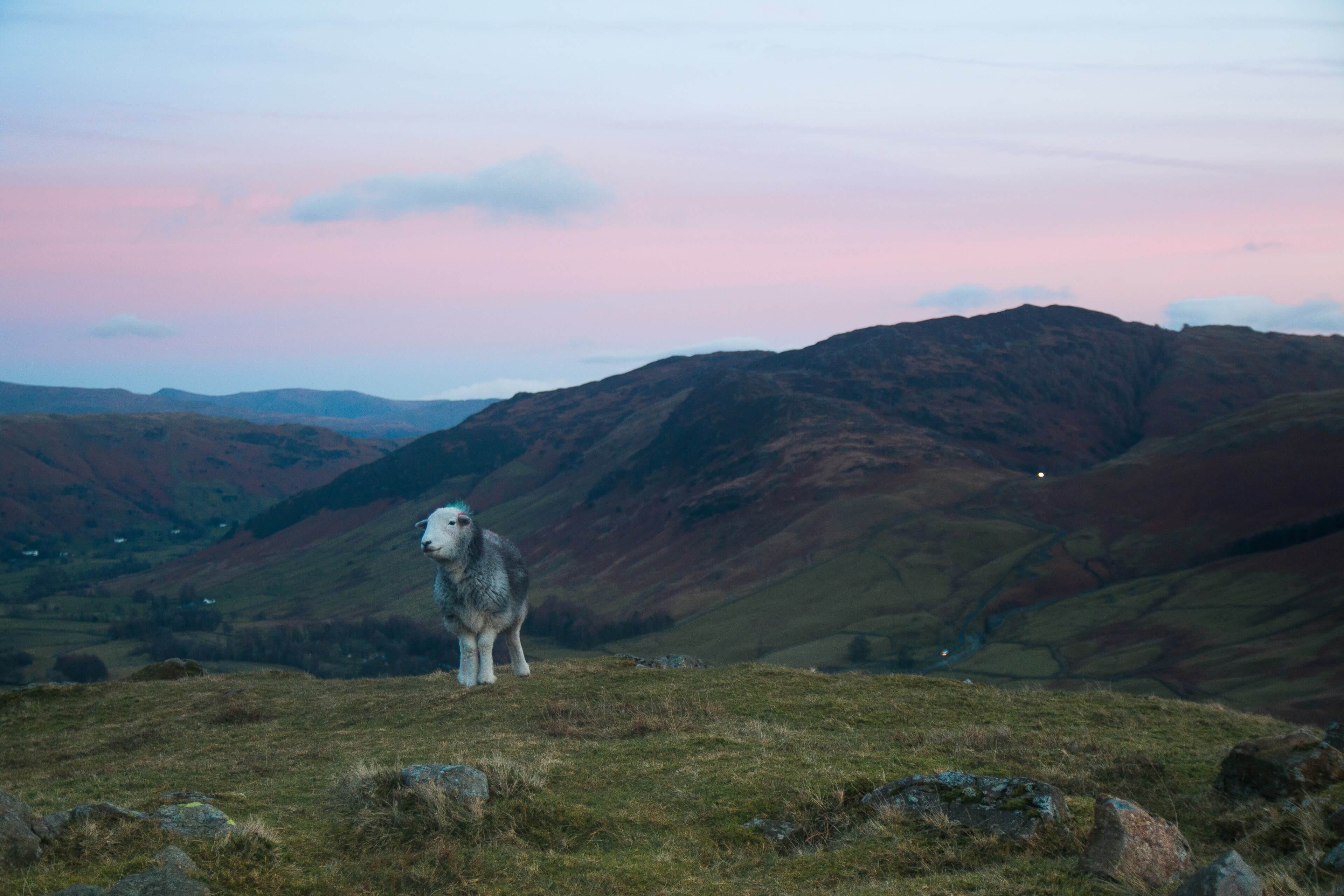 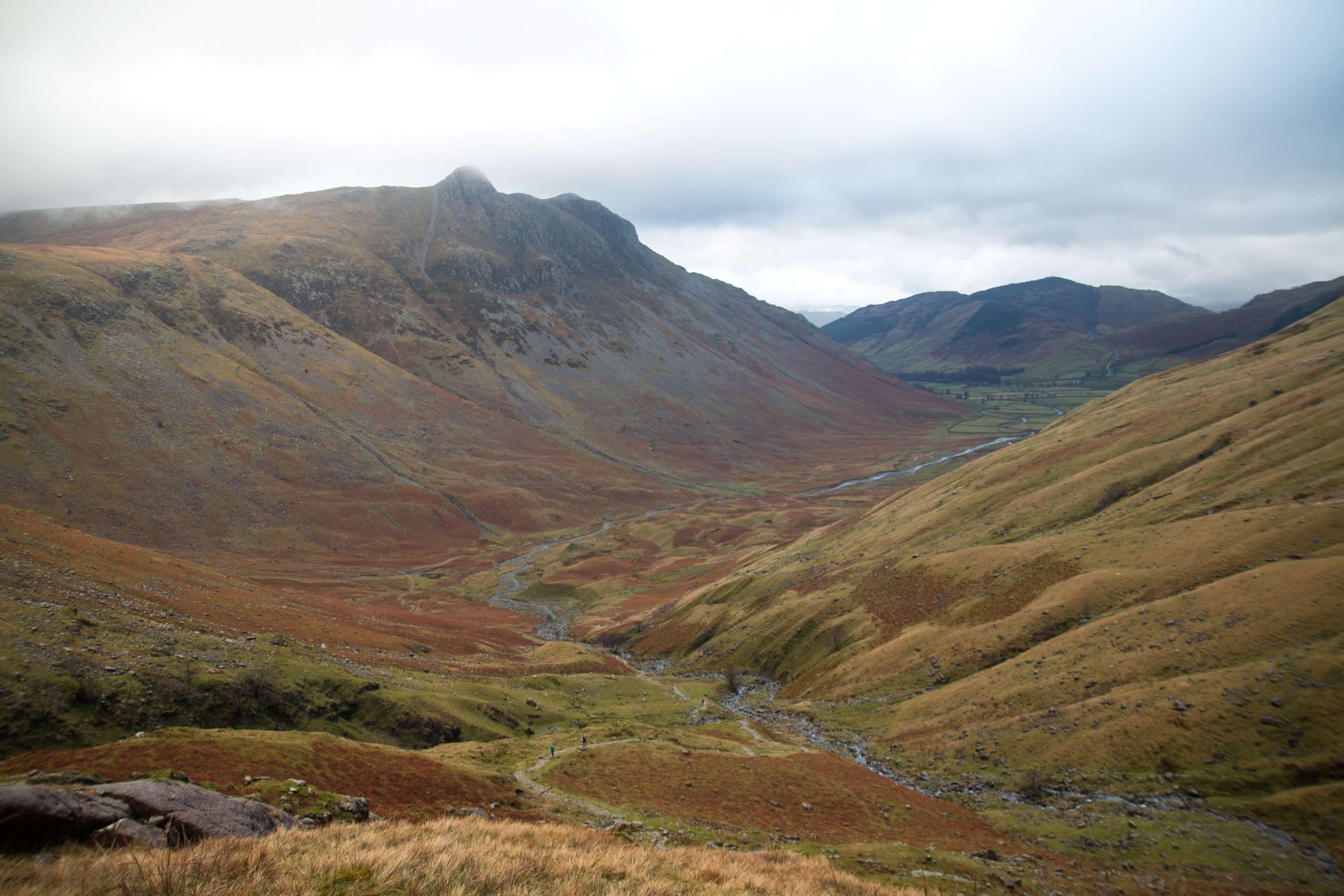 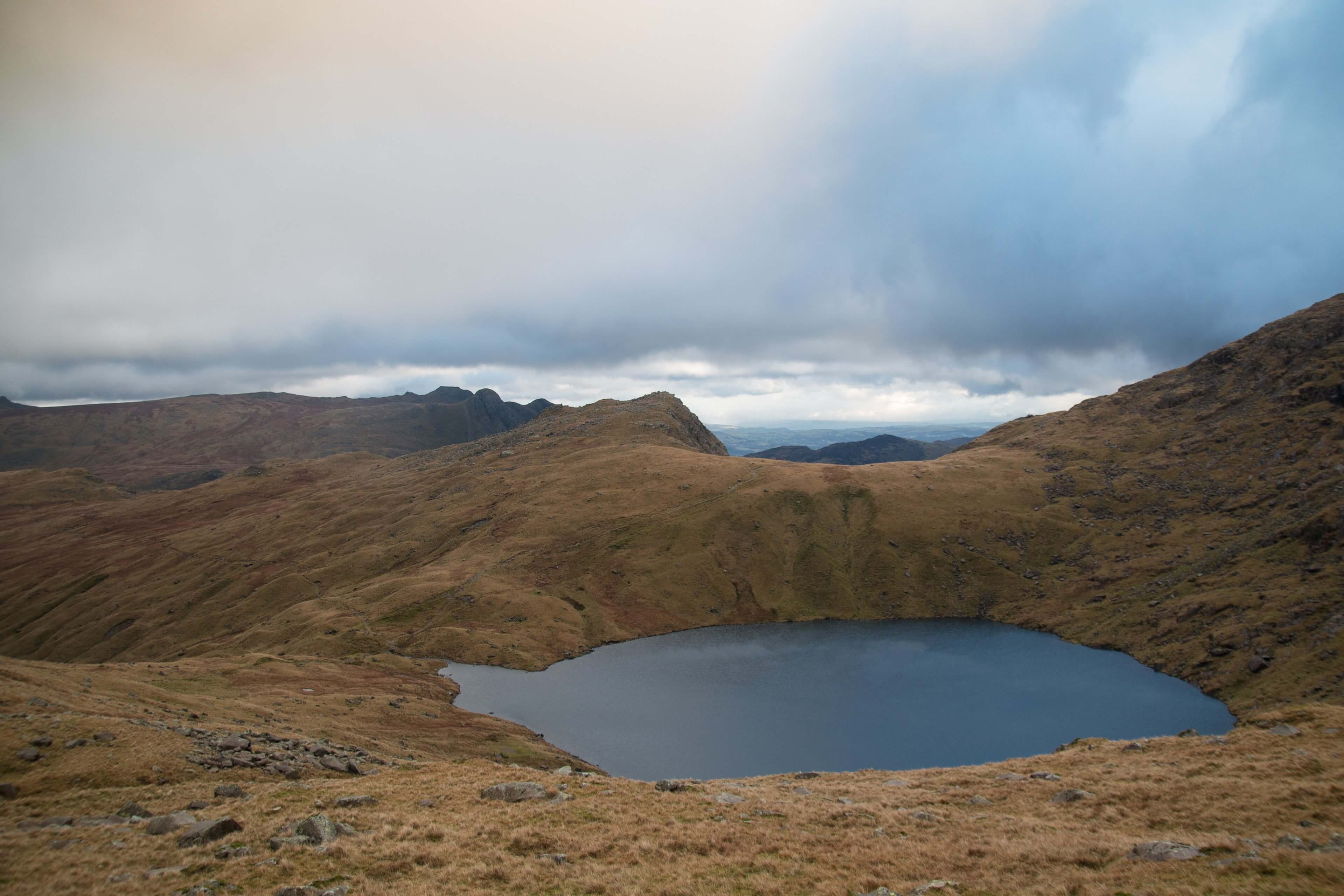 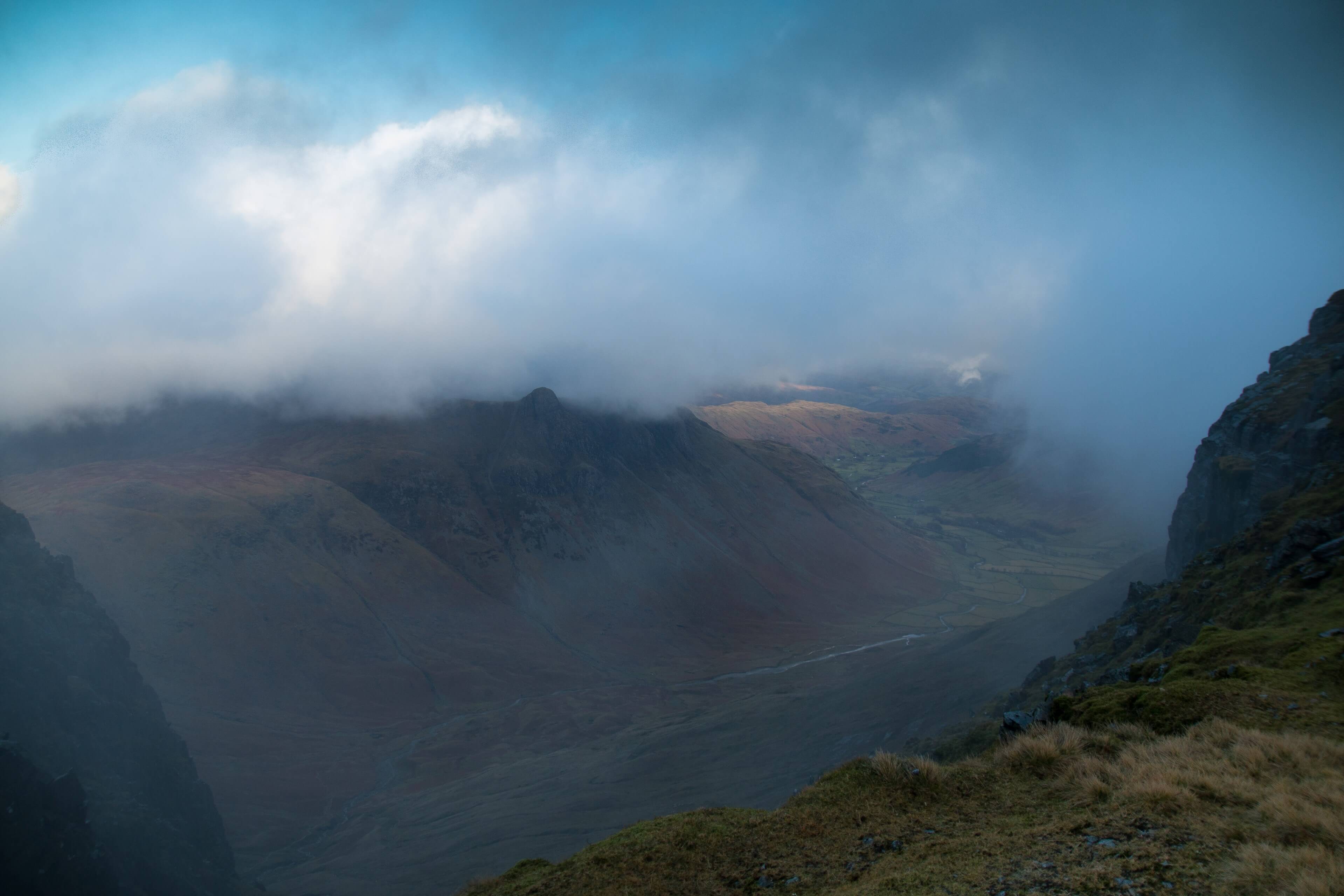 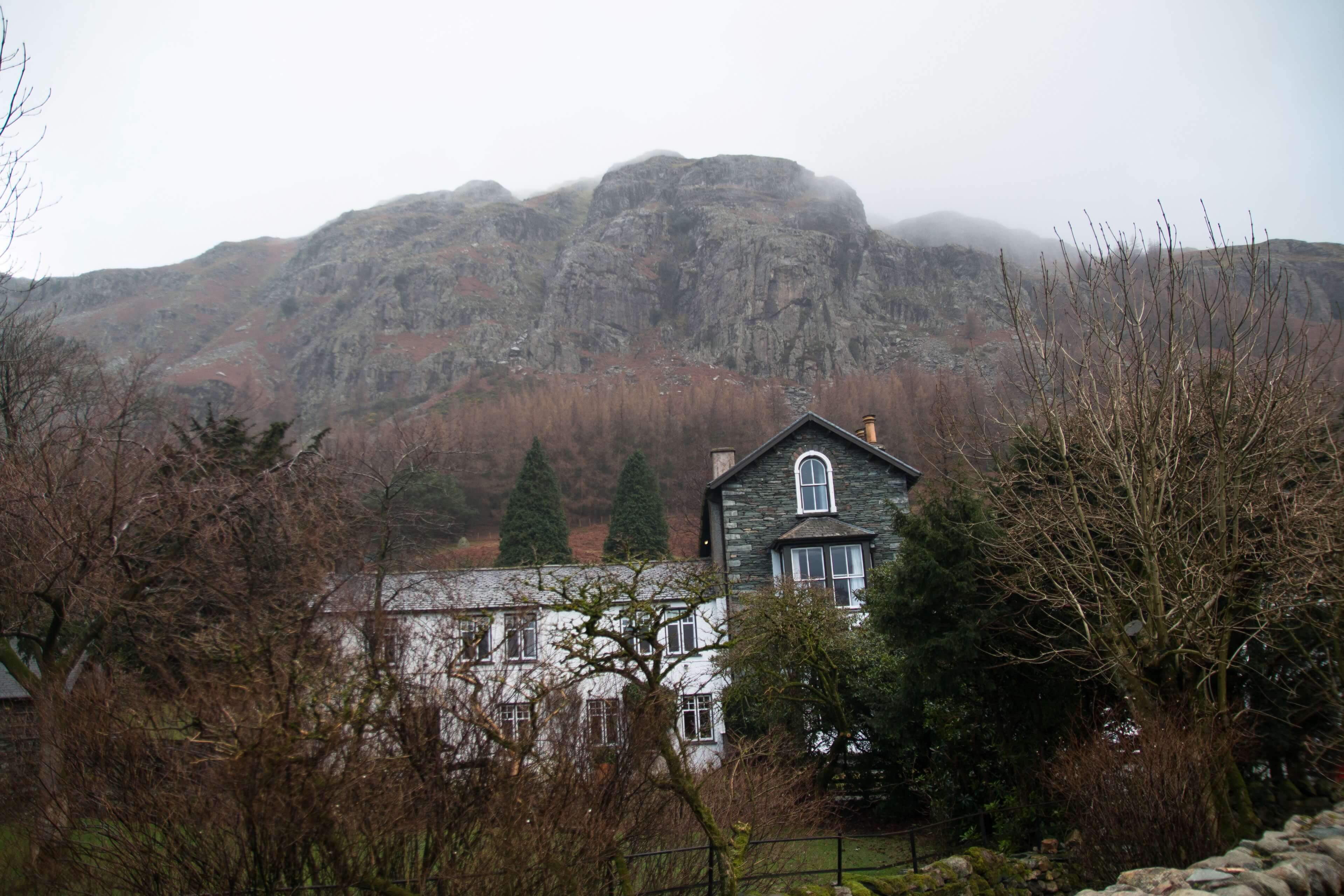 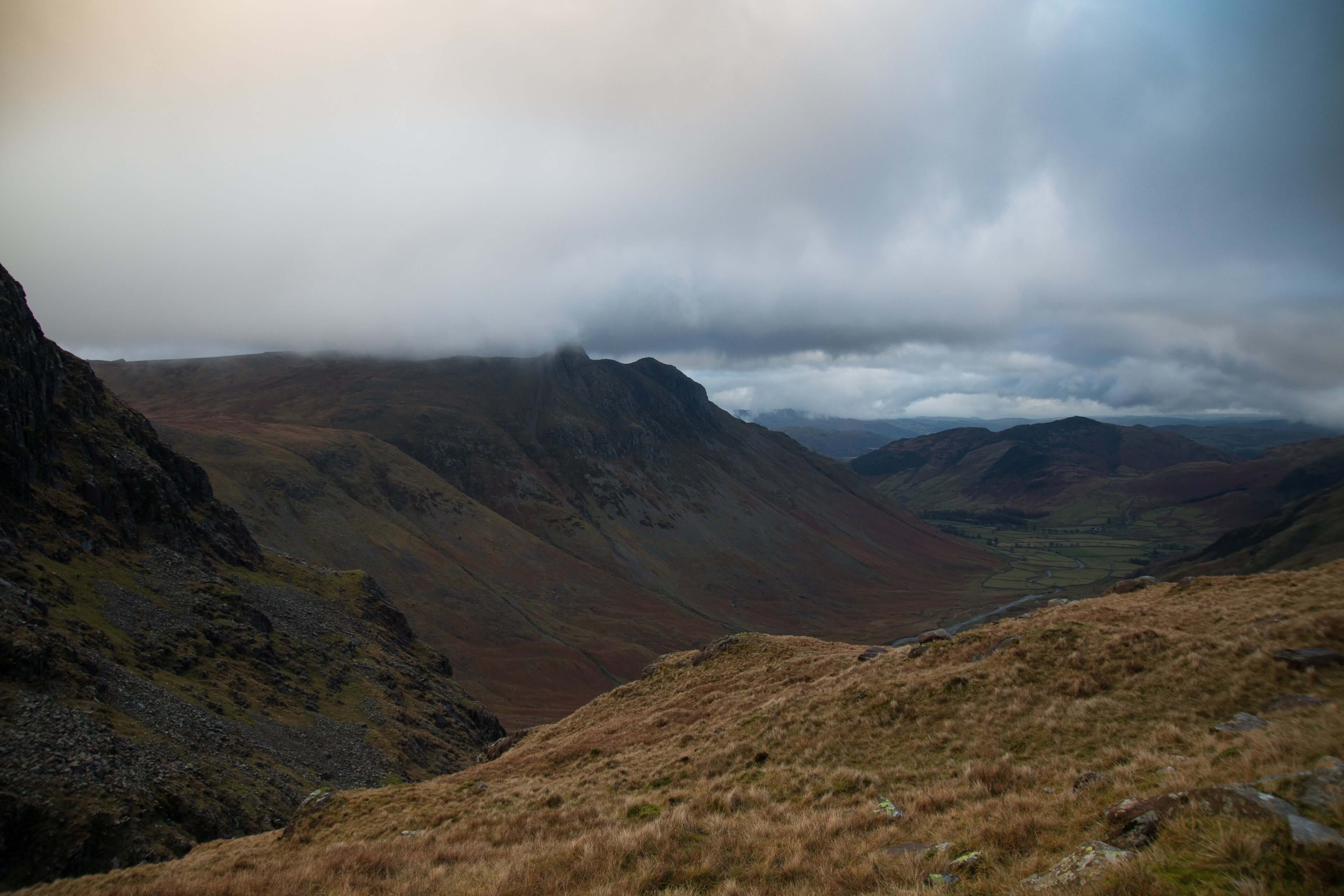 Looking Towards Pike Of Stickle 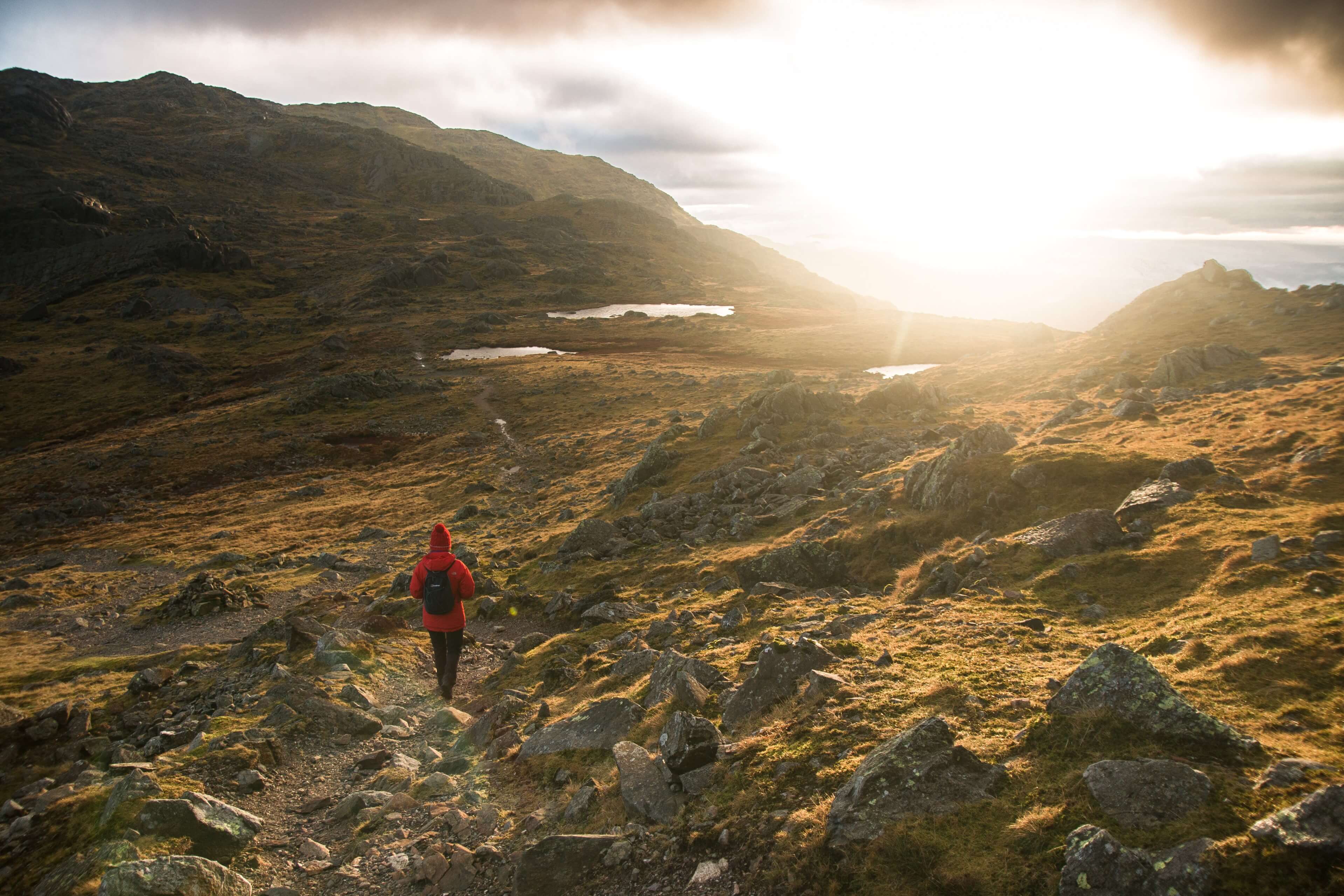 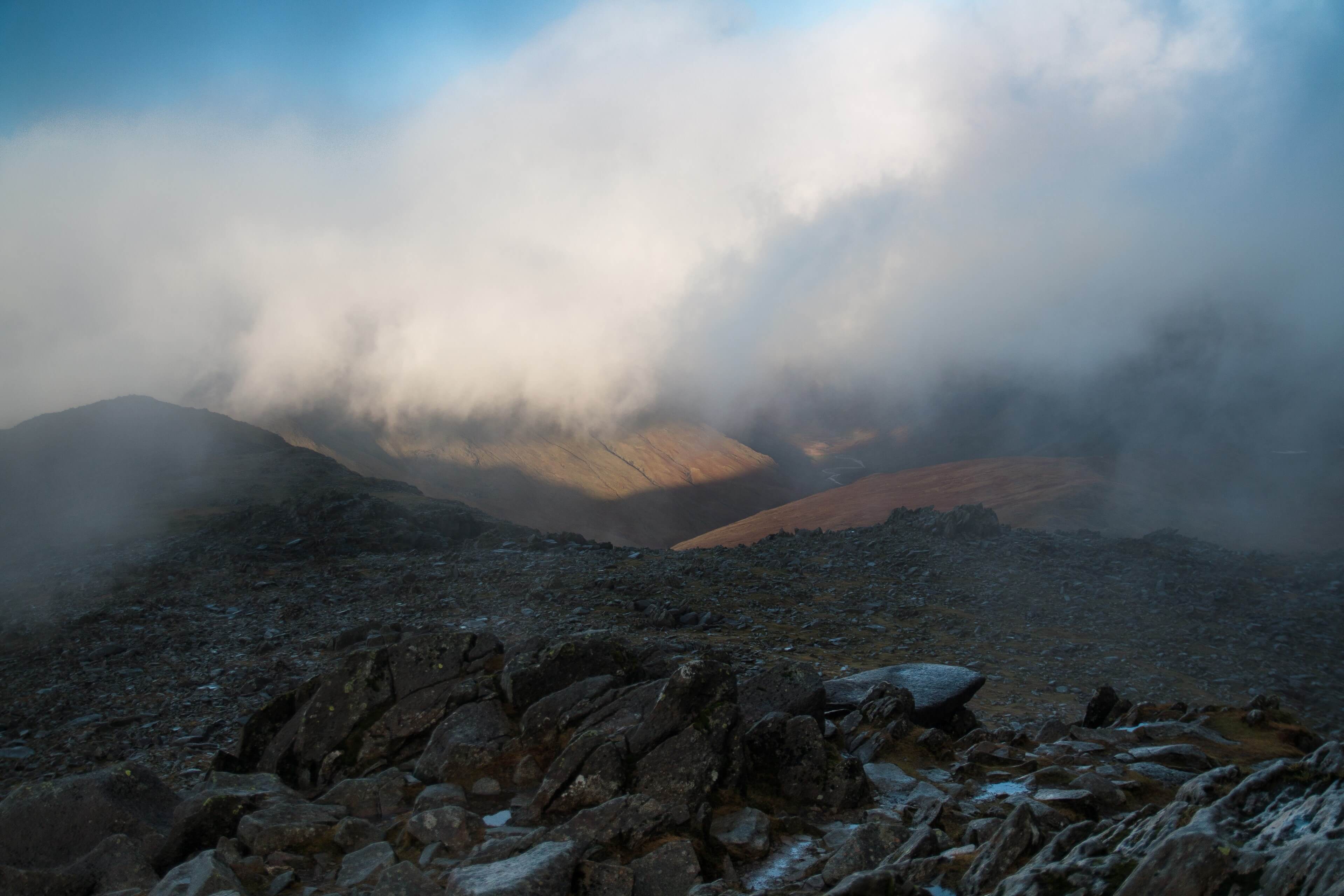 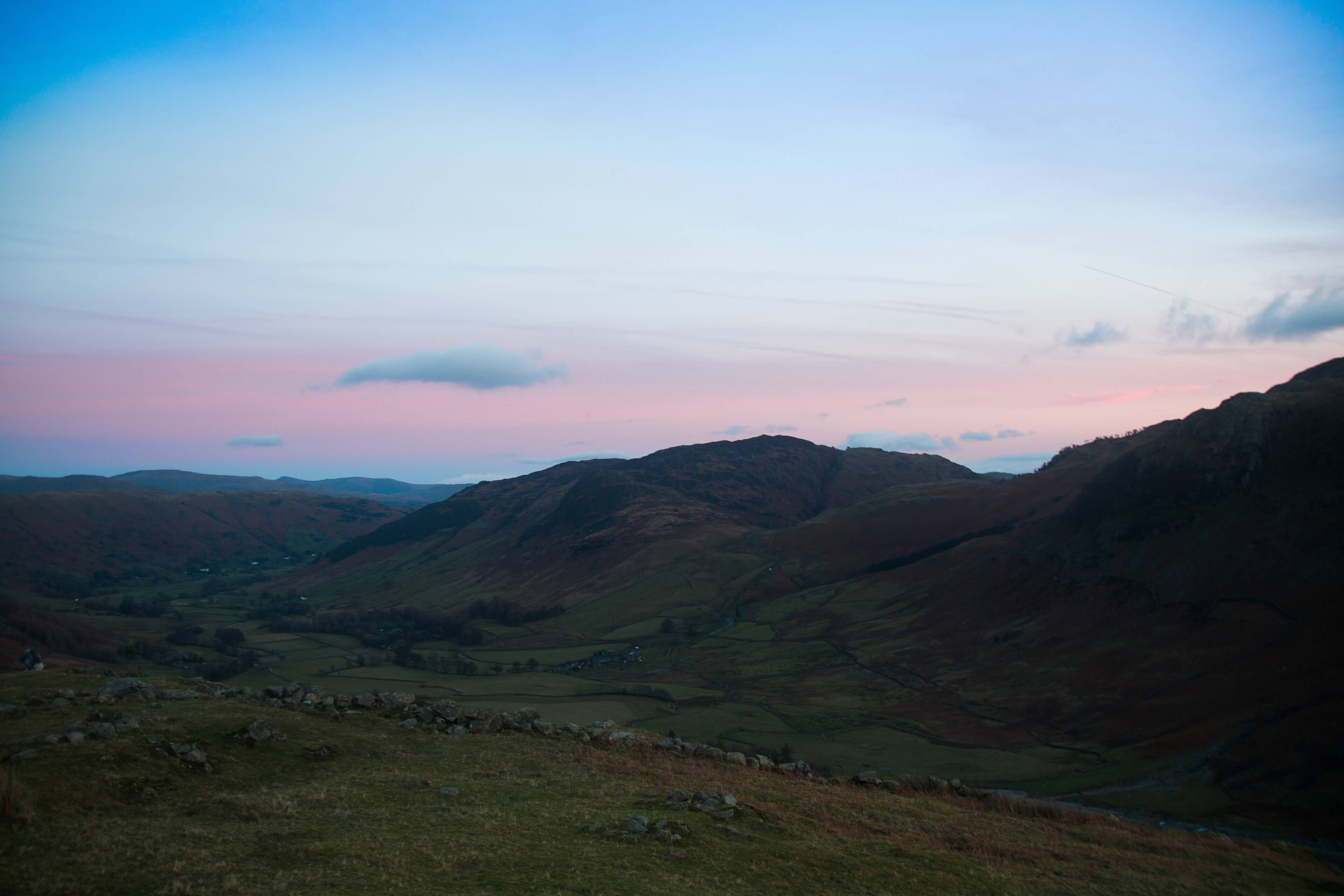 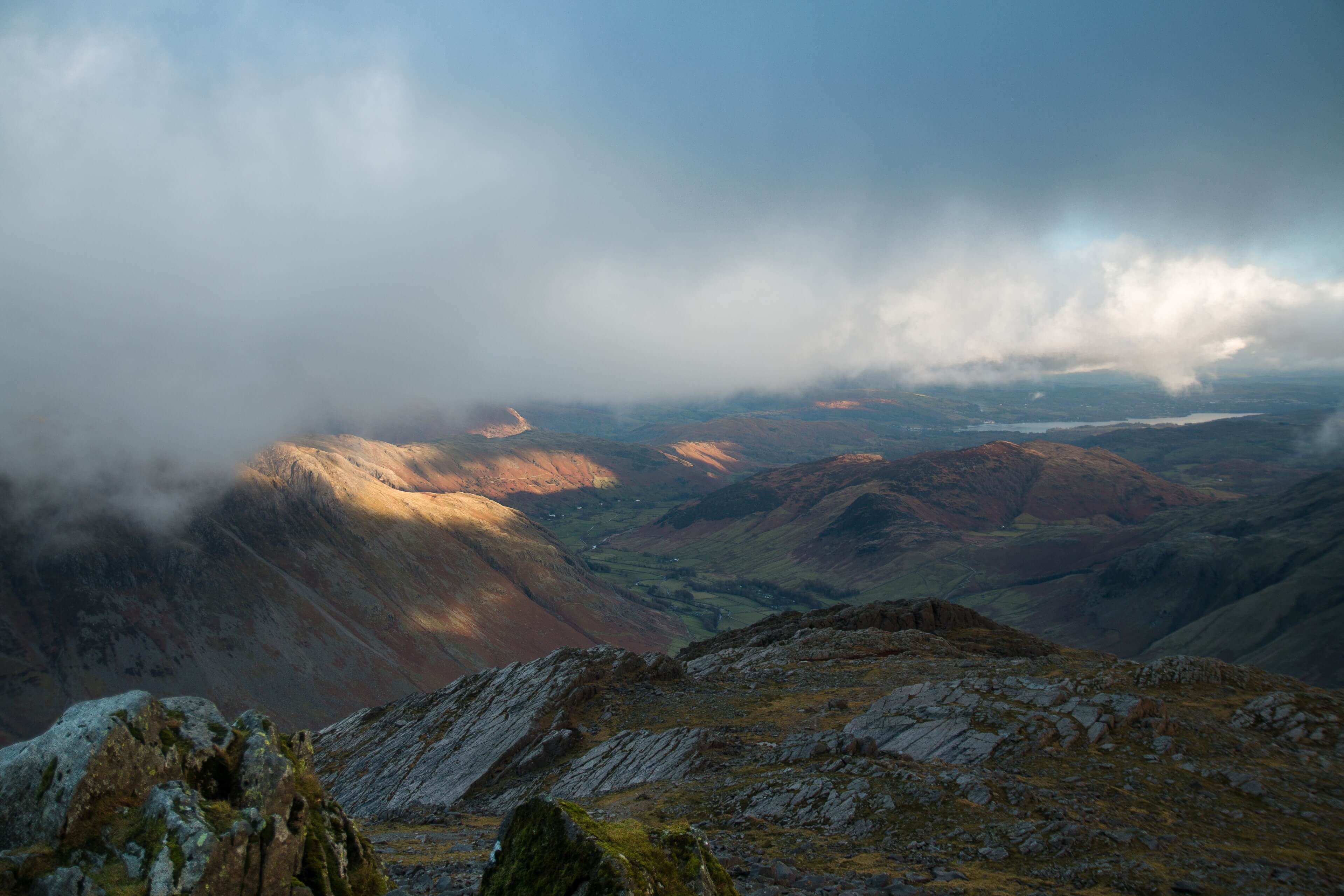 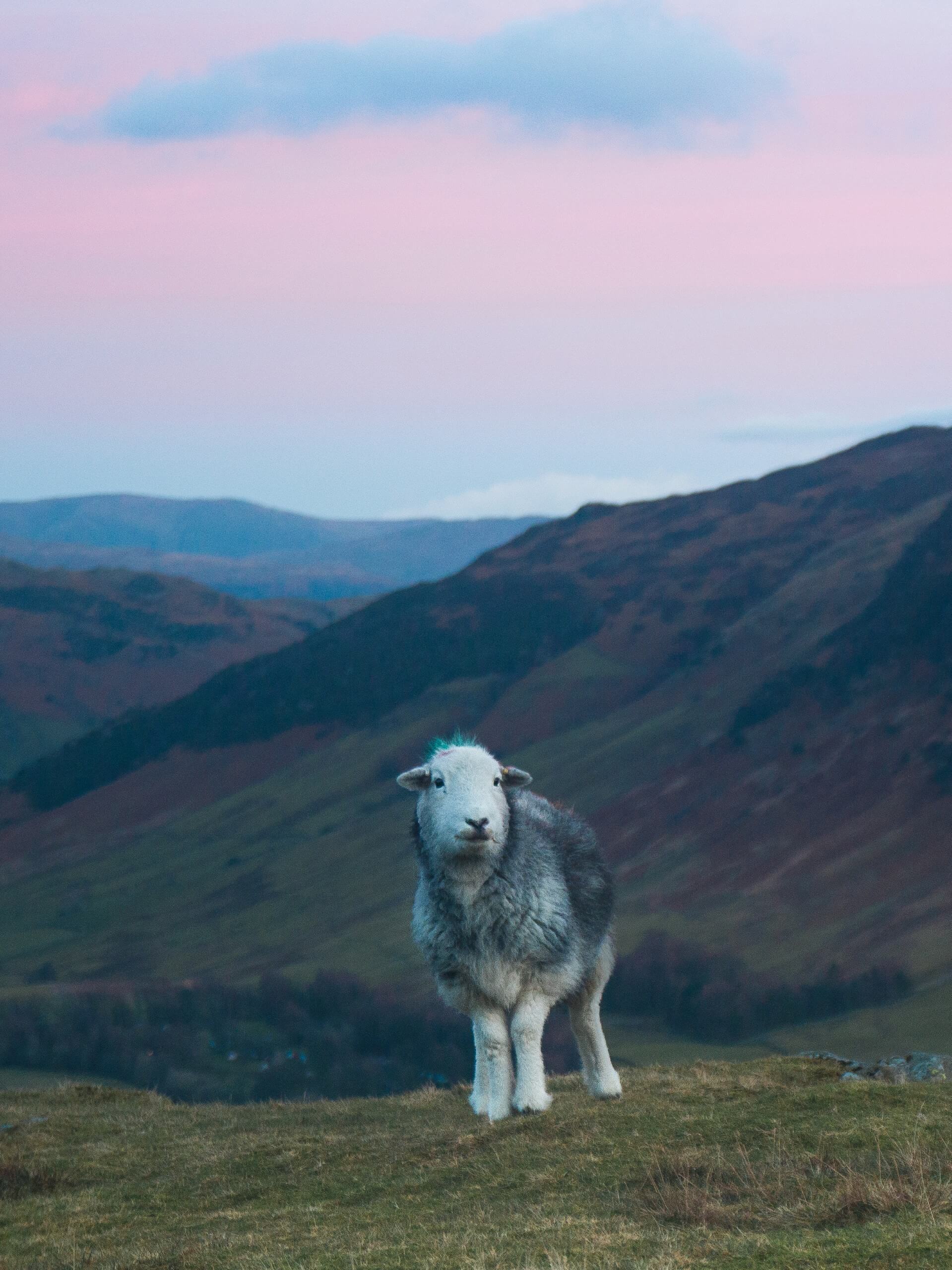 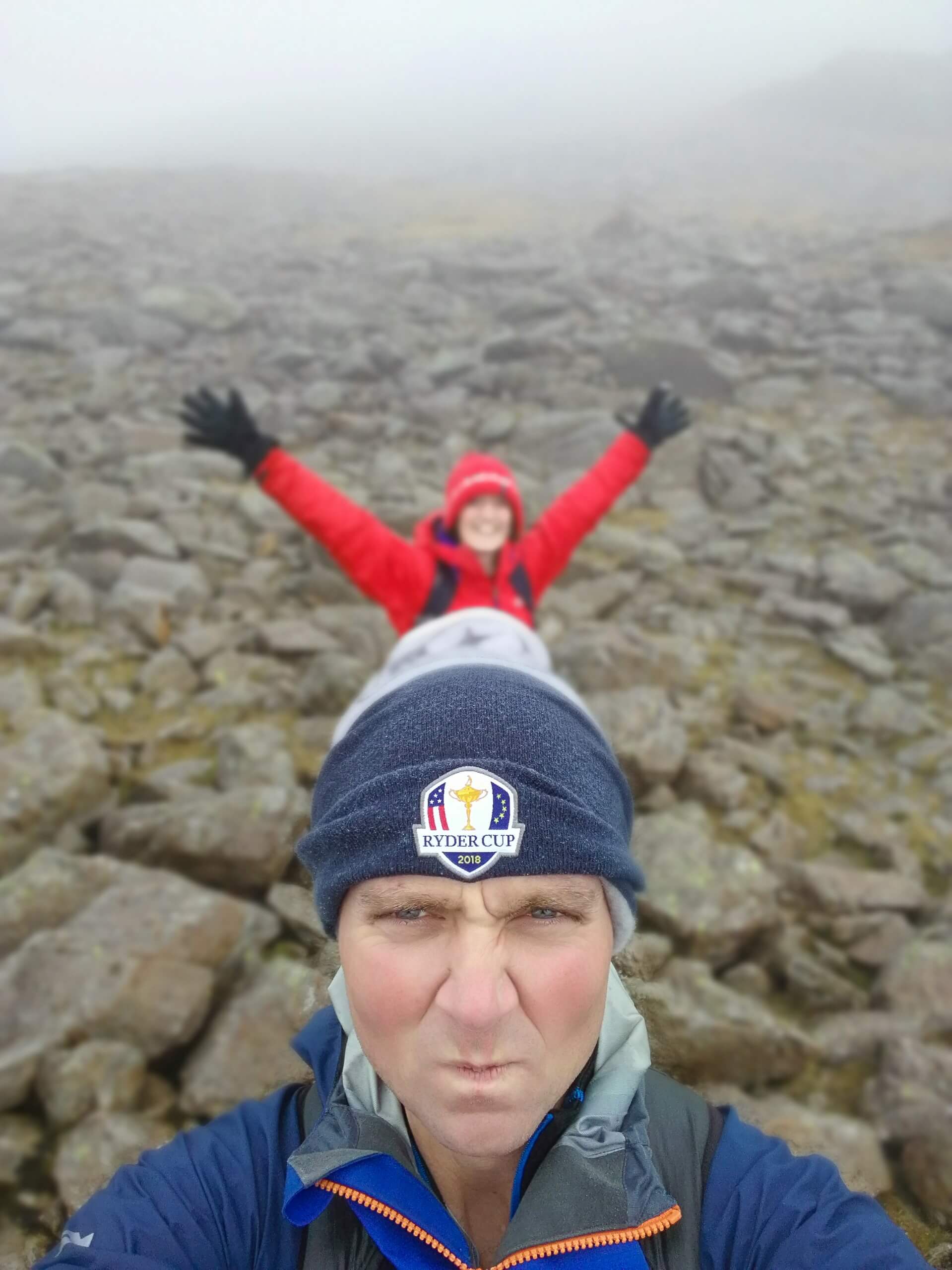 As a mountain lover I am a bit embarrassed to admit the Lake District National Park is a bit of a mystery to me. Some national parks I know like the back of my hand, such as Dartmoor, however in the lakes I’ve only climbed 2 of the peaks, known as wainwrights. The first being Helvellyn via Striding Edge (trail feature can be found on this web site) and England’s Highest Mountain, Scafell Pike, walked during my National 3 Peaks Challenge back in 2013. I’ve been longing to come back properly for a few years now and not having too much planned over the recent Christmas break, I decided to do a last minute road trip and become better acquainted with some fell trails.

It was also a great opportunity to finally meet up with Trail Exposure fan and friend Chris. Having followed her epic 500 mile bike ride along Scotland’s North Coast 500 back in August on Instagram, it was nice to finally walk, chat and share some fun adventure stories together! She joined me on this hike straight from Hellvelyn the previous day and luckily we were in for a right treat with the weather as the rest of my days hiking Blencathra and Old Man of Coniston would be through mist, cloud and very high winds!

So the highlight and focus of this trail is the pyramid shaped peak of Bowfell (standing at 902m) located within the Great Langdale Valley region of the Lake District. The route itself is a 9.5 mile circular starting and ending at the Old Dungeon Ghyll Hotel, west of Ambleside. After a late arrival by myself, (having had my sat nav take me via some rather narrow steep roads) we set out from the Hotel around 10am in rather miserable wet and grey conditions, luckily though it was not cold! The first few miles involve walking the path North West along the bottom of the valley along the Cumbria Way path. Even in grey conditions the surrounding fells of Pike of Stickle (709m) and Loft Crag (682m) were quite clear and looking rather ominous! The path is level and easy to follow and luckily there was hardly a soul to be seen. Once towards the end of the valley you come off the Cumbria Way and start ascending westward up towards Rossett Pike (651m) and Angle Tarn. The terrain starts to reveal its wild black loose rock geology as you ascend, it kind of reminded me of the Rohan terrain from the Lord of the Rings films and also a great trail in New Zealand I walked called the Heaphy Track. (Also featured on this website under world long trails)

Once up at Angle Tarn the rain threatened but also showed some signs of cloud breaking. The views from back across the Great Langdale Valley were pretty fantastic now we were at higher elevation. Once you circle around the tarn you turn and head southbound carrying on upwards. The terrain becomes a field of stones and boulders, a clear path being harder to follow so navigation can become difficult in low visibility. It’s also really loose so care needs to be taken walking across.

Now at this point of the walk we met and passed a few hiking groups, each walking slightly different mountain routes, but for all of us the real beauty of mountain walking that day was to reveal itself. After a brief period of dark overcast cloud, blue skies emerged and the mid-afternoon glow of sunlight shone across the surrounding mountain ranges. It’s the payoff that you hope for when you start any trail in grim conditions and if it happens it’s just incredibly rewarding.

We arrived at the final set of large boulders to scramble 5 metres or so up to the peak of Bowfell. The views of the Scafell range just looked incredible. The rolling cloud was now lower around the mountain ranges, which for a photographer is just perfect to capture.  We both stood on Bowfell for a long time and as the afternoon light changed to sunset light the views got even better. To the south west the light across the valleys and rivers glowed and glistened. I was in awe of the beauty of this place. There’s no doubt that lighting pays a big part of the emotional connection to any landscape. I’ve seen some pretty amazing places around the world, but these views rivalled any them!

Sunrise was getting closer and with still a good few miles left to walk, it was time to leave the sweet views and descend. It’s a fairly straight forward descent straight along the ridge line south east all the way back down to the base of the valley. It is steep in places and takes quite a while. To be honest we got caught out and dark was creeping in quickly, although luckily the clouds had completely disappeared and a beautiful pink glow could be seen on the horizon. Half way down I was particularly fond of a sheep with a little punk green tuft of hair on its head. Of course I got a snap!

As you reach the valley floor you head straight through a farmyard, which was a bit weird as it was quite active with livestock goings on as we passed through. From here just a short walk along the road will bring you back to the Dungeon Hotel and the rather quaint Hikers bar which was particularly crowded considering not too many people were on the trails that day! Finish time was just before 5pm and suffice to say we rewarded ourselves with coffee and cake and enjoyed the pleasant atmosphere with our feet up!

So it was a nice long 7 hour walk in the end, albeit with many breaks. It was a fantastic hike though and certainly my favourite during my visit to the Lake District.  No disrespect to Old Man of Coniston and Blencathra of course! In terms of ability it’s not too hard a walk and never feels like a slog on the ascents with its reasonable gradients. I never felt the peak of Bowfell was too vulnerable, as long as your navigation is good. There are also so many options of alternative routes to choose, this is just one of many possibilities. If I come back during the summer with more daylight hours I would most certainly head round to Scafell Pike as well!

The Lake District does not feel like so much a mystery to me anymore, the trails I have now done have helped me form a mental map in my head. The park is now starting to make sense to me, however of course I have just scratched the surface. I can’t wait to return for more Trail Exposure adventures.

If you have any questions about this hike then please feel free to message. GPX route available.