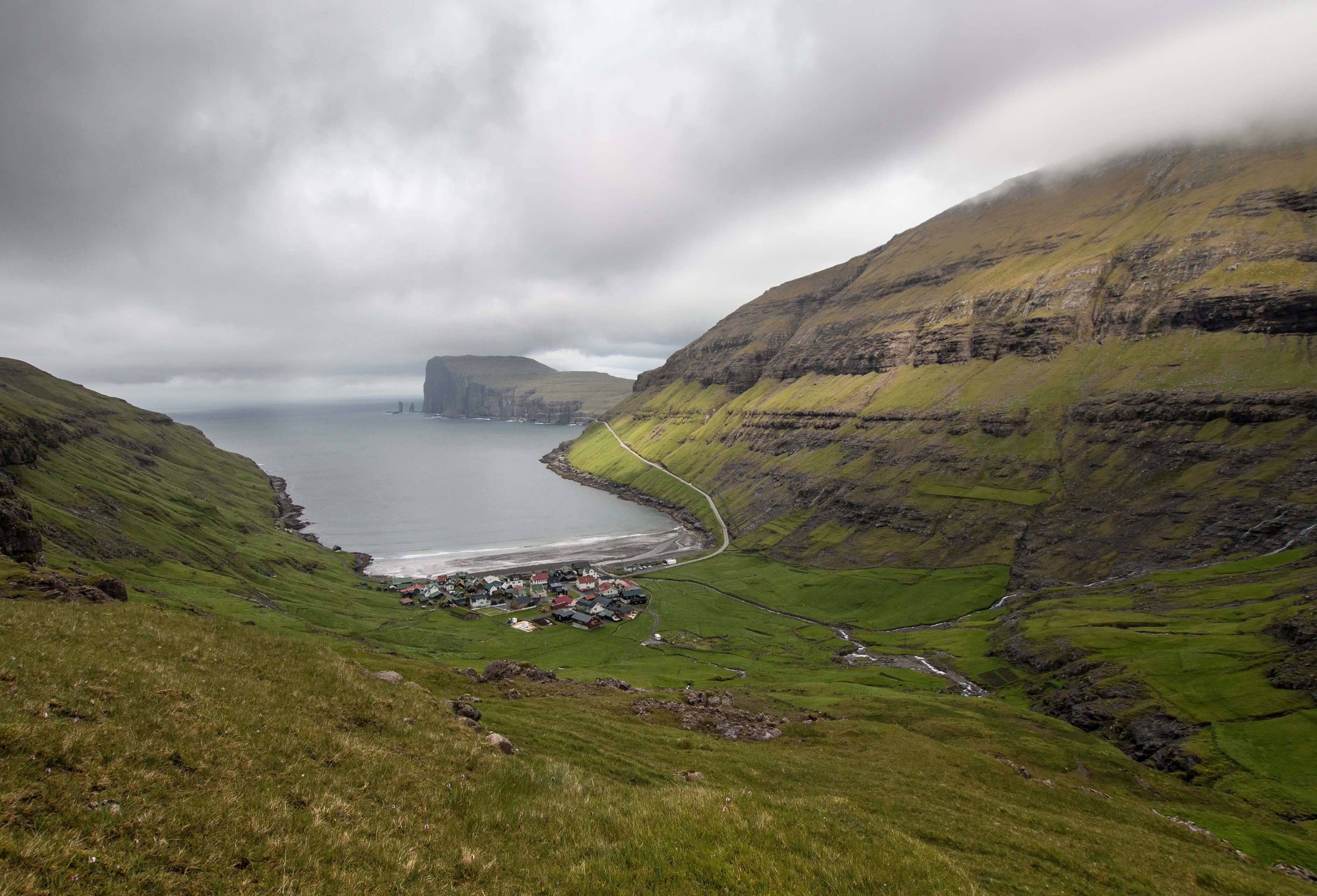 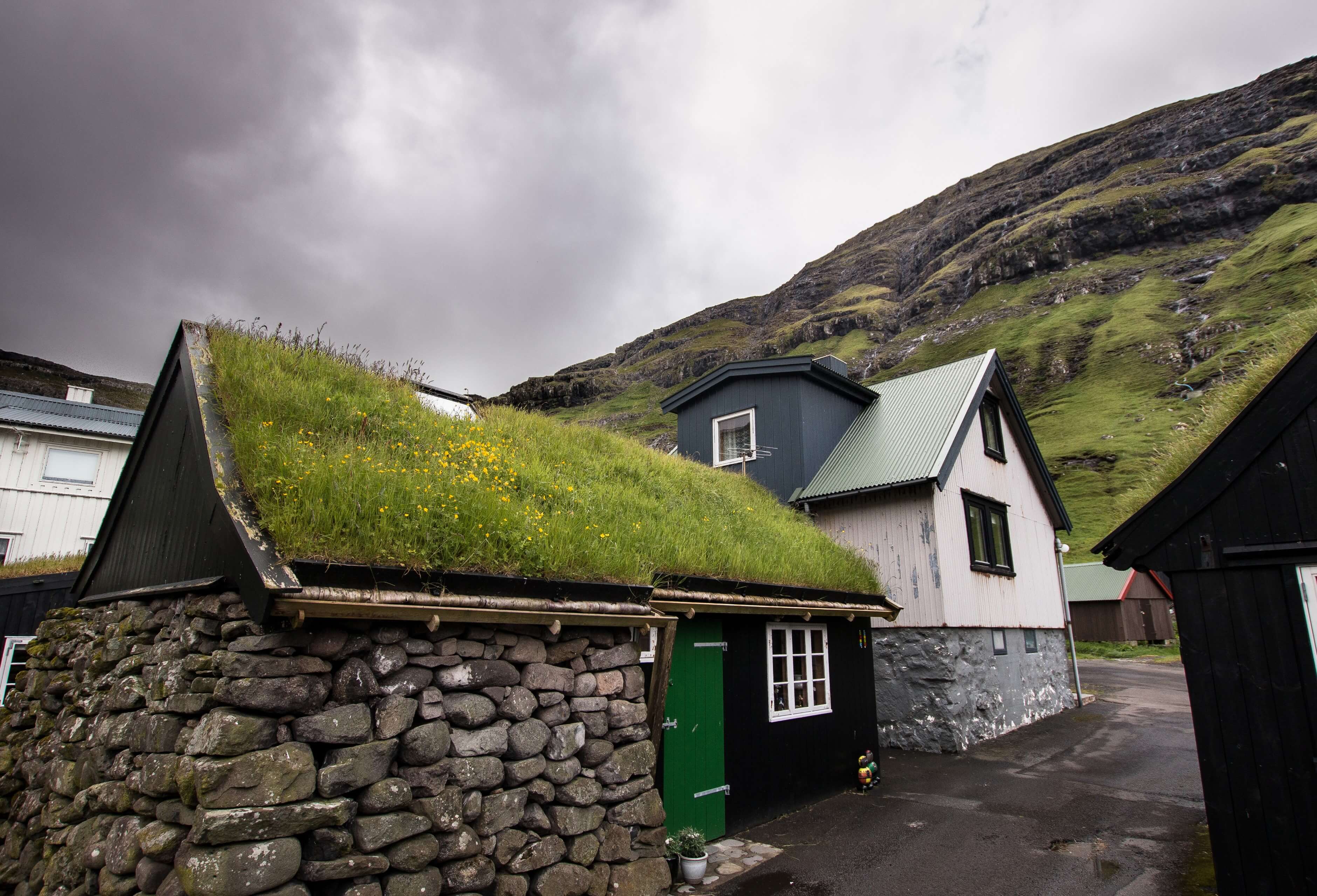 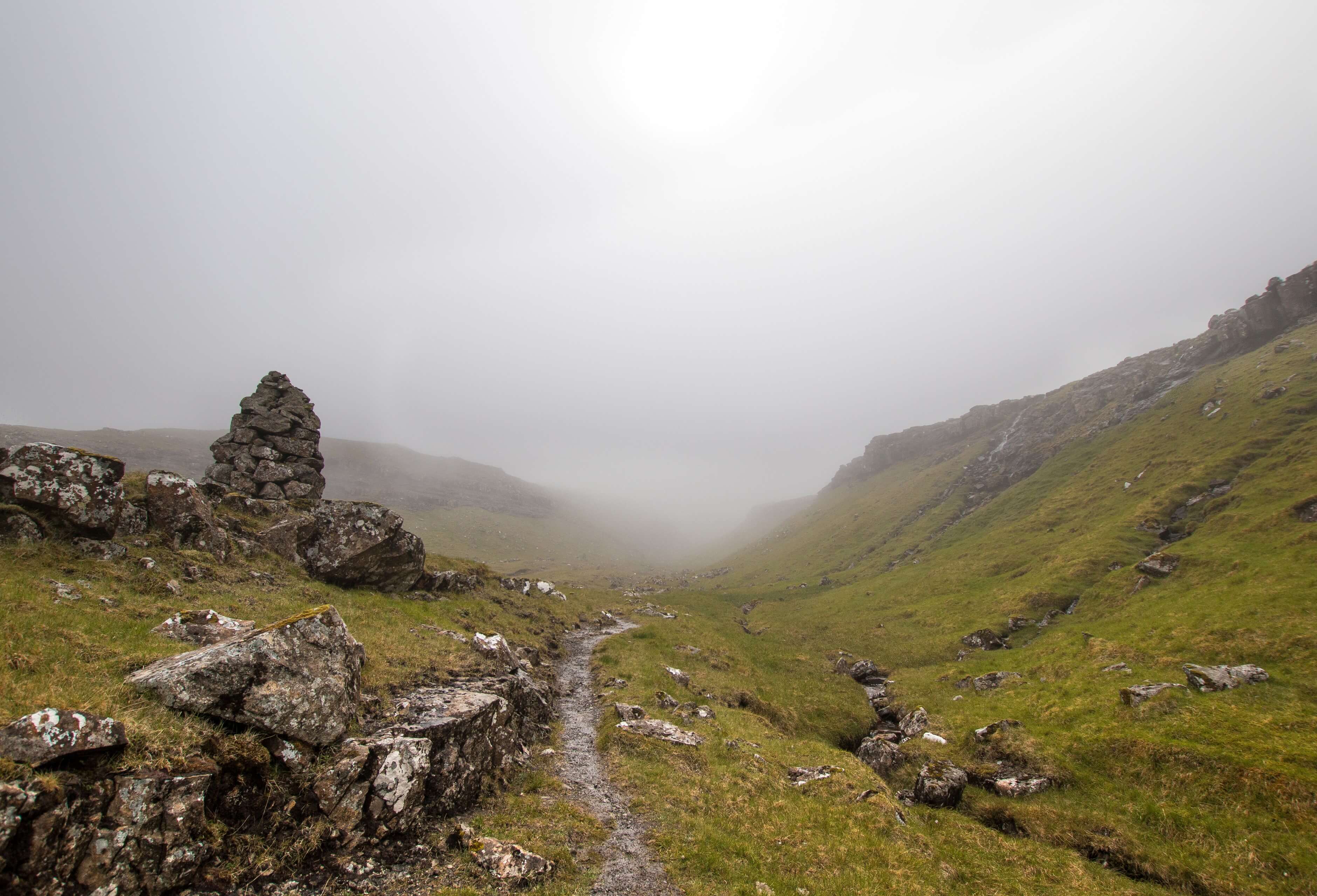 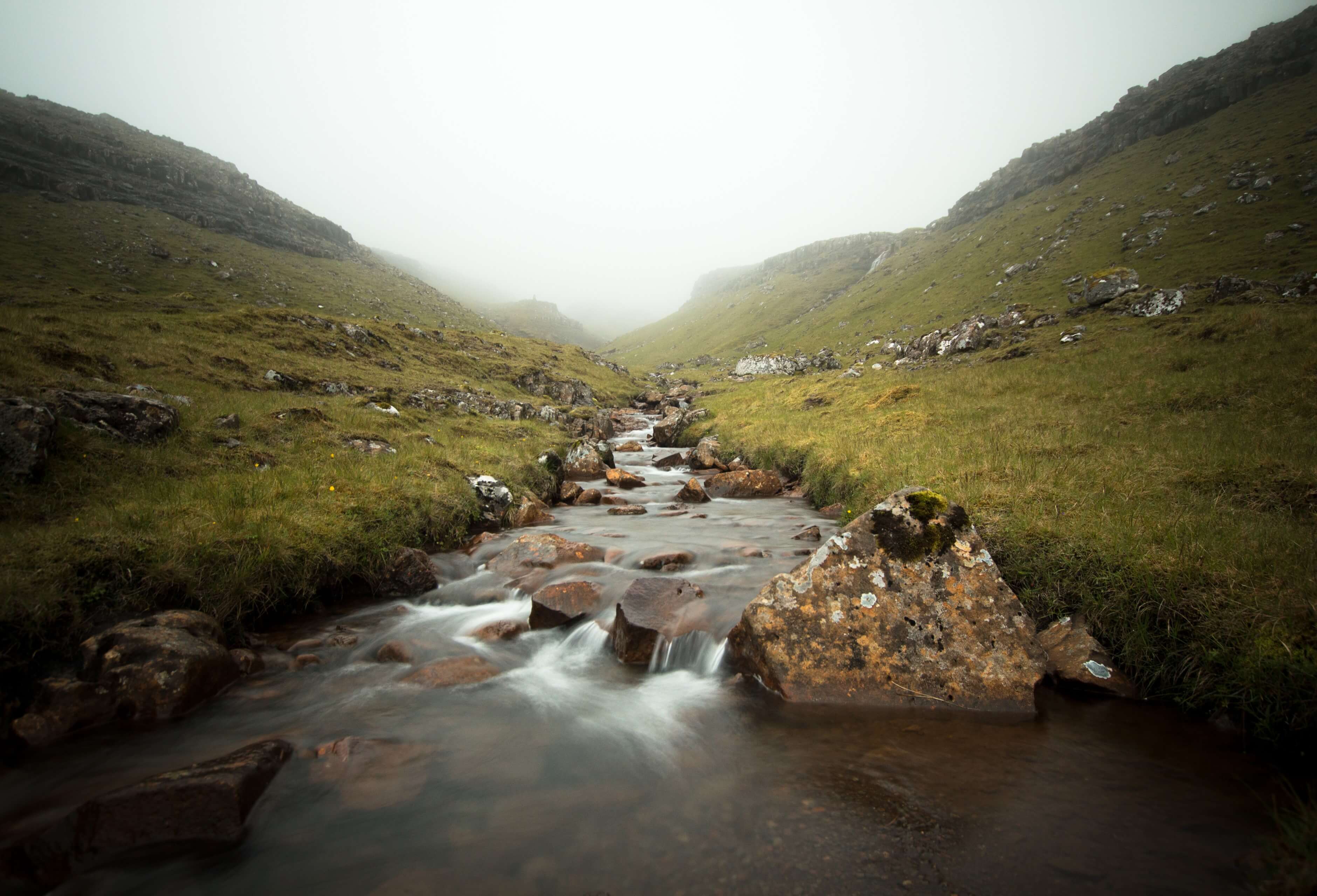 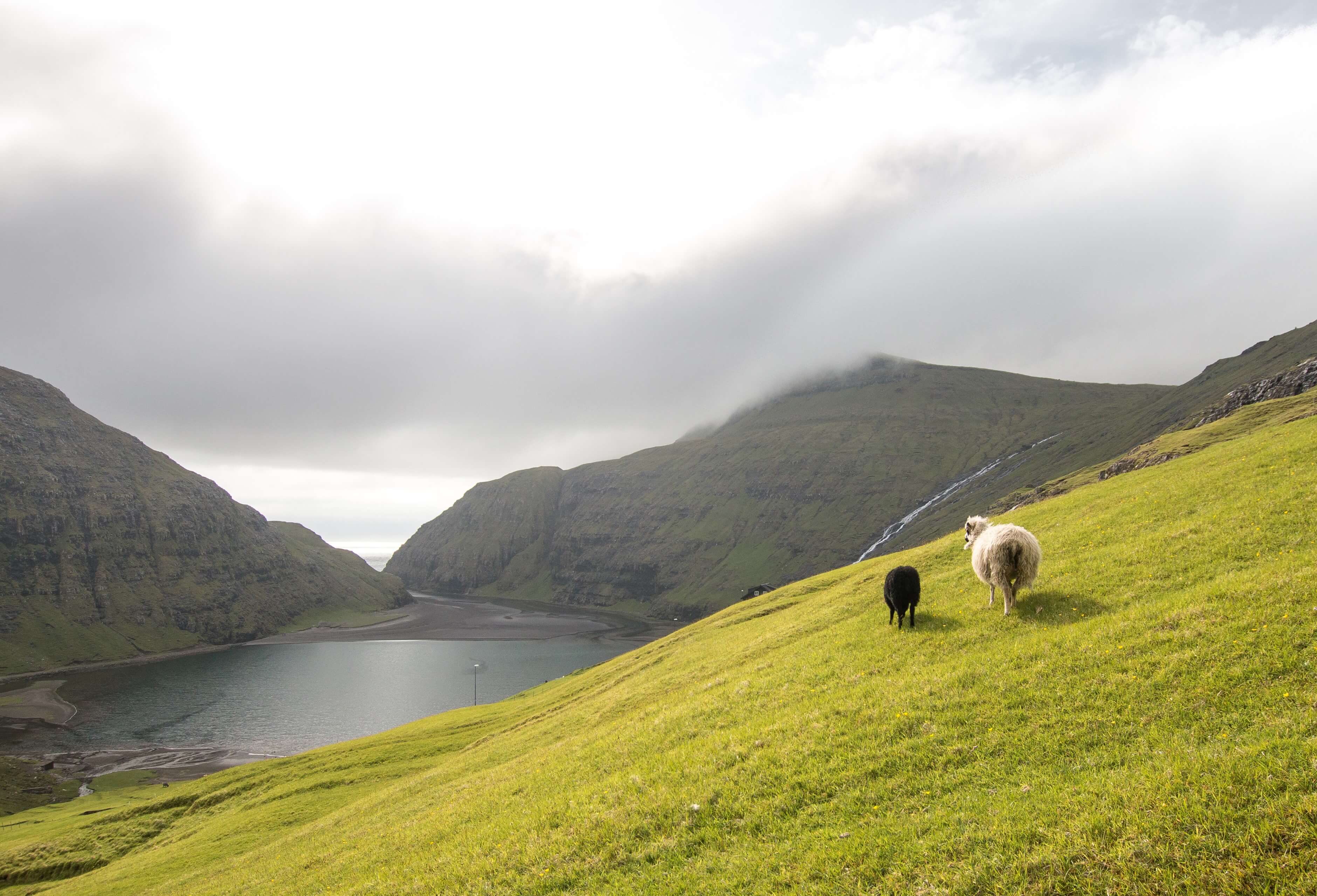 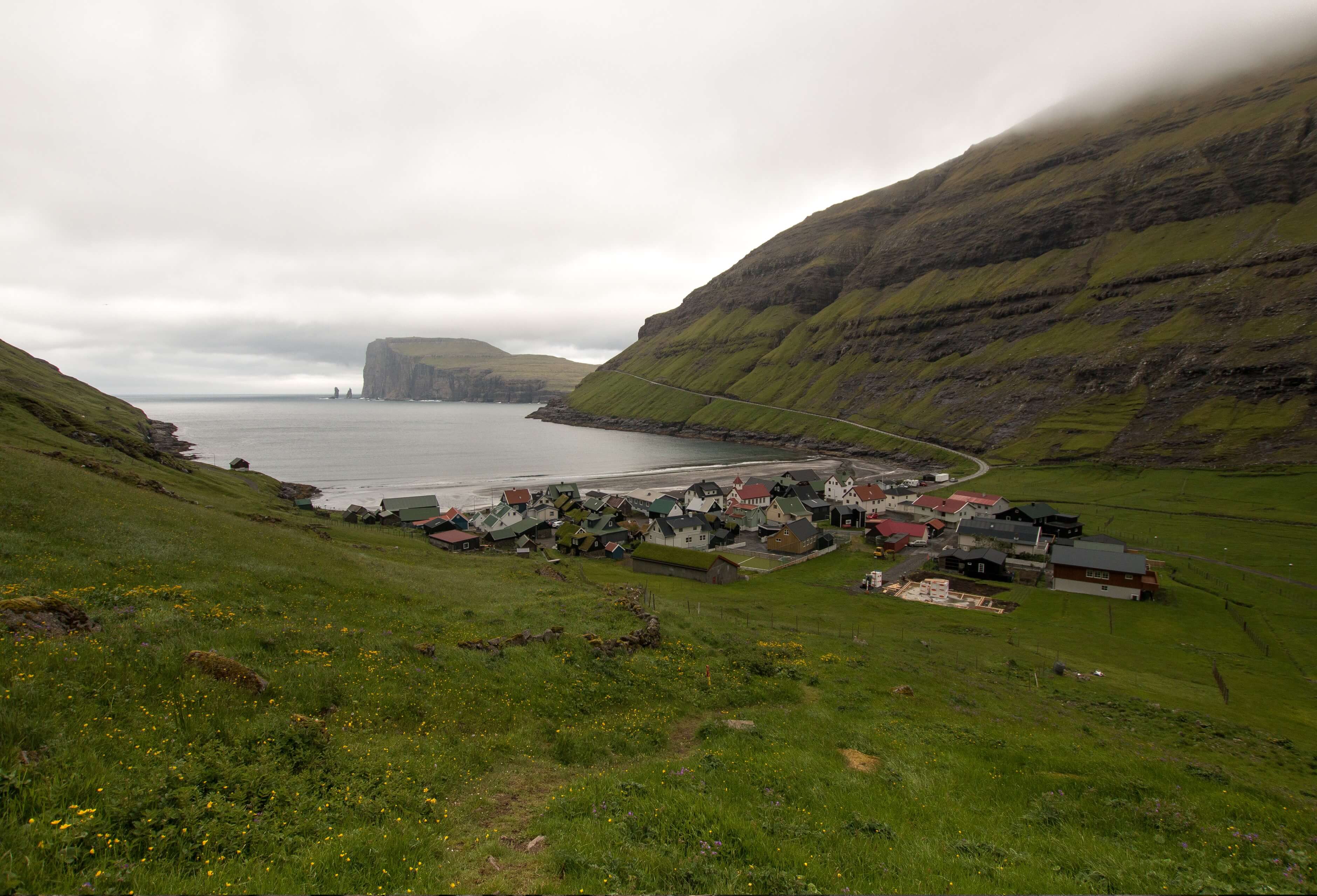 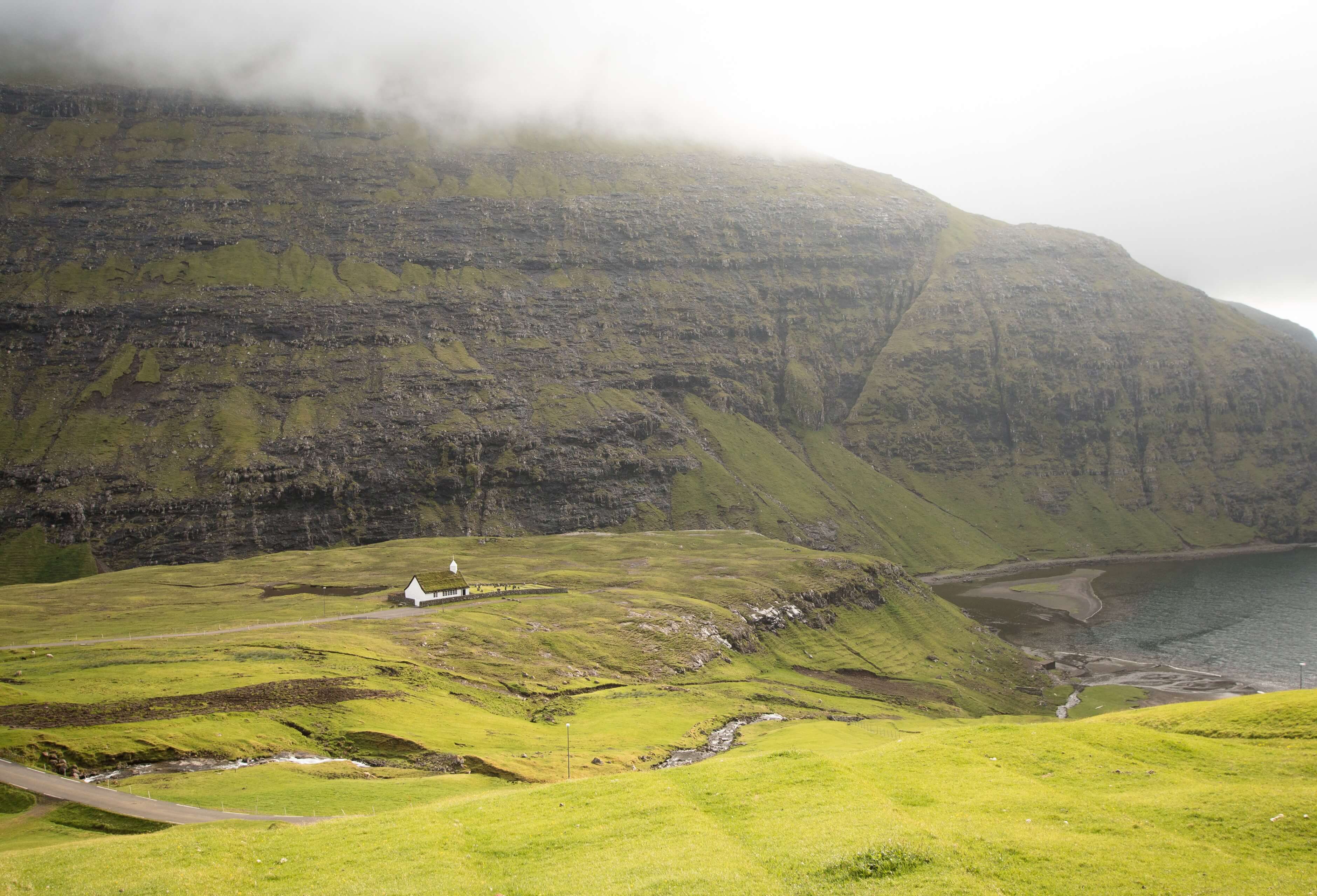 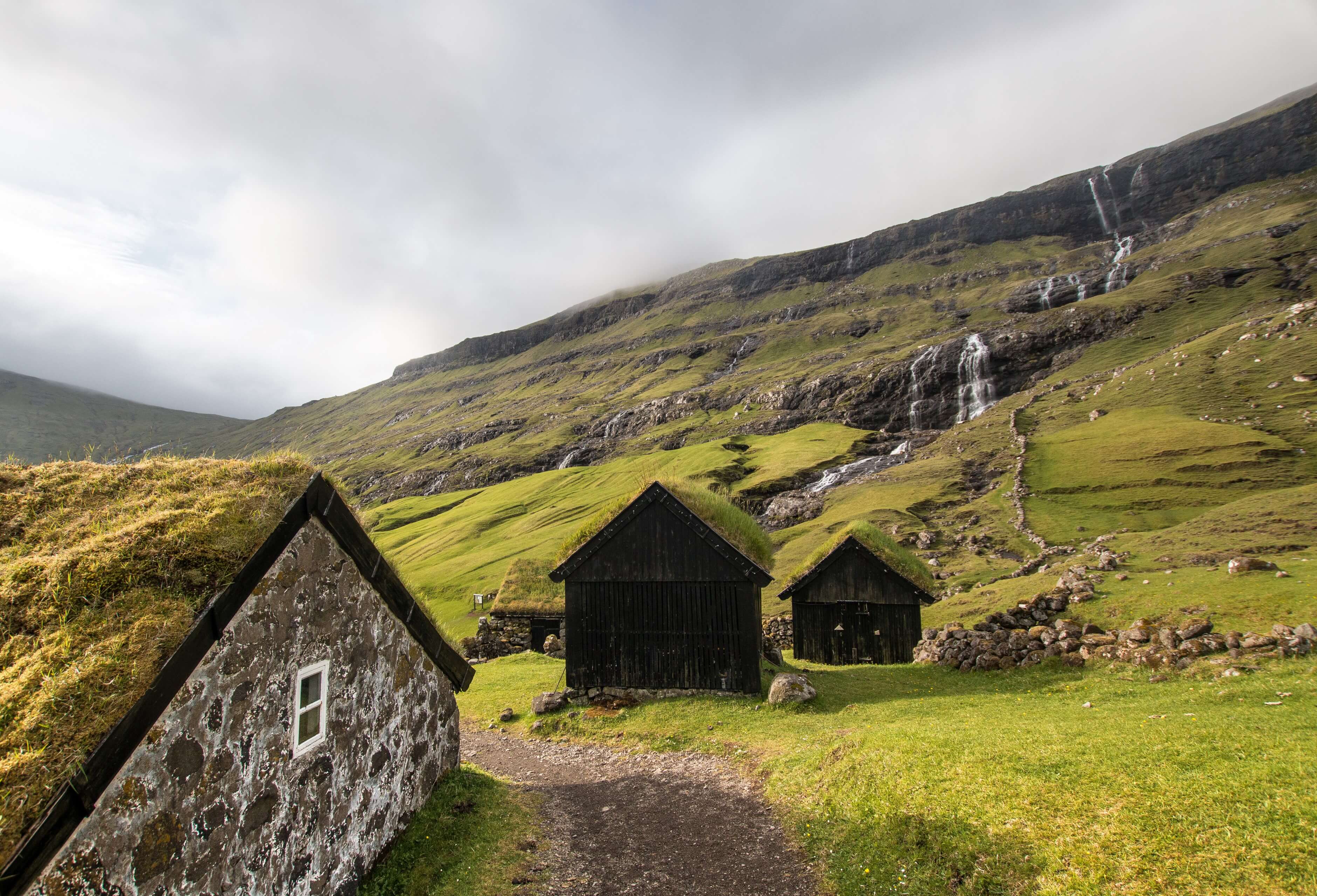 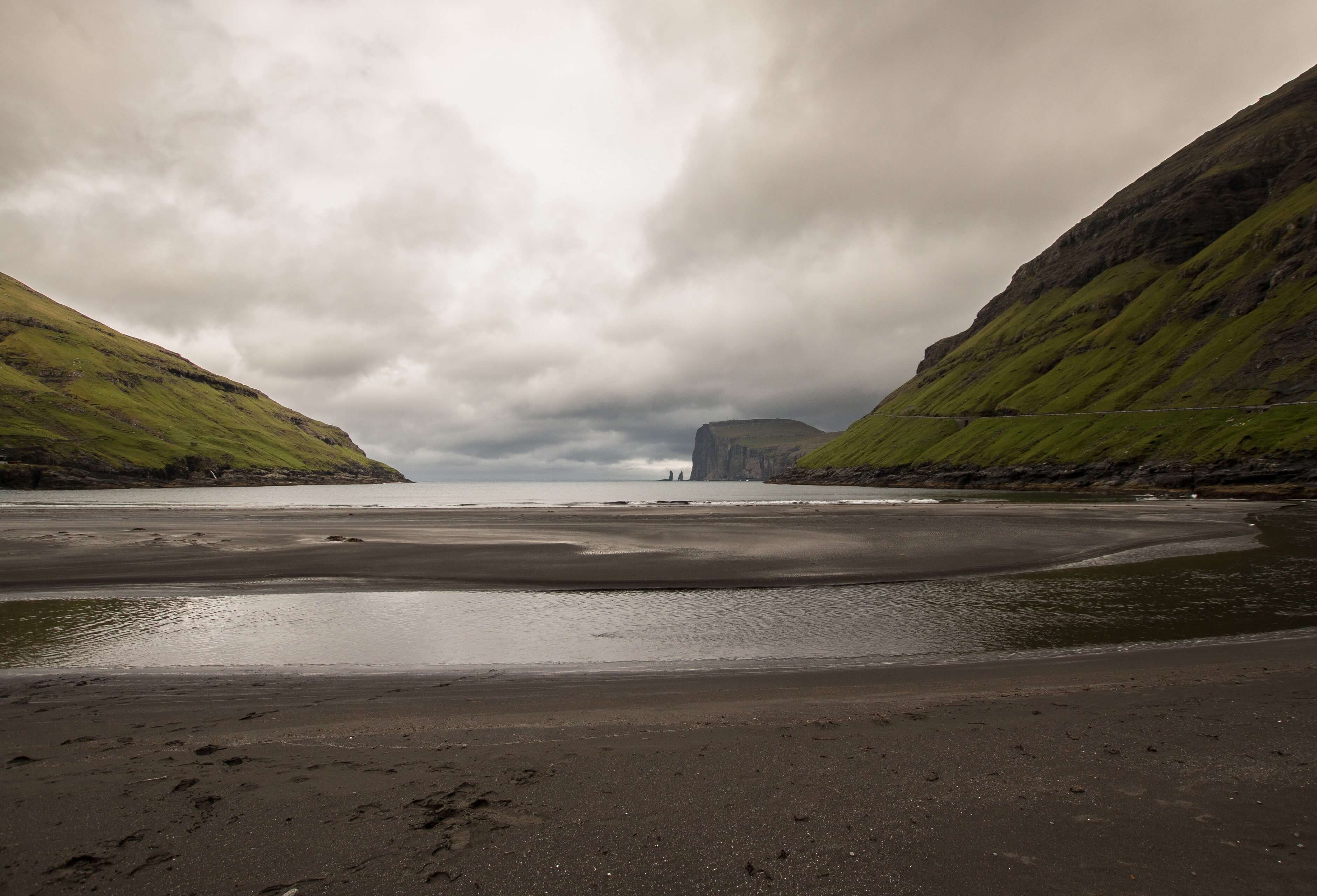 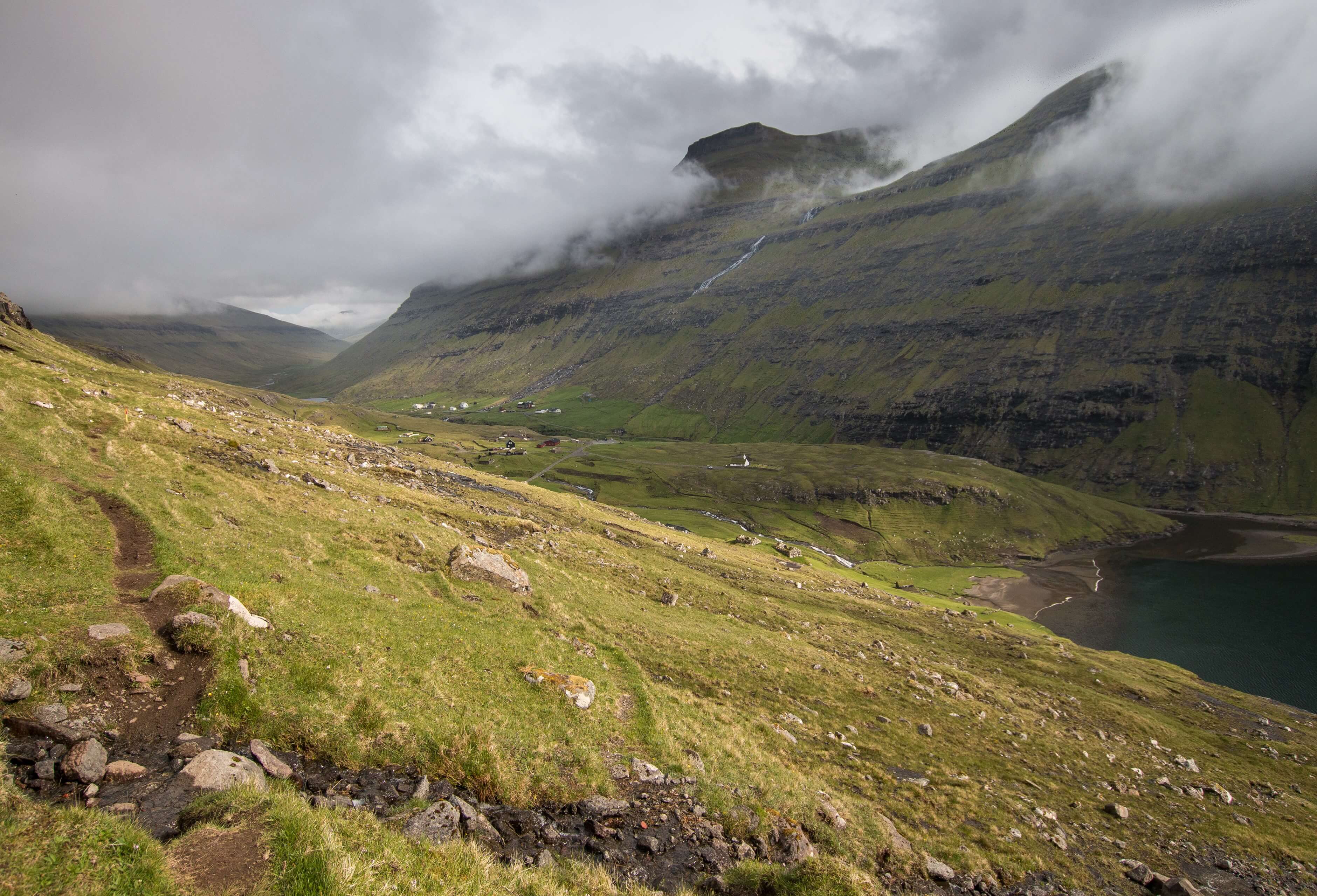 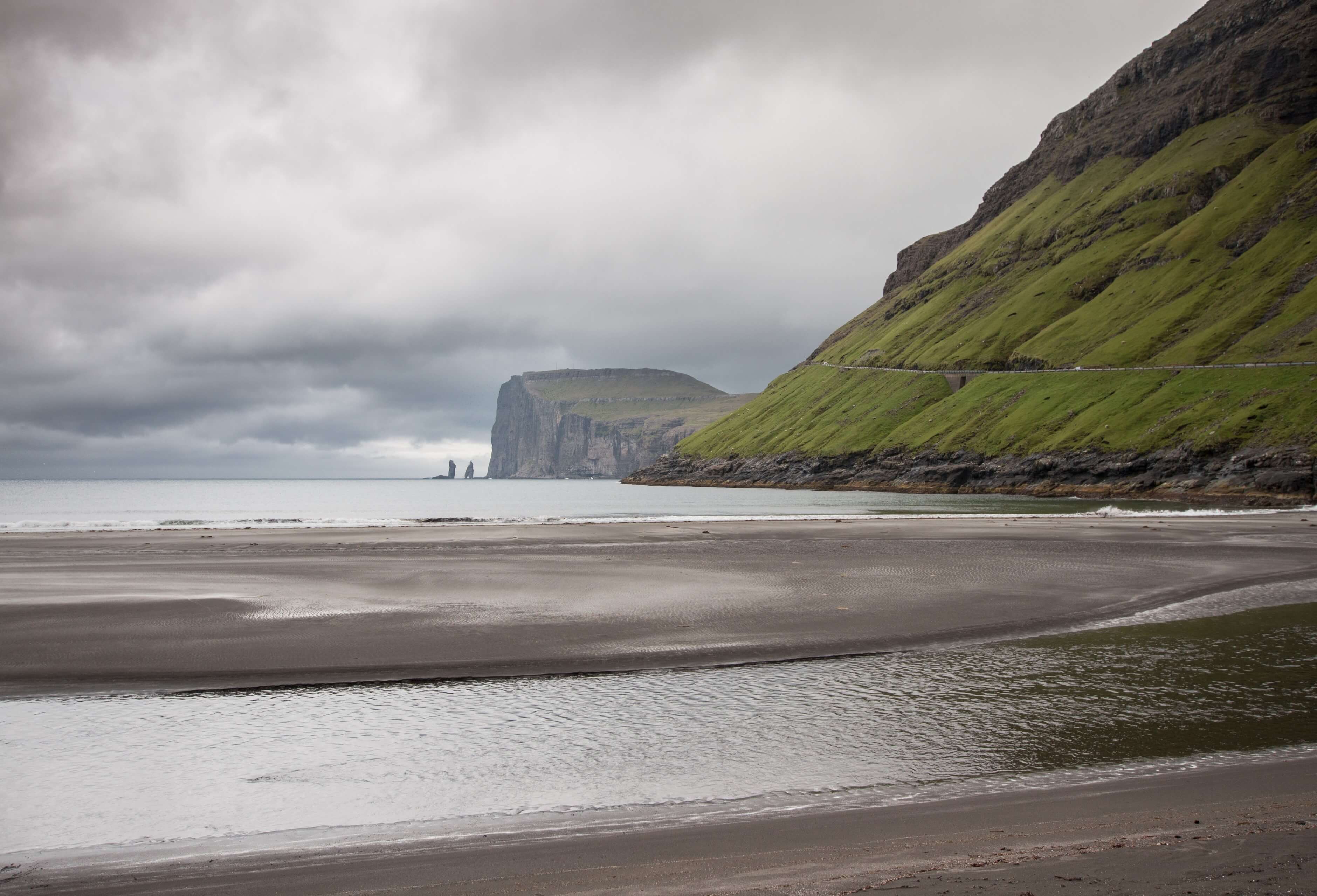 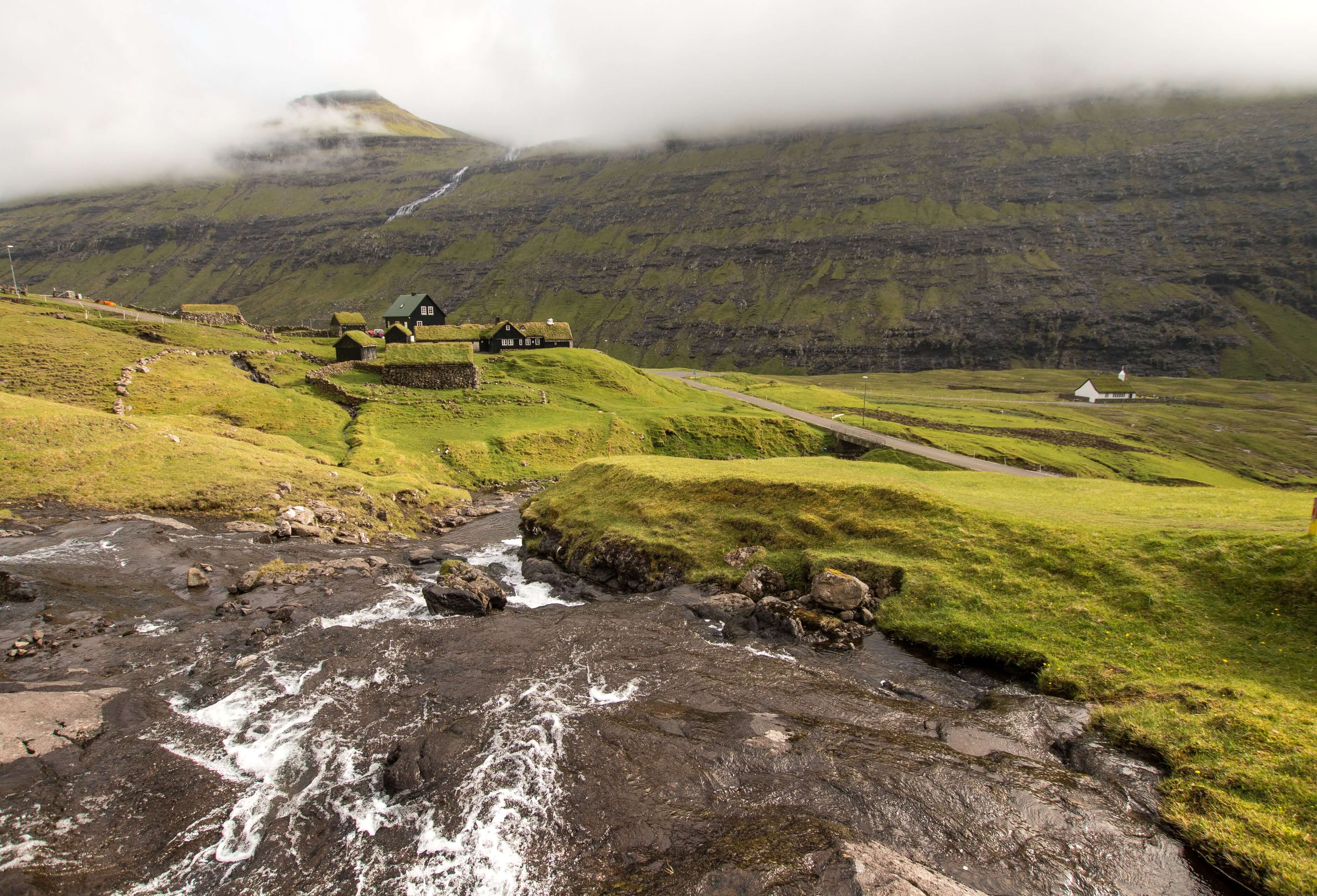 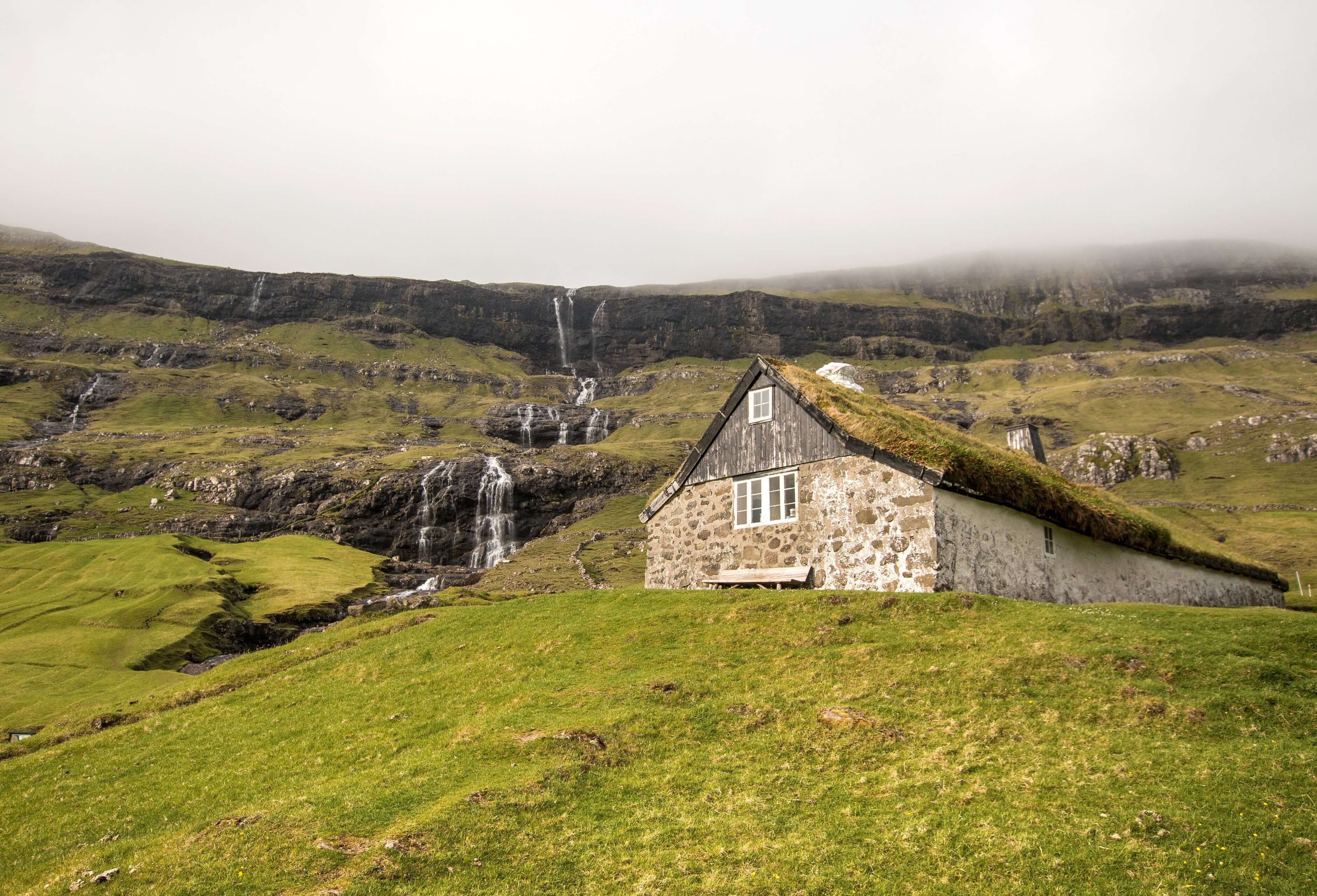 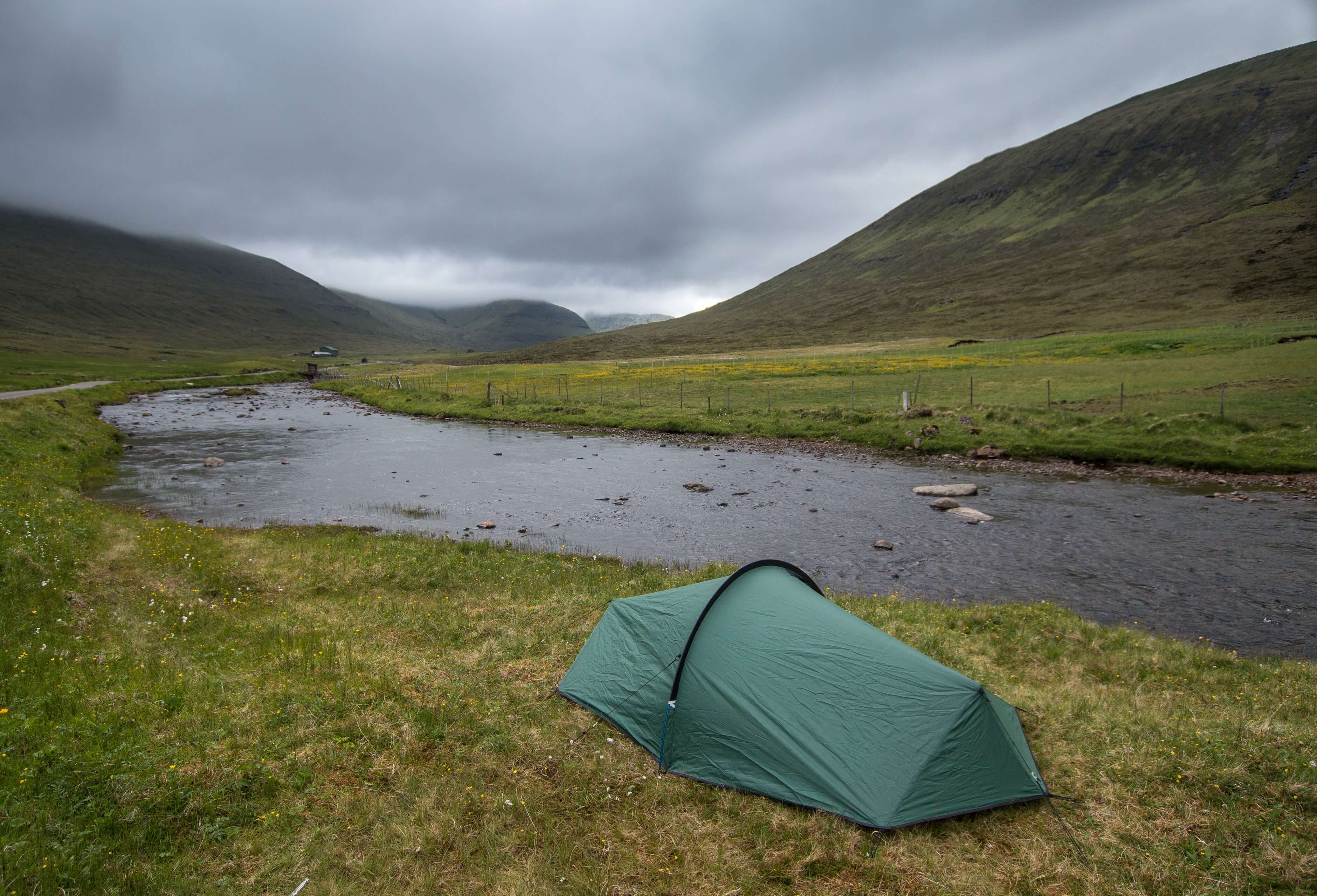 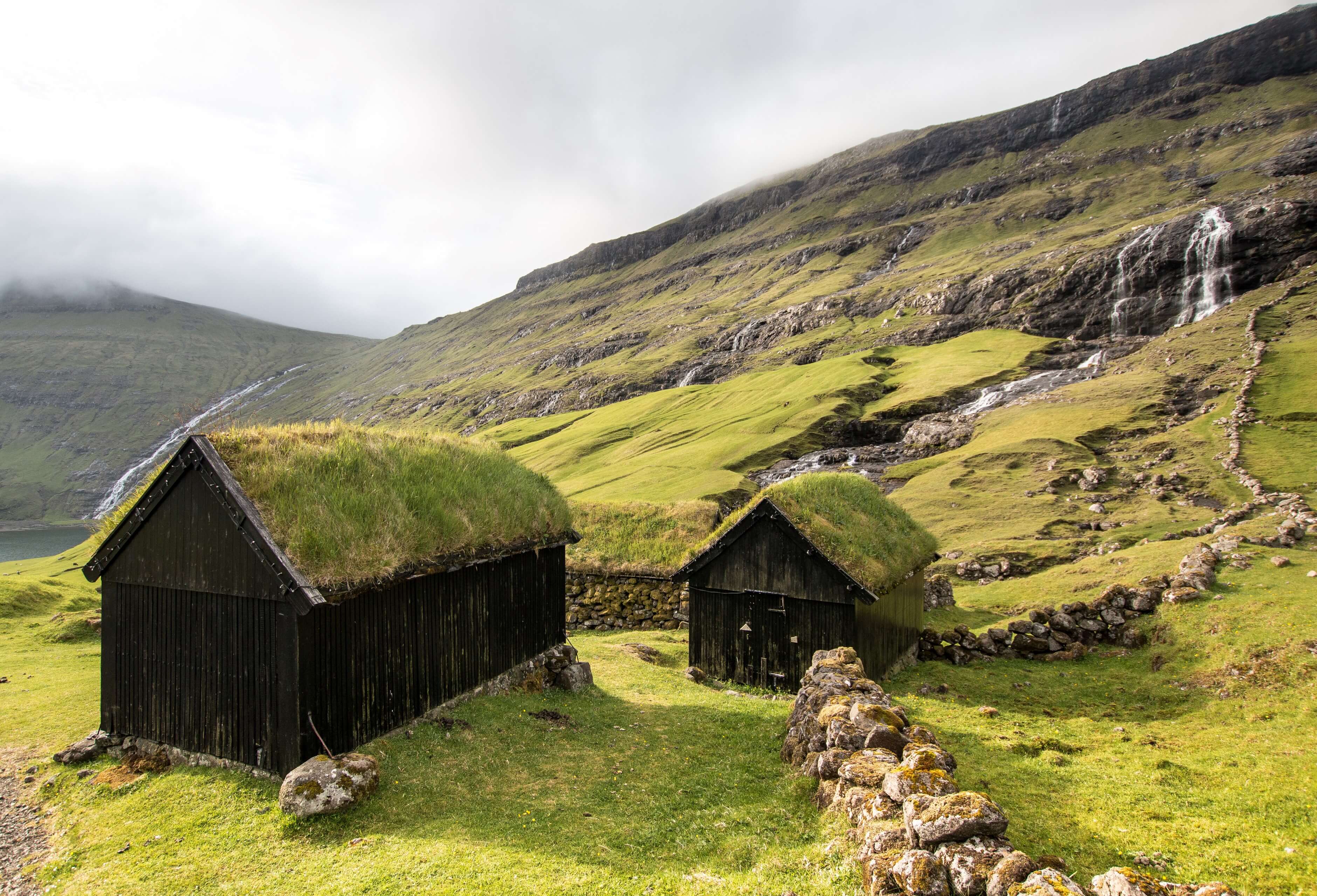 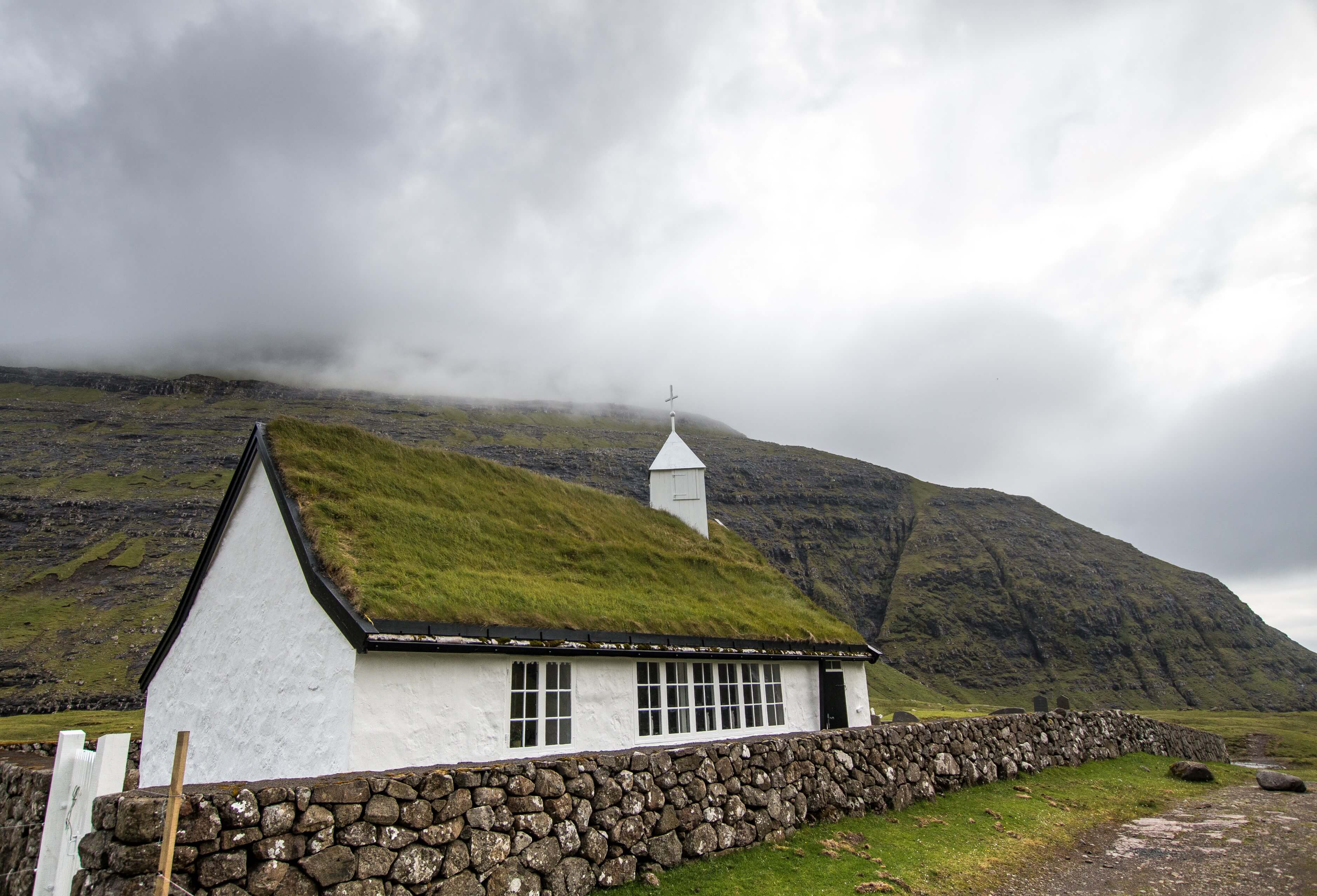 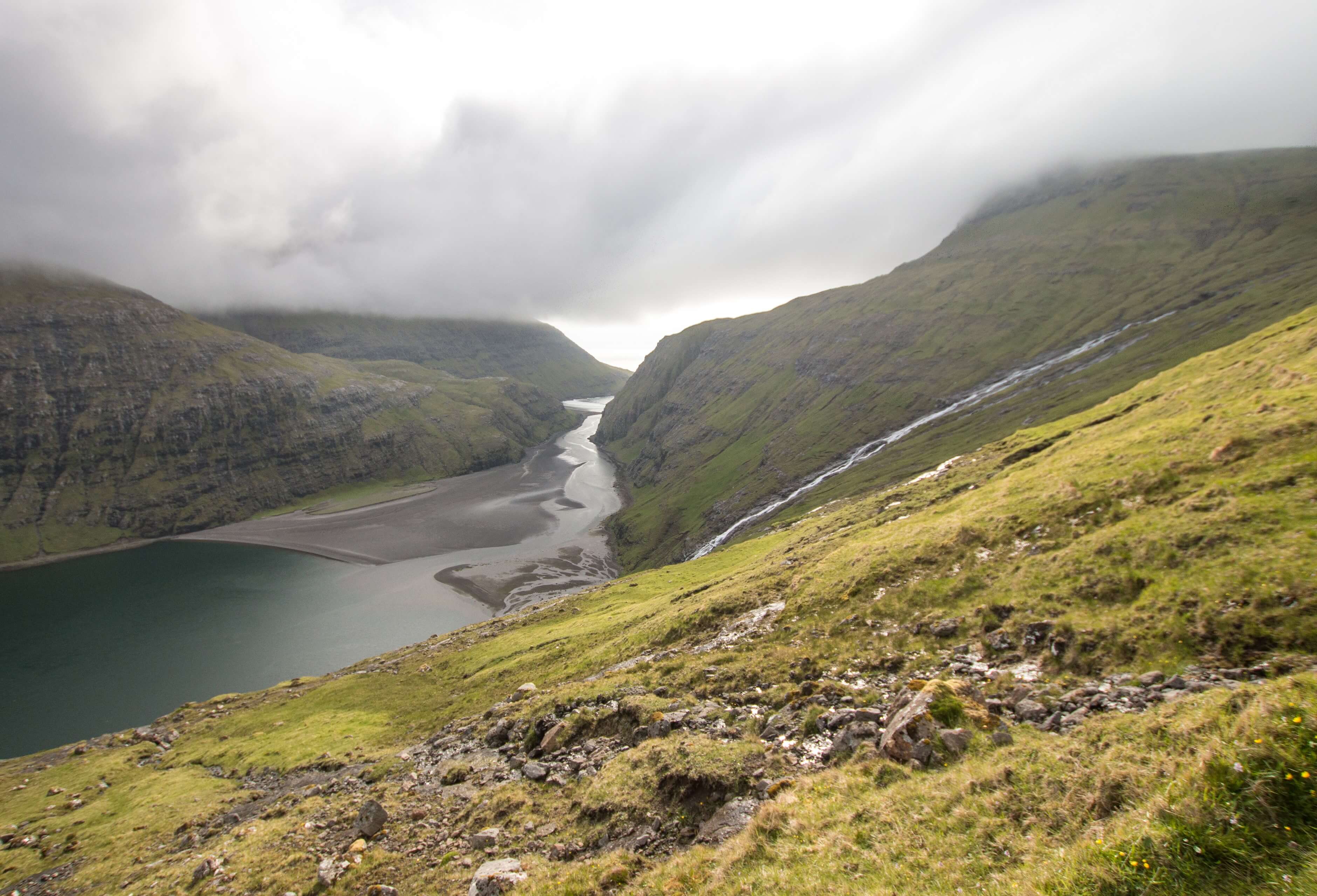 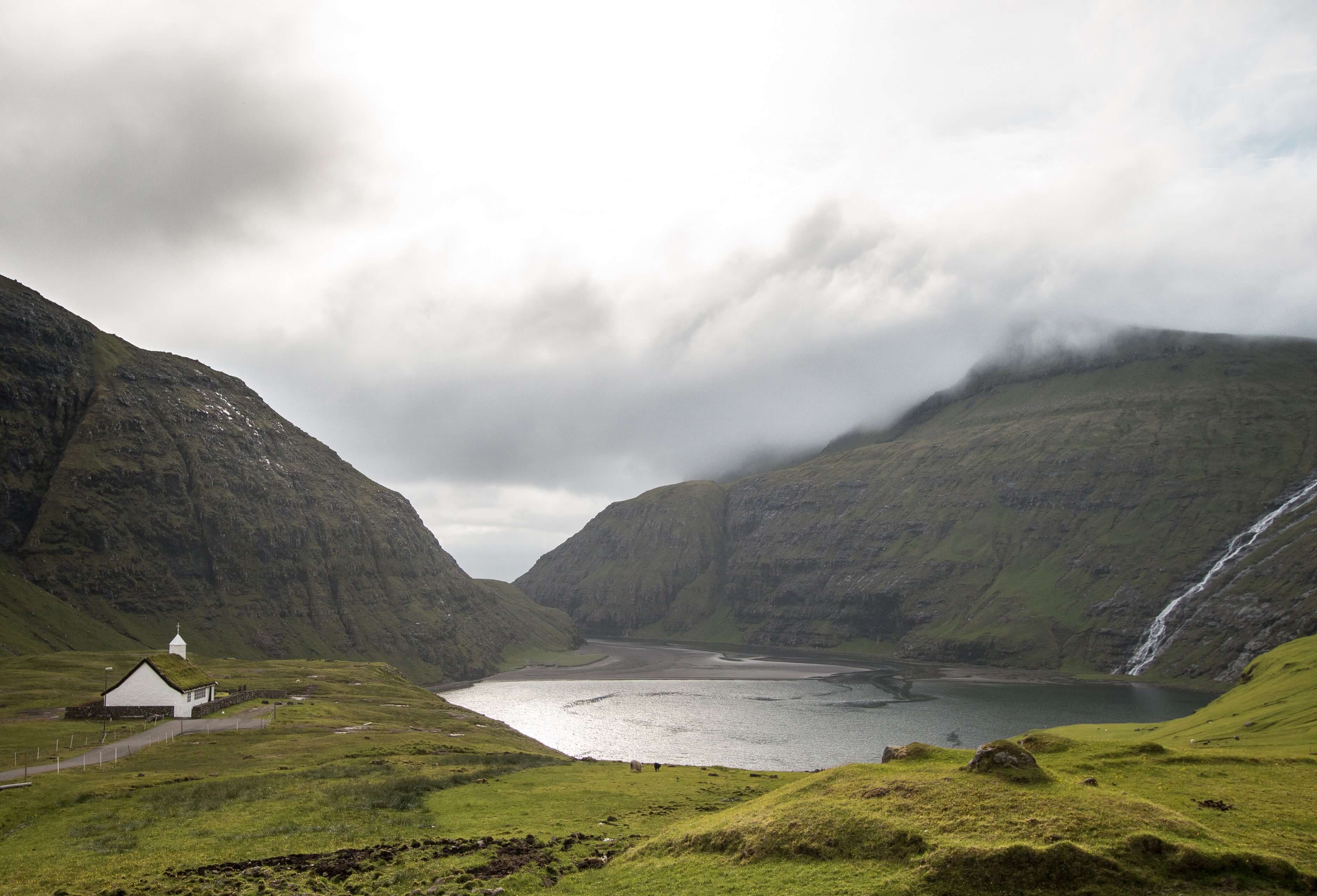 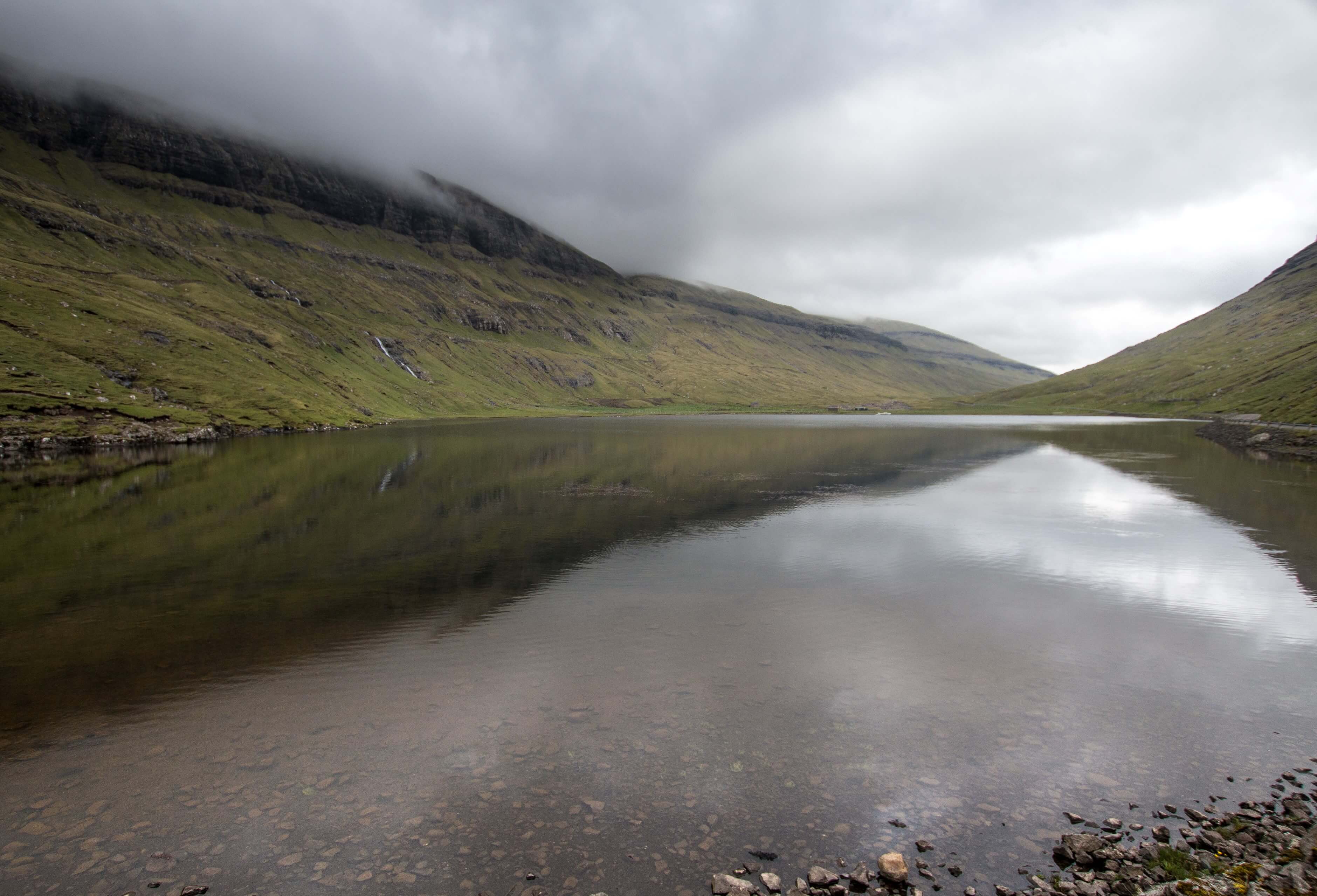 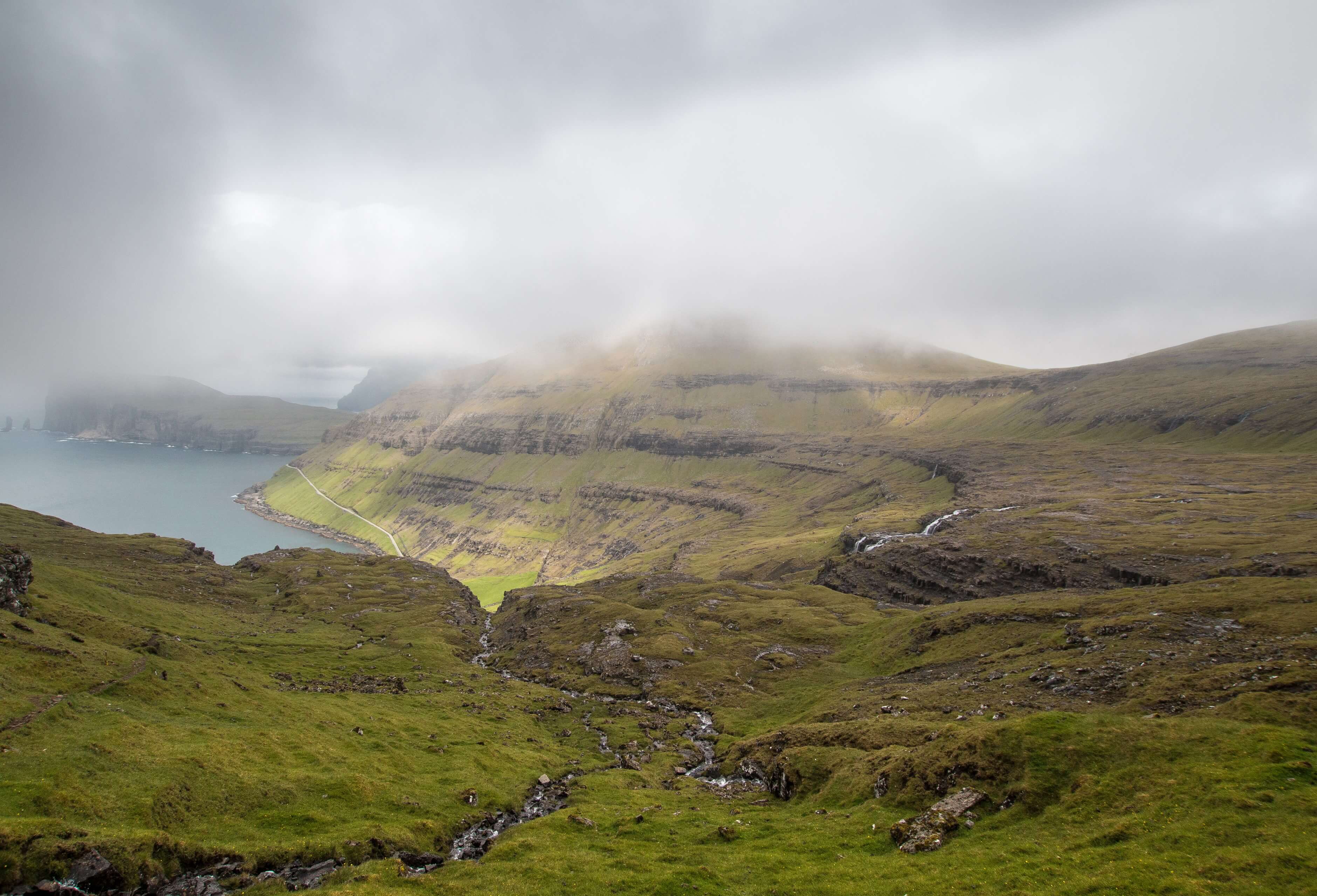 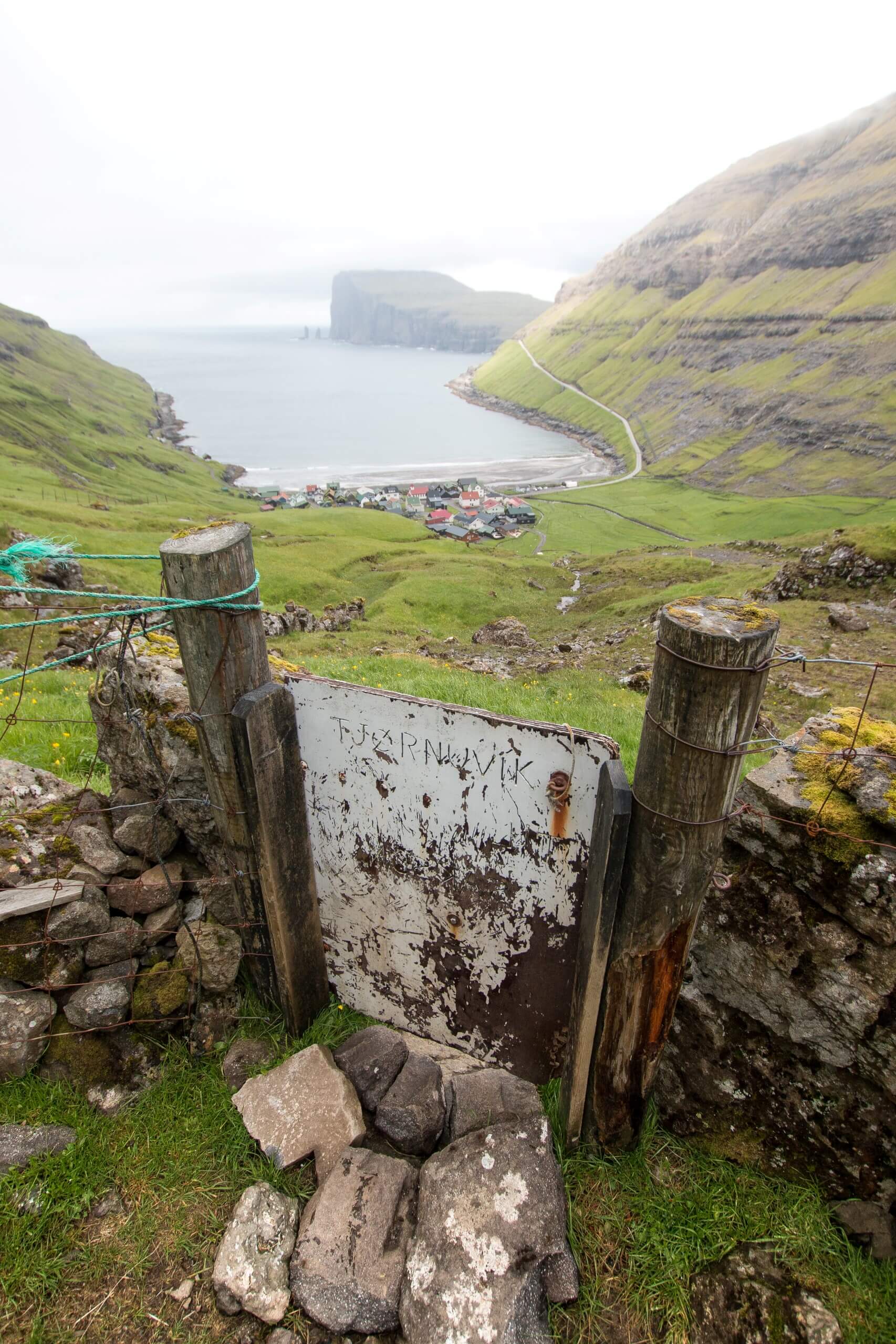 For a short 4 mile hike, this Faroe Islands adventure packs in some seriously fantastic views as well as the 2 scenic villages of Saksun and Tjornuvik. During my time on the Faroe Islands, I used the rather effective bus network that covers most of the villages on the islands. However access to Tjornuvik (where I started) is limited to a small infrequent mini bus from Oyrarbakki.  Saksun has zero bus networks so logistically it’s not the easiest hike to do if you don't have a car. Without a car be prepared for a bit of patience and some hitchhiking, or like myself, just do some wild camping instead!

I did not arrive at Tjornuvik until mid-afternoon due to the bus network but luckily in the summer you can hike most of the evening as it hardly gets dark at all! The small village of Tjornuvik is nestled into the base of the mountain side and is an impressive sight especially as you look back during the initial ascent of the trail. Even more impressive are the sea stacks of Risin and Kellingin across the water under the peak of Eidiskollur. According to legend, the giants of Iceland were envious and decided that they wanted the Faroe Islands for themselves. The giant and the witch (Risin and Kellingin) were sent to bring the Faroes to Iceland. Their efforts were unsuccessful as the witch tried to push the mountain onto the giants back. They lingered too long and when the sun broke at dawn they both turned to stone and have stood there ever since!

Bring some money on your visit as you will likely have a warm welcome from one of the locals (I think it’s a local person) selling coffee and fresh pancakes, perfect preparation for your journey up across the mountain pass. It was pretty miserable weather on my arrival. As I was enjoying my coffee a big group of hikers finished their descent from the pass having done the hike the other way from Saksun. They were wet, seriously wet and looking rather worse for wear having recounted their story of the hike taking many hours and being extremely challenging.

I must admit some nerves kicked in as I was going up alone. Luckily my trip over was just misty and overcast with no rain. I personally thought the route to be pretty simple path so I’m not sure how they had such a horrid time of it!?

The first section of the hike is a fairly steep affair as you ascend immediately up from the village. The route is a mountain pass that winds between the peaks of Melin (764m) and Heyggjurin Mikli (692m) The highest section of the pass is around 500m, reached approx half way during the hike. Its 500m up and then 500m down! Once out of sight of Tjornuvik the terrain and landscape becomes typically Faroese wilderness. For me, there are few places in the world make you feel so isolated, remote and alone as the Faroe Islands. It’s a magical place that feels at the edge of the world. The misty conditions also made for an incredibly atmospheric hike especially walking next to the small river flowing down the mountainside with all the green rocky terrain disappearing into the mist.

Once up to the highest part of the pass it’s the descent down to Saksun. Saksun is a popular place for locals and tourists as it’s like a natural amphitheatre, surrounded by 3 sides of mountainside and the tidal lagoon of Pollurin on its Western side base. It looks amazing from high above as you come down the pass, especially for me as the sun was starting to stream through the clouds. Unfortunately it is known that many tourists do disrespect some of the land around Saksun and frequently trespass into private property to just to get the photos. Please if your do go there, don't be one of those people!! The locals care little for your Instagram shots and would prefer you respect their village.

I did attempt a bit of drone flying high up as I started descending (not anywhere near the village) however it was brief as it was fairly windy up high and as normal in the Faroe Islands, as soon as I got the drone up it would get swarmed by the local bird anti drone enforcement patrol. (Literally swarmed by birds)

Once down into Saksun there are plenty of cool buildings and church you can walk around as well as a potential walk around the lagoon which also goes round to the open sea. There is also Duvugardar museum which gives a snapshot of farm life from the middle ages to the present. I arrived too late to check it out unfortunately.

As stated, there is no public transport that serves Saksun so one option (if you're a hard core hiker) is to head back over the mountain pass back to Tjornuvik, or there are plenty of opportunities to hitchhike. The nearest village that is served by bus is Hvalvik which is at the end of the long windy road that serves Saksun. It’s about a 6.5 miles between the 2 villages. My plan was to wild camp for the night so instead of intruding in Saksun, I walked halfway down this road (a nice relaxing mid evening walk) and found a nice spot by the river Stora to pitch up the tent. If you think about doing something similar, beware of the midges! Also if you do wild camp it stays light pretty much all night in the middle of summer. I found it very weird to try and sleep! The following morning I walked the rest of the way to Hvalvik and popped on the bus on my way to the next epic Faroe Islands adventure!

Please feel free to ask any questions if you're thinking of walking this wonderful trail! I would be glad to offer any advice.