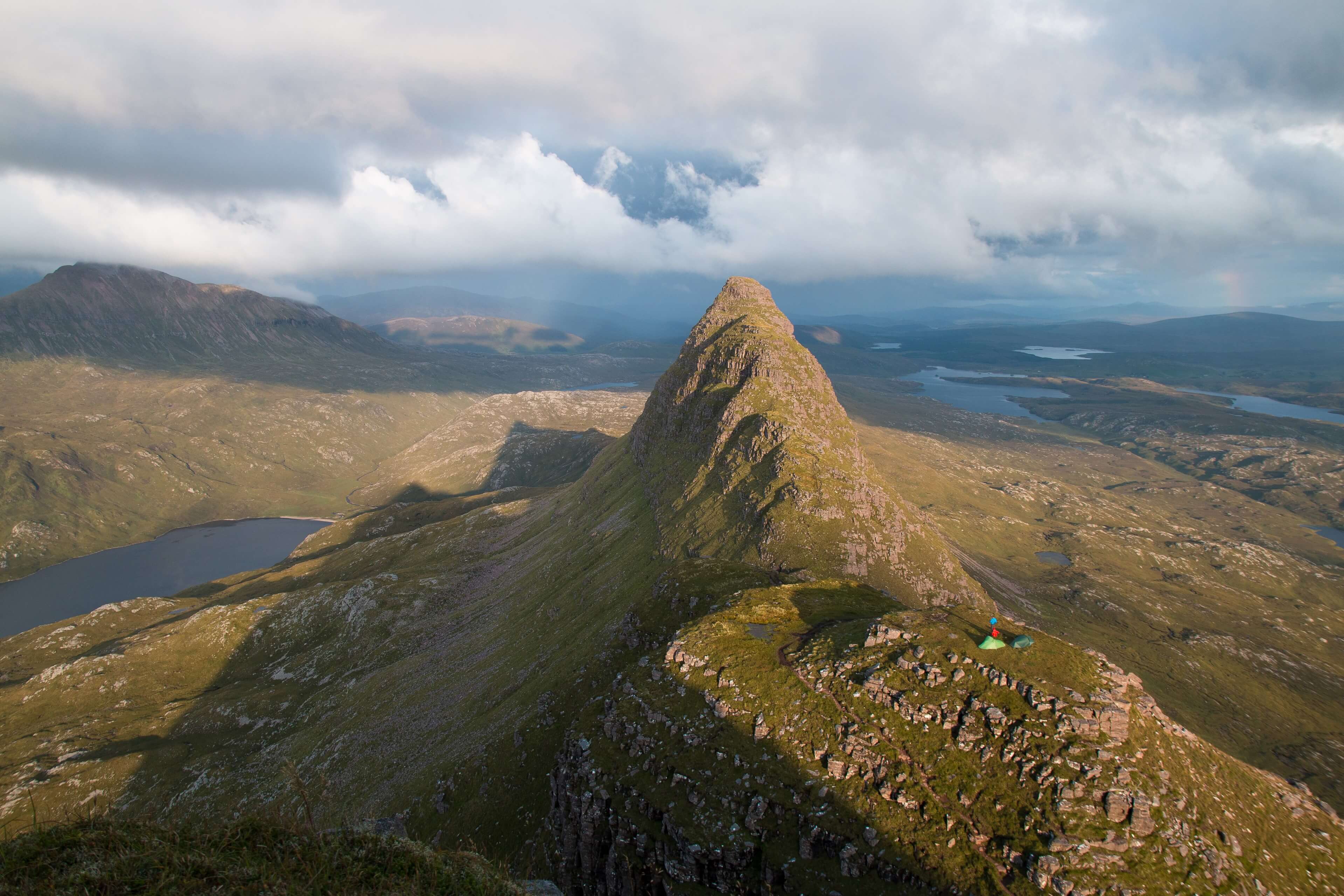 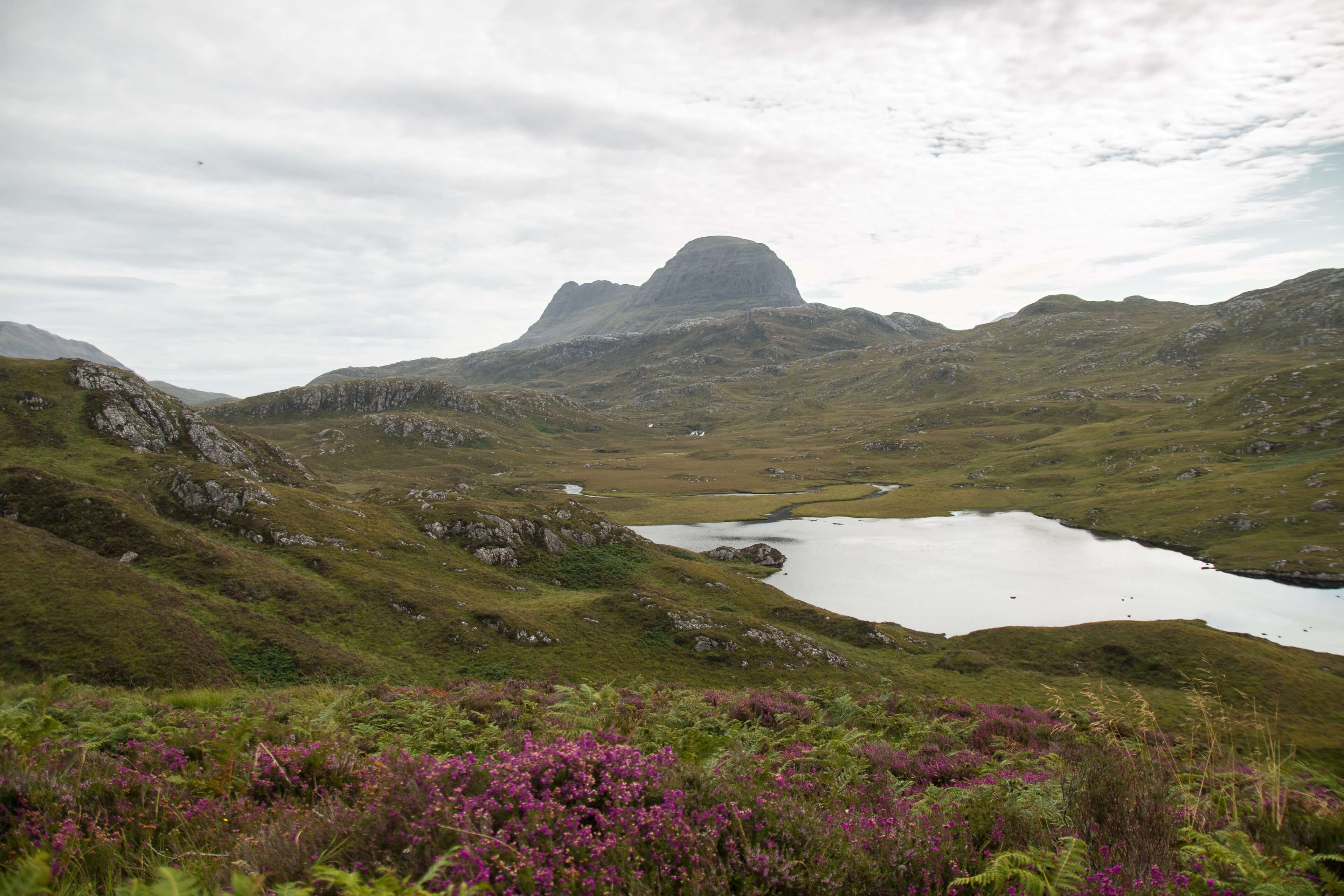 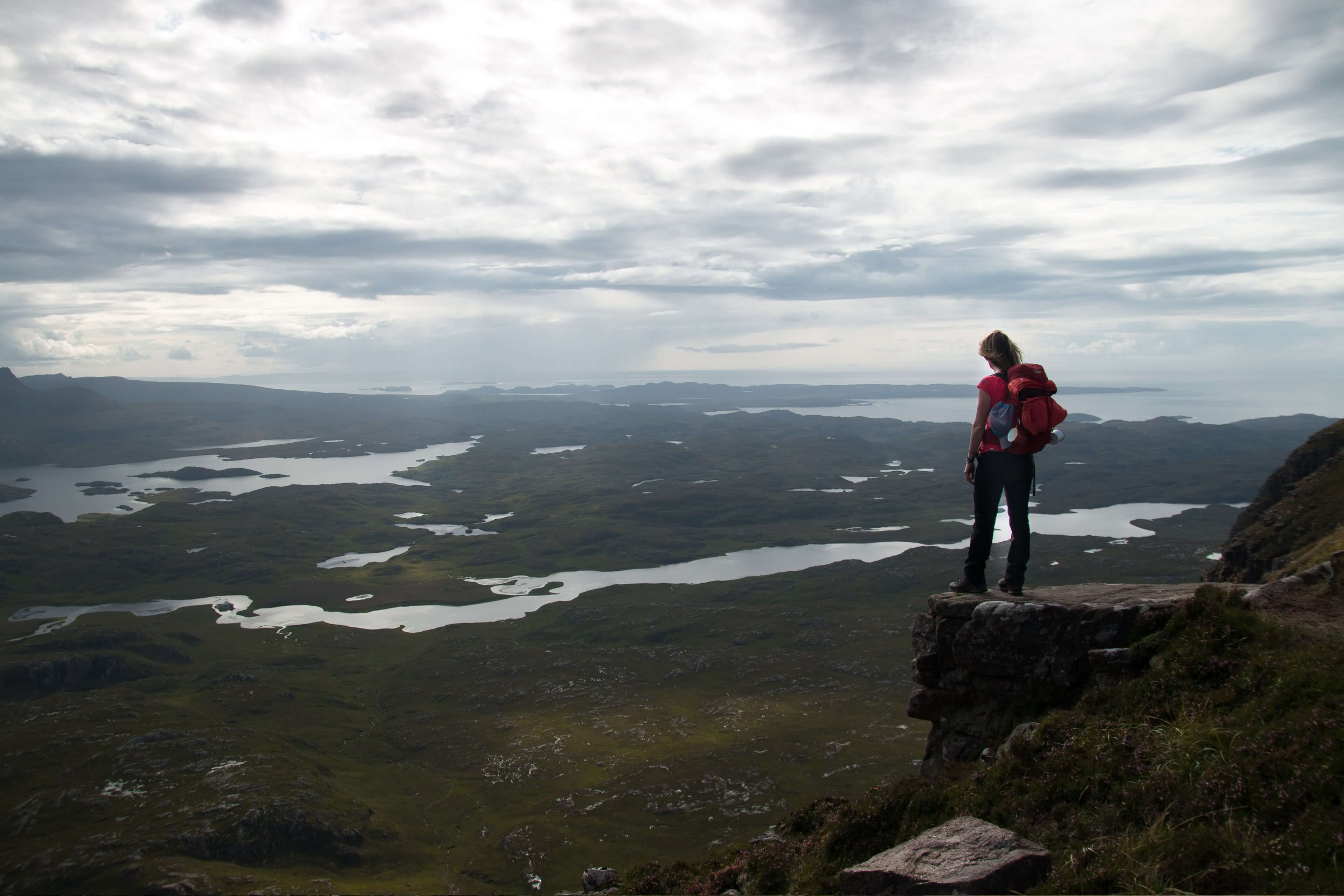 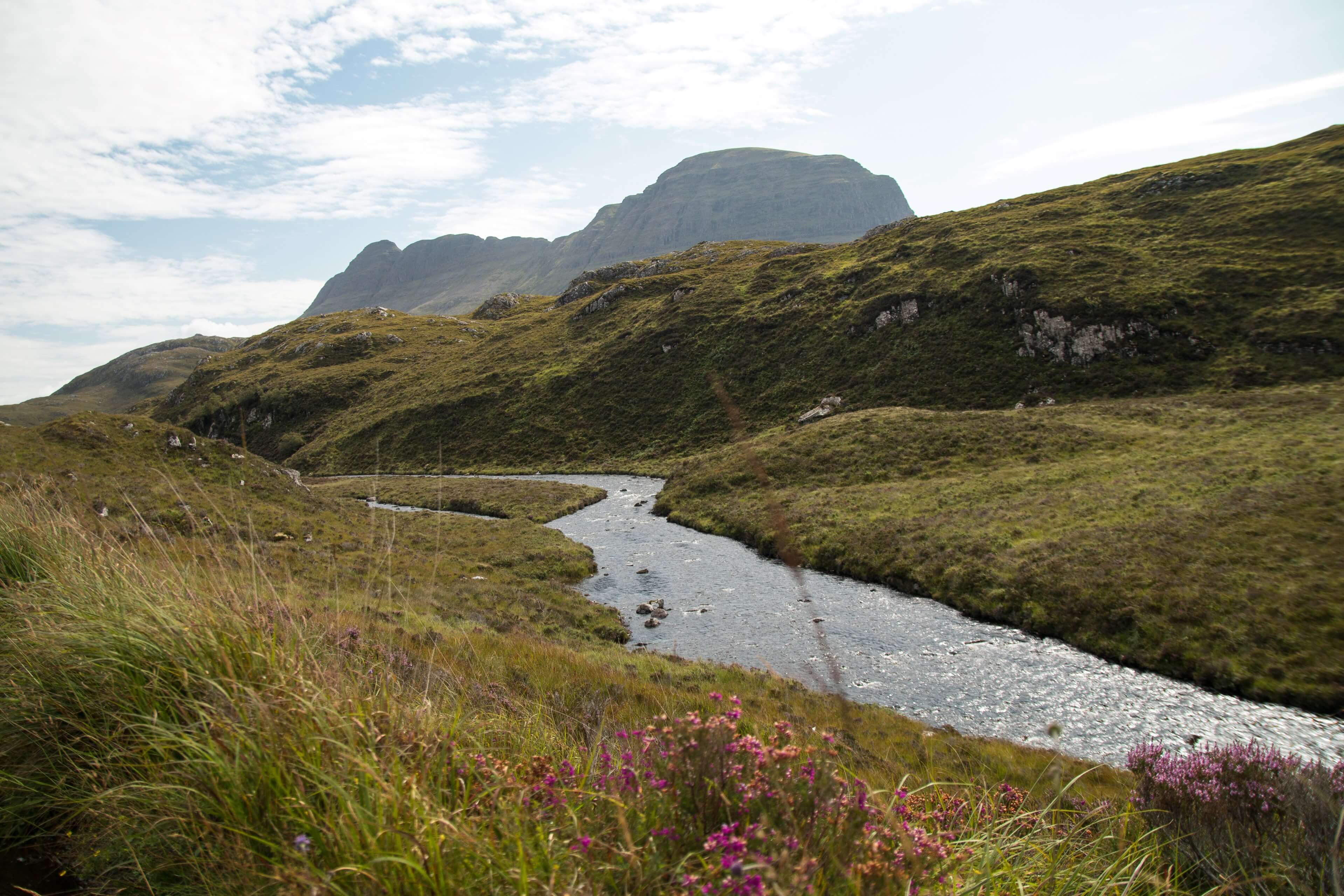 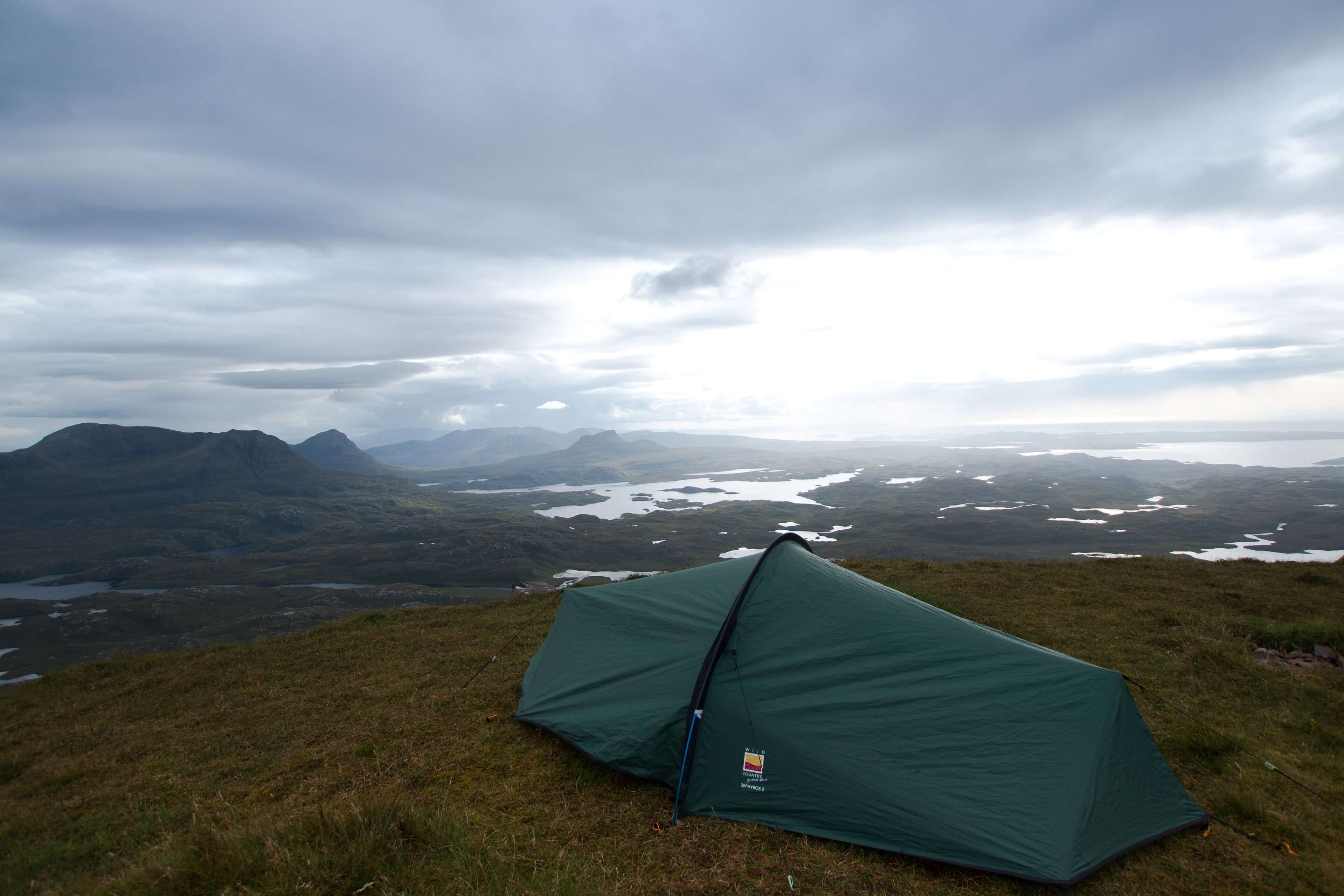 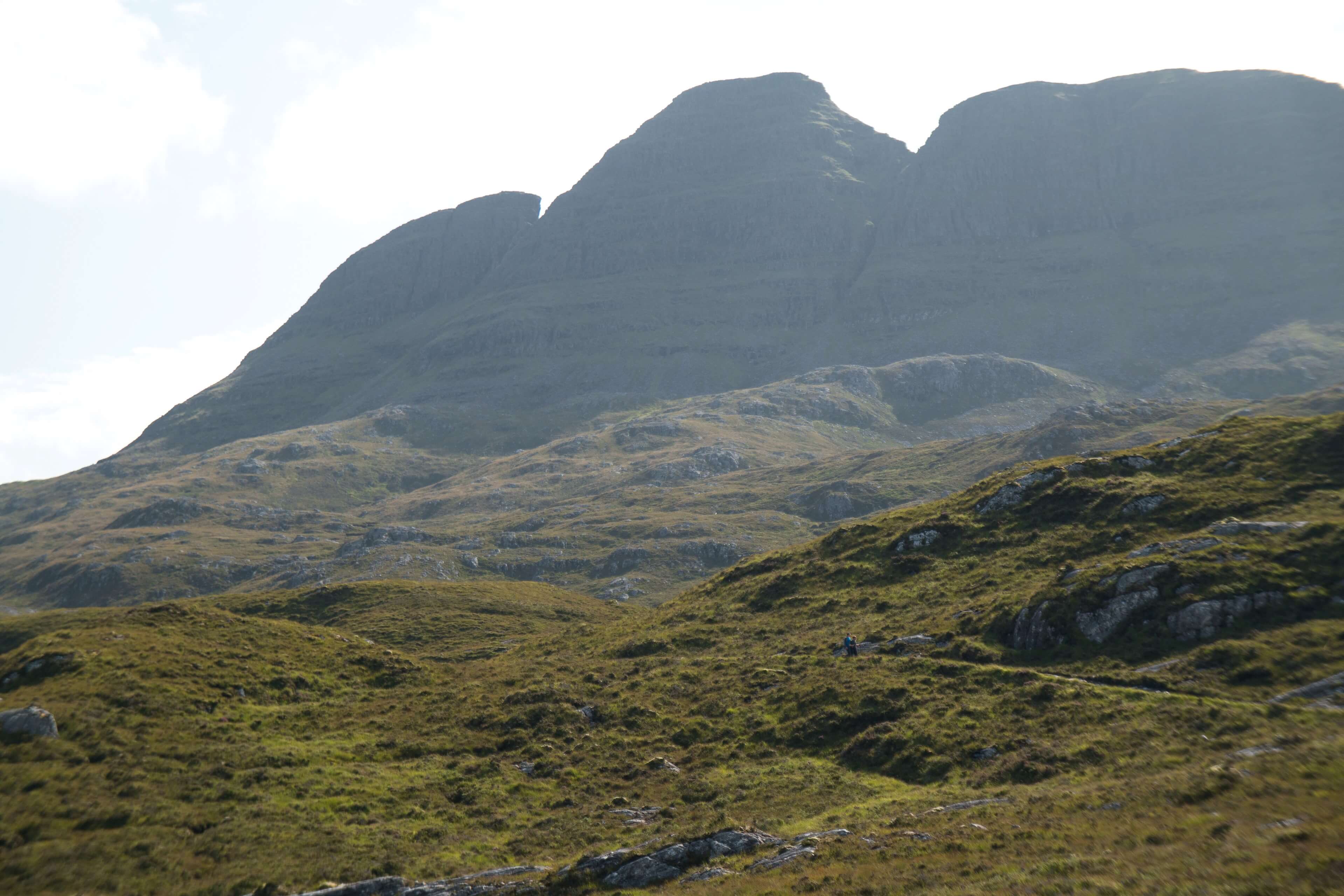 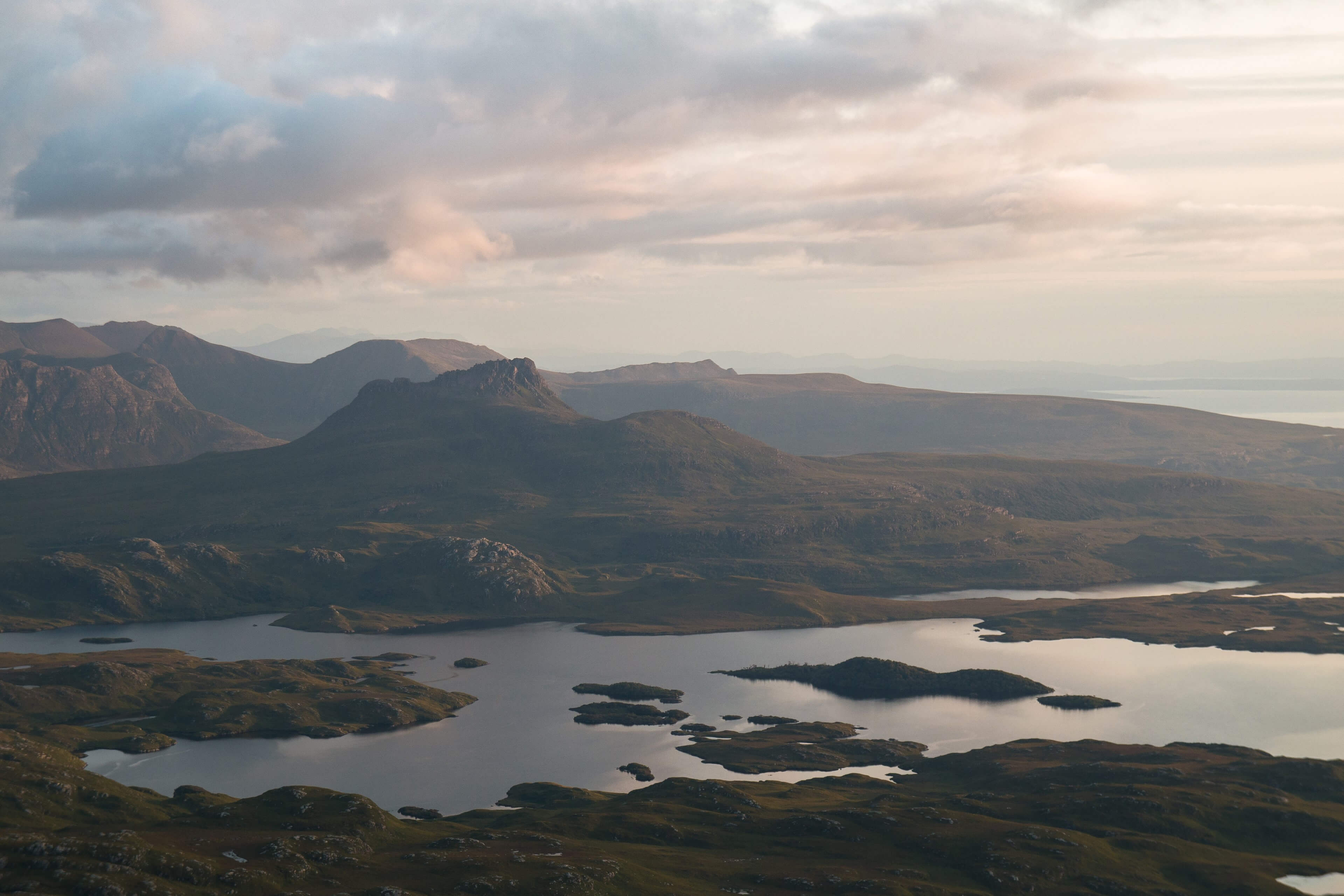 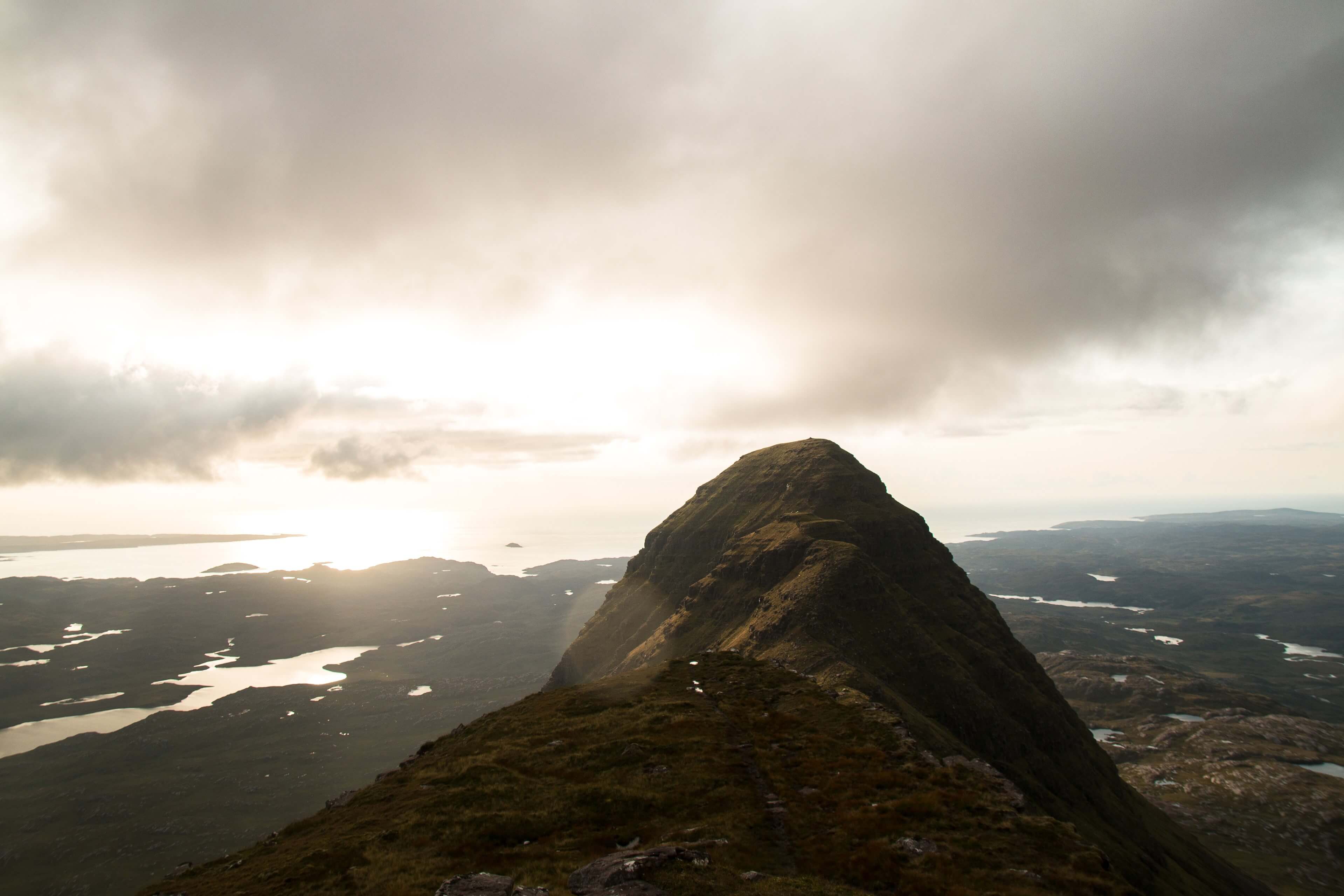 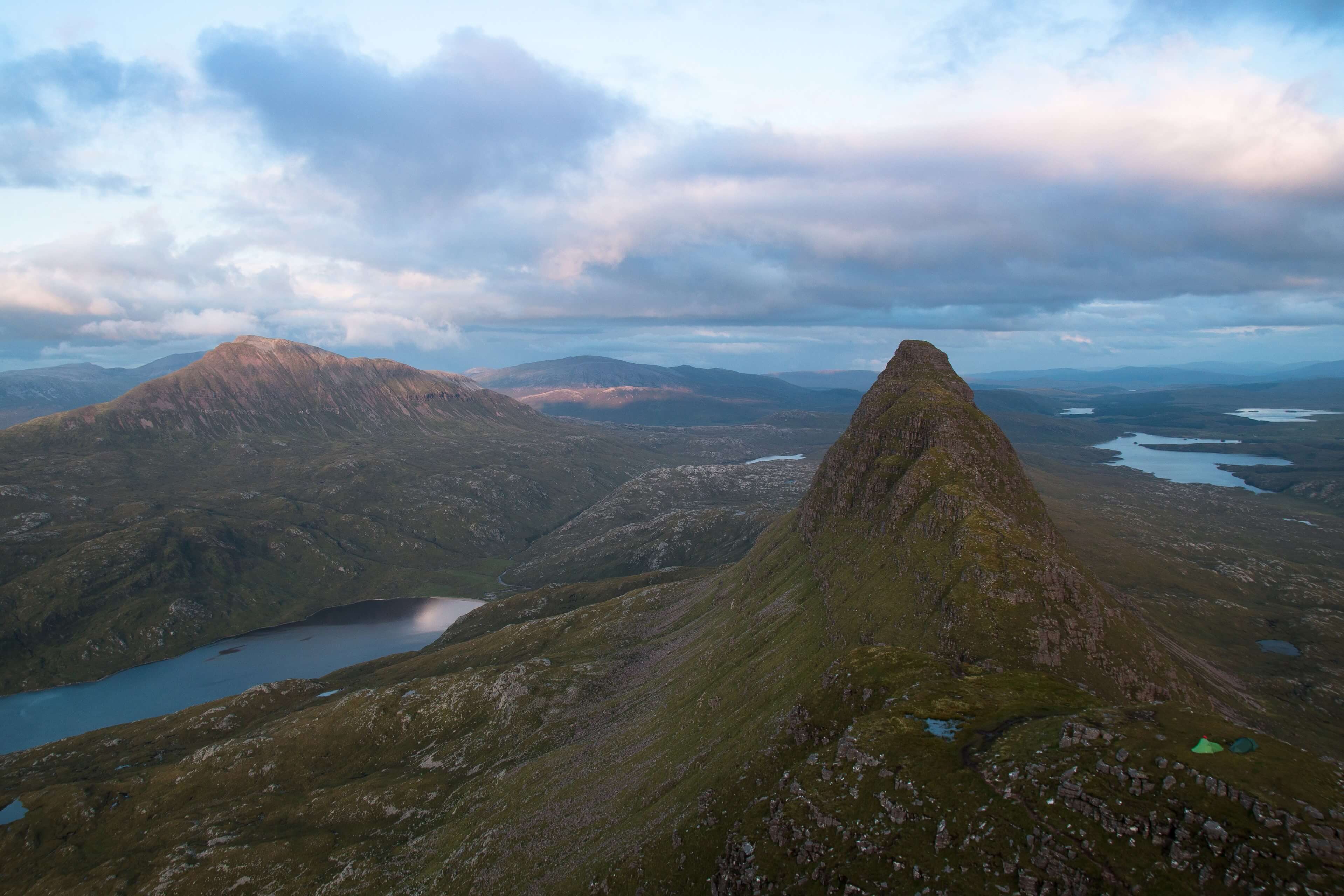 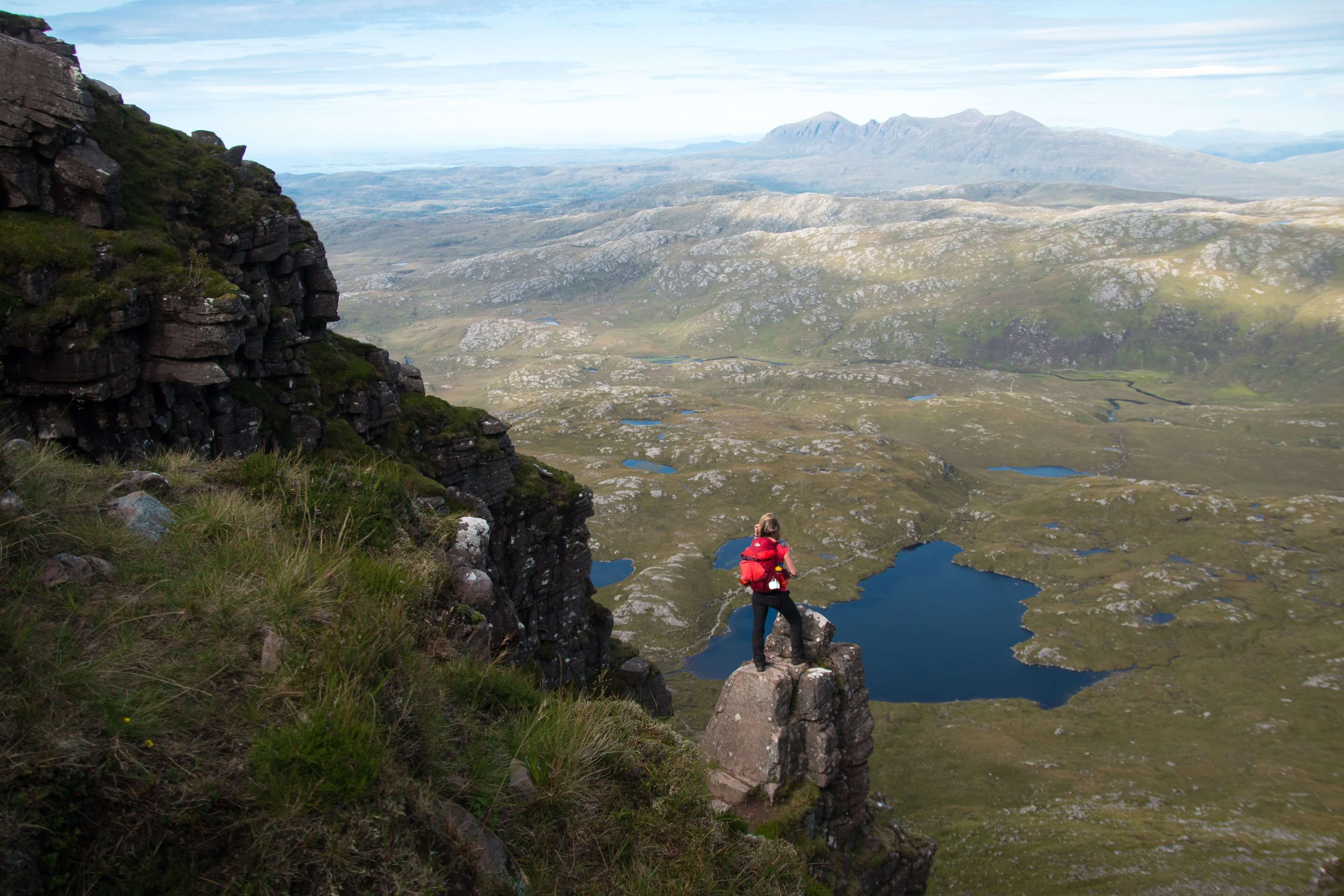 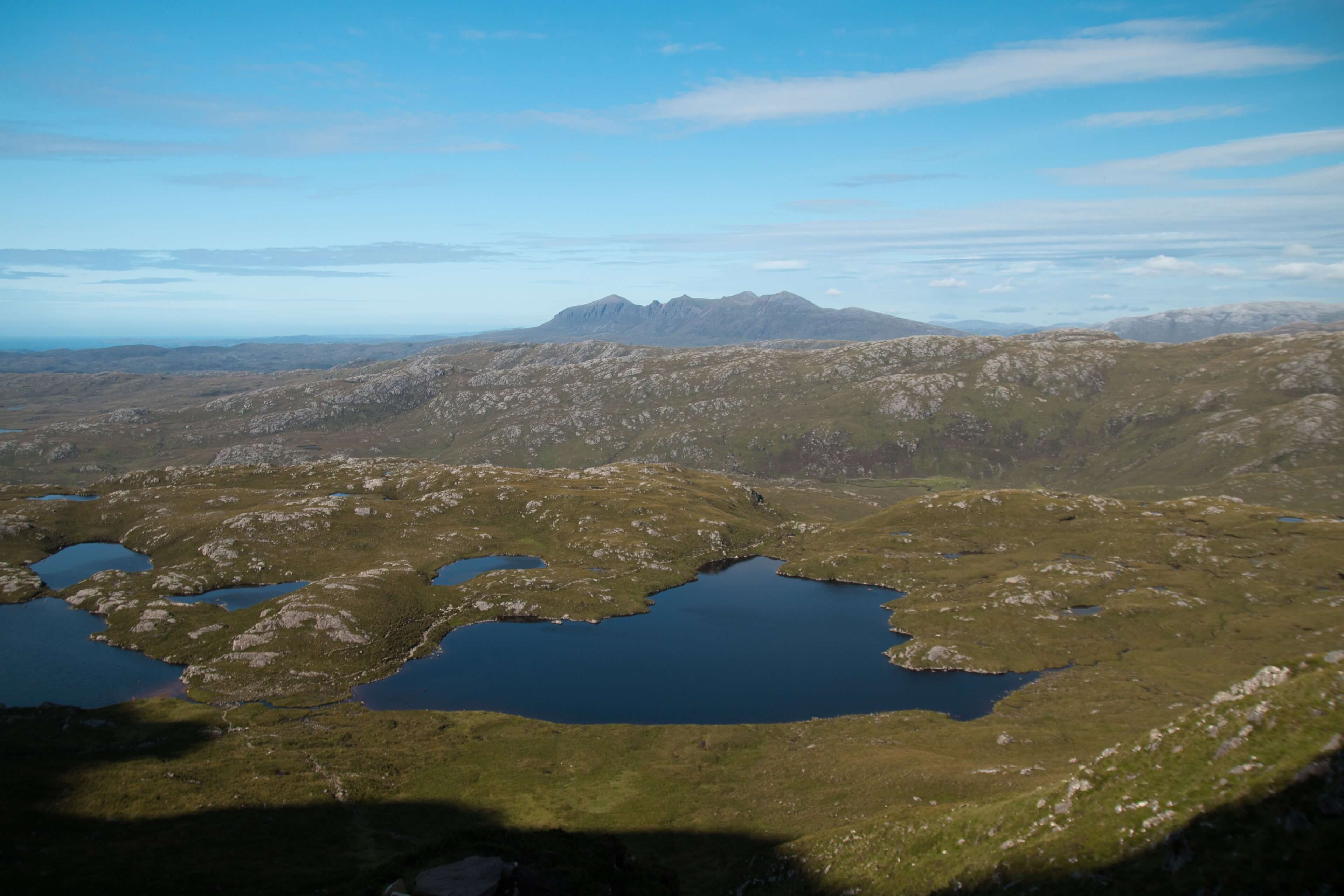 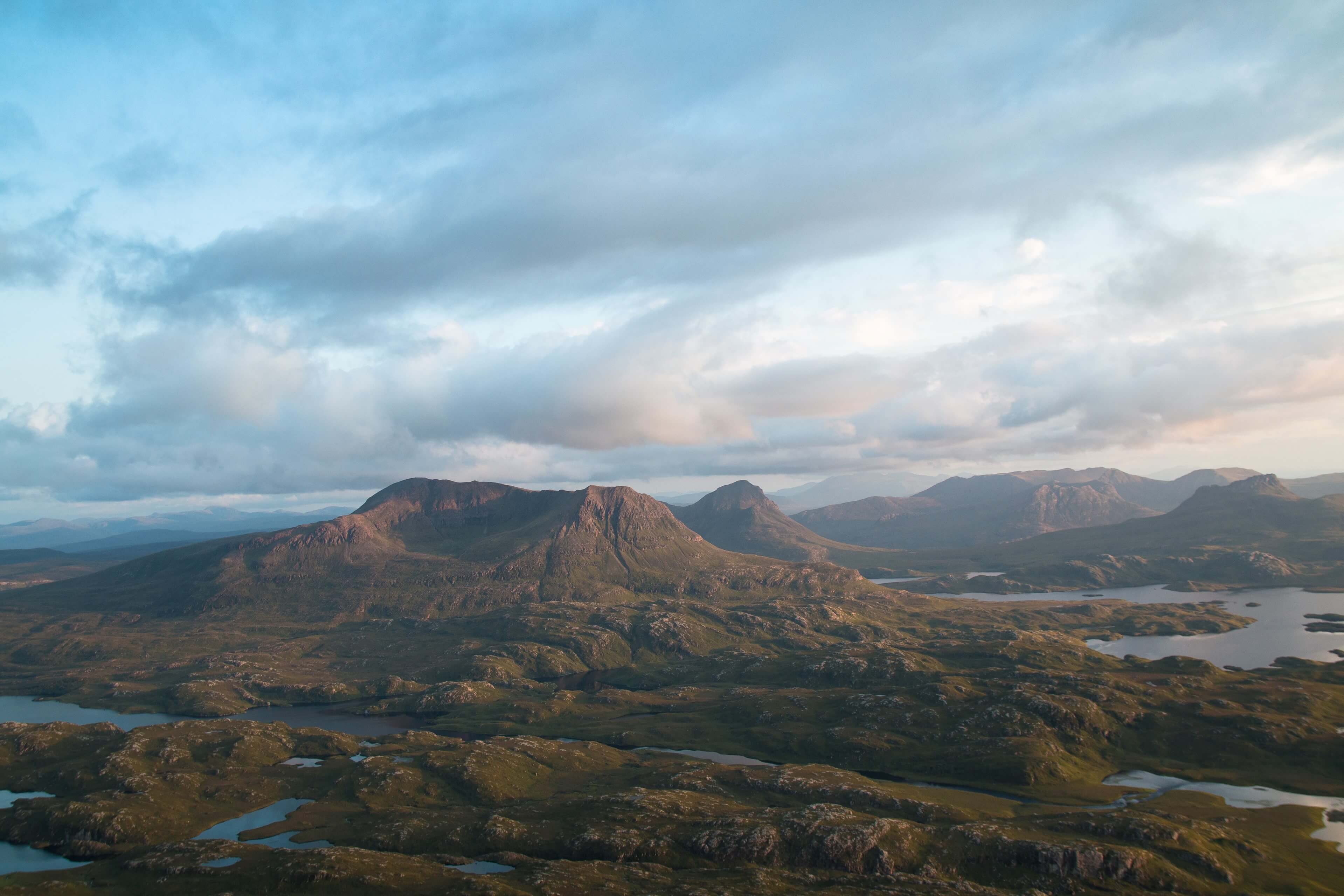 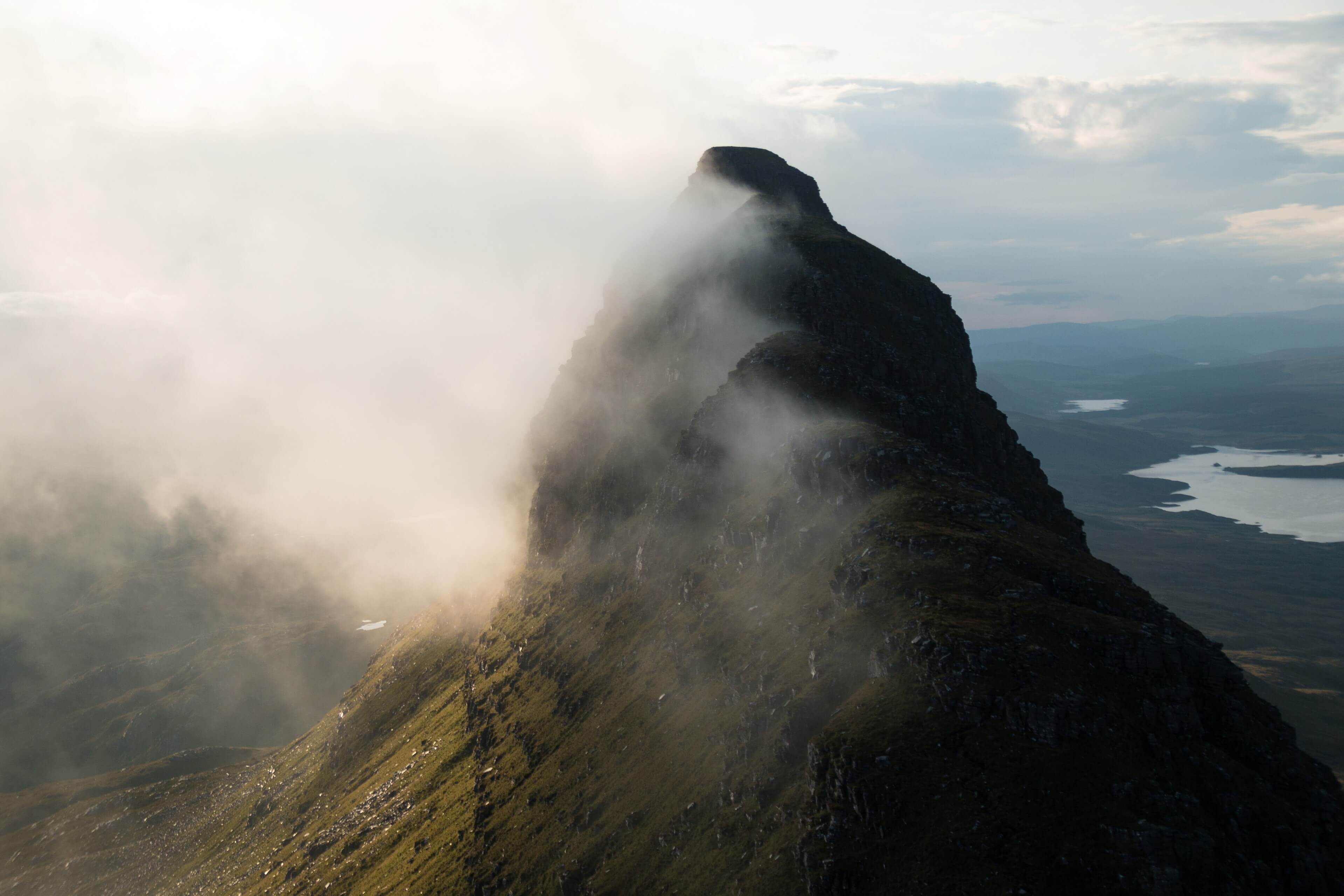 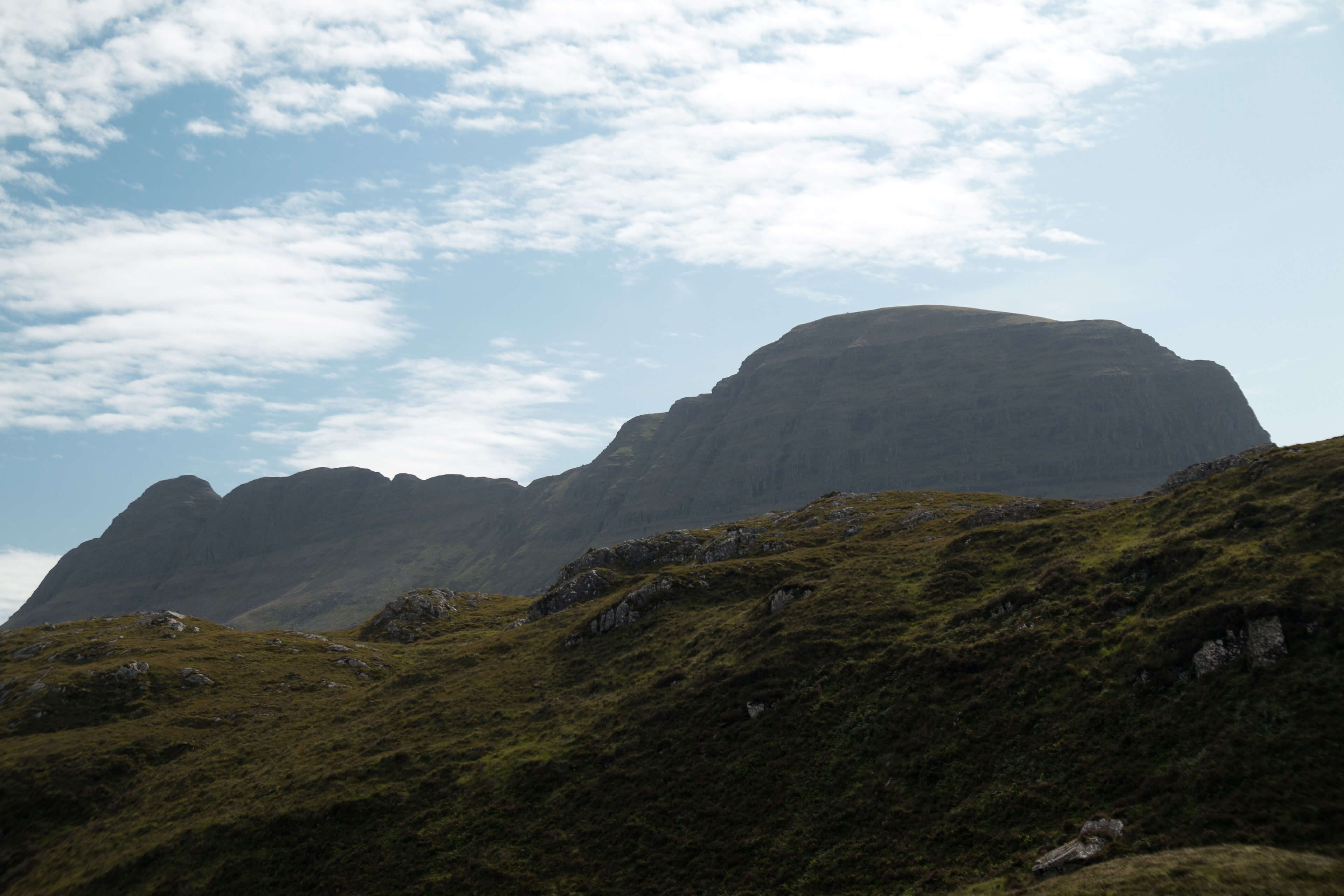 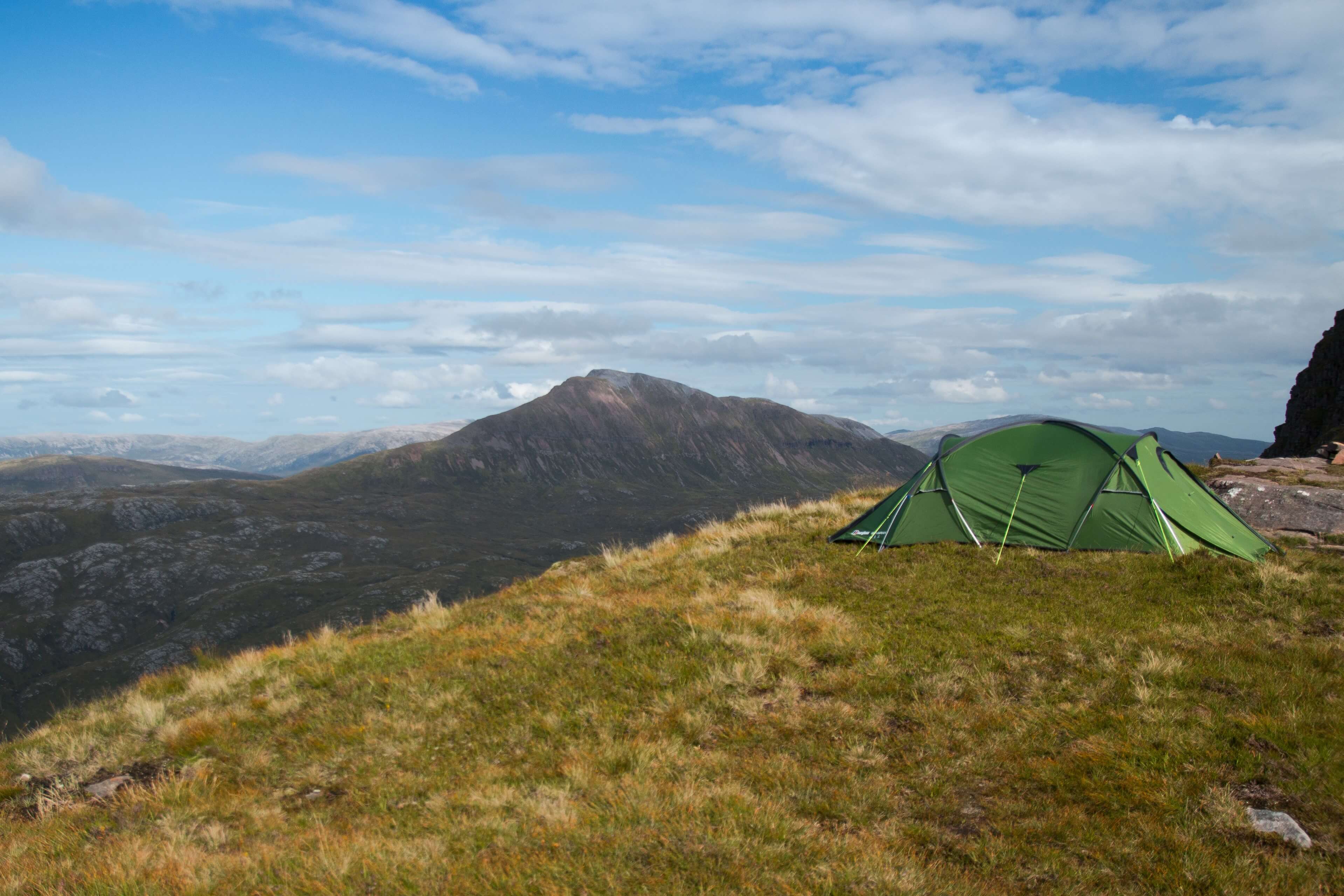 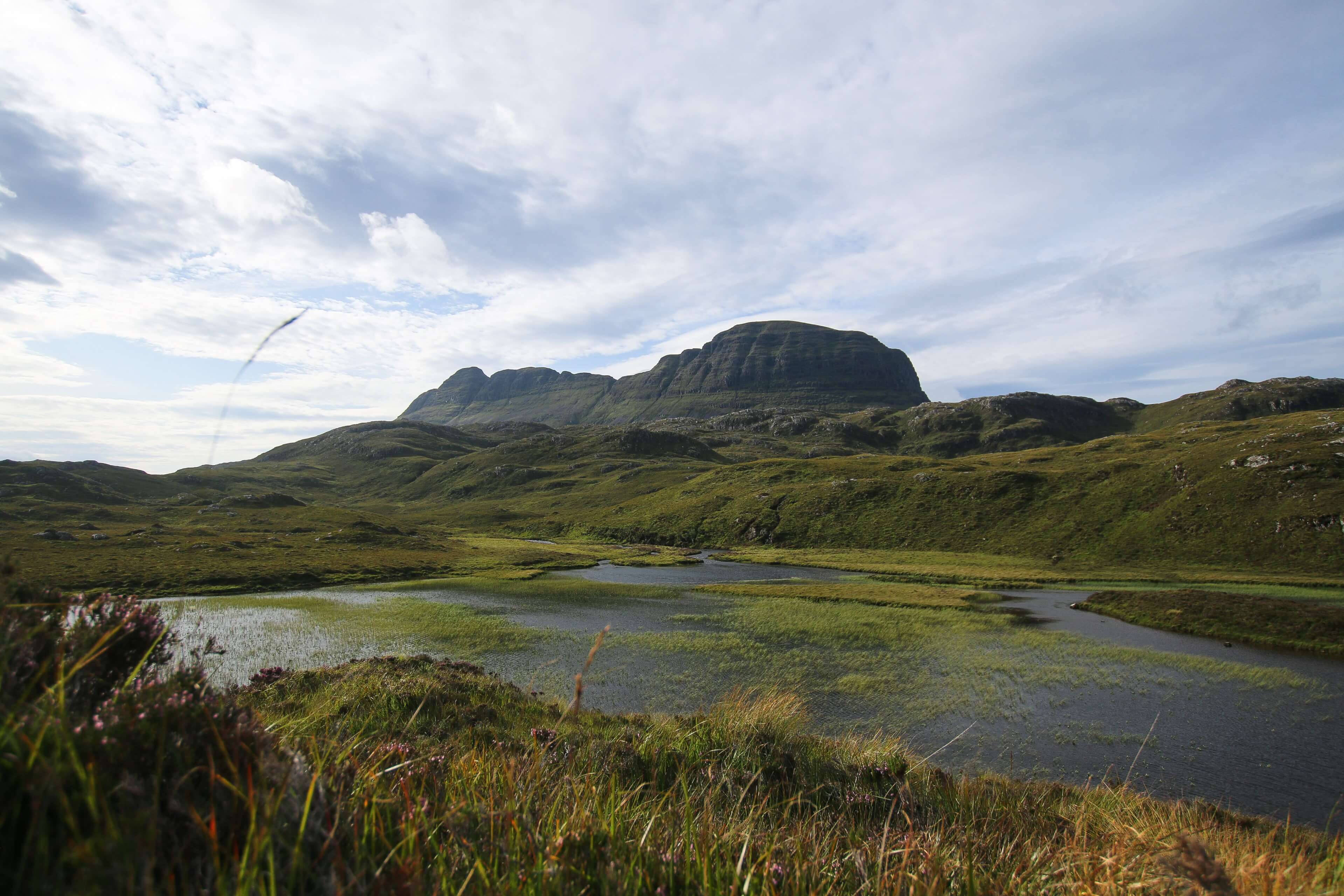 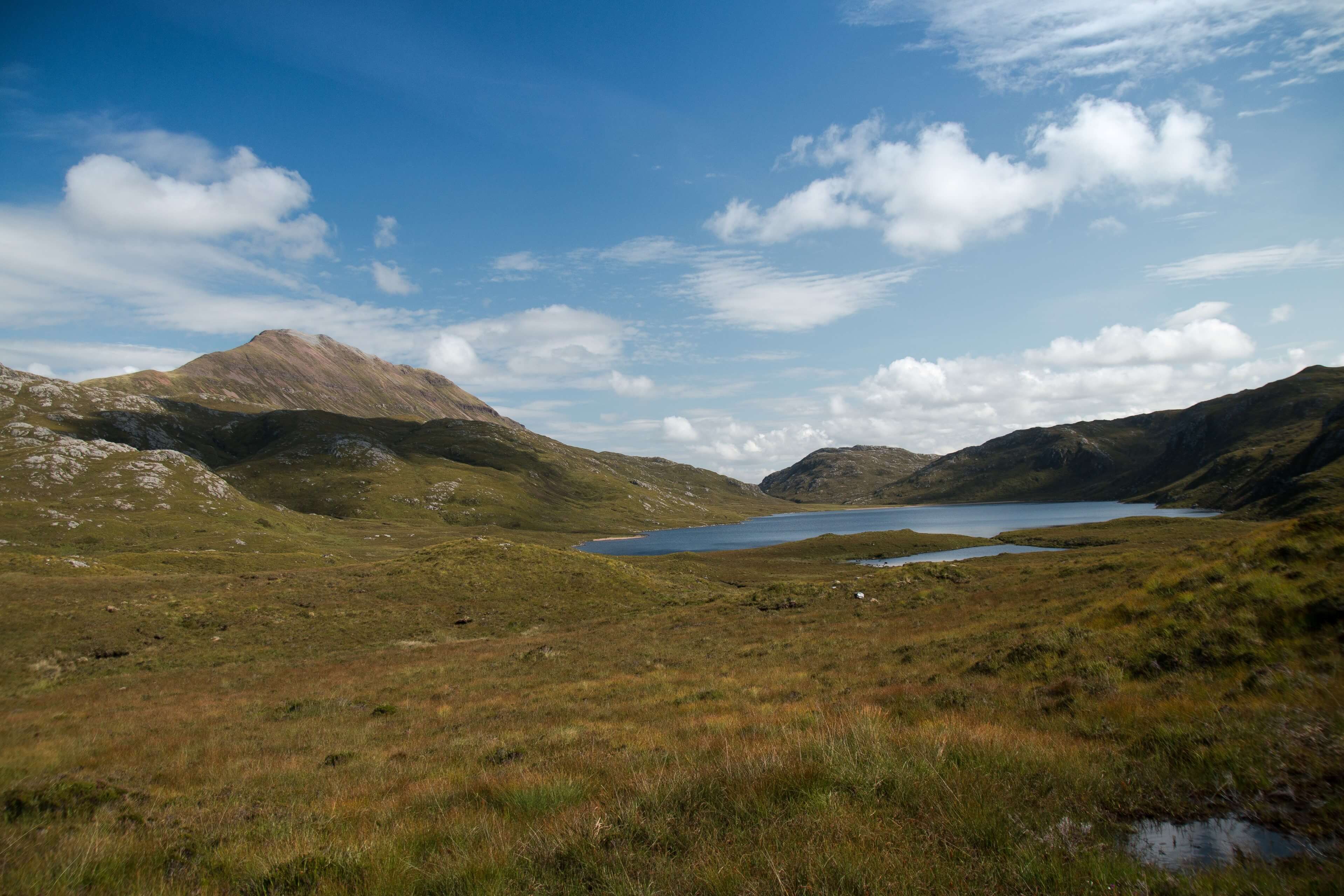 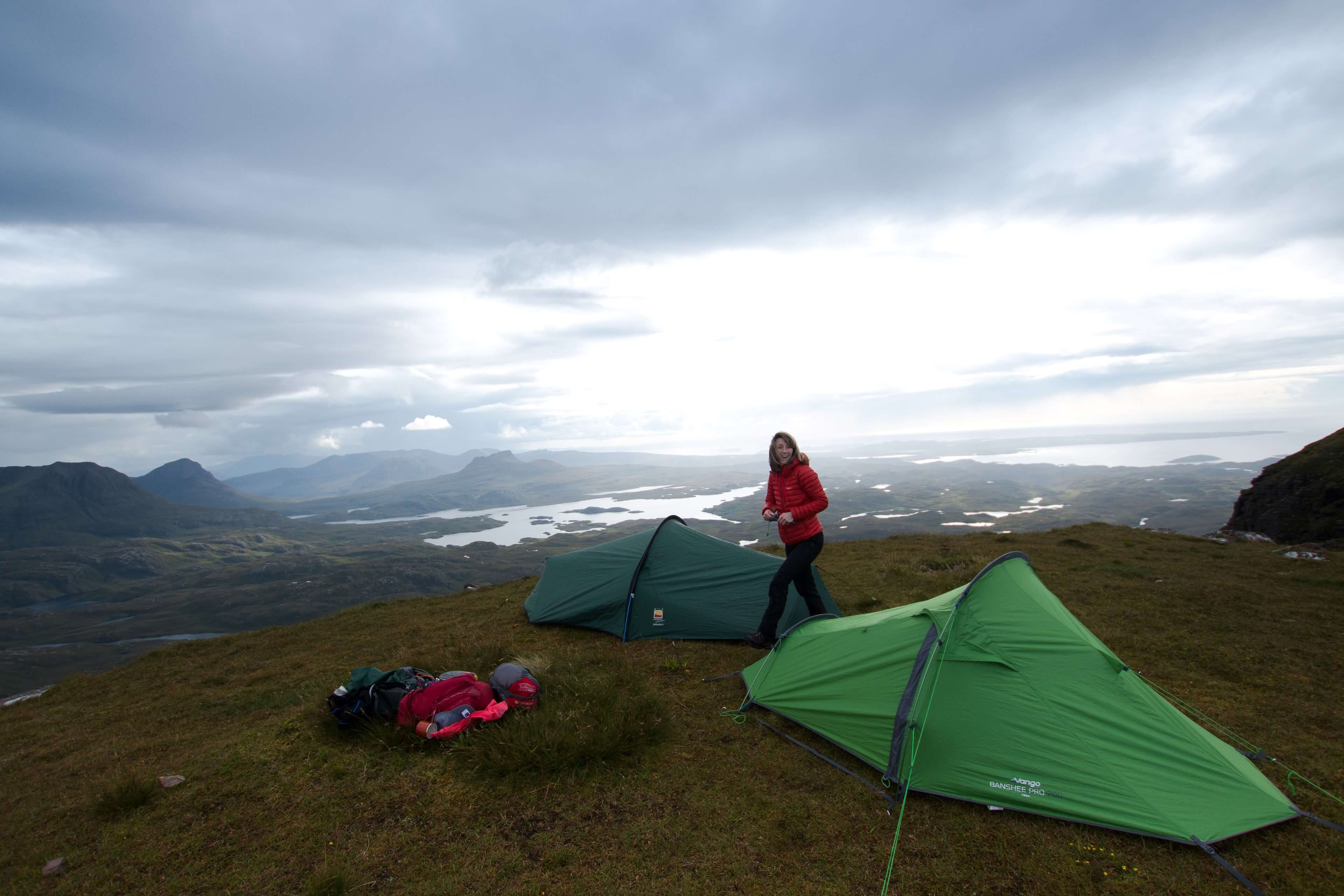 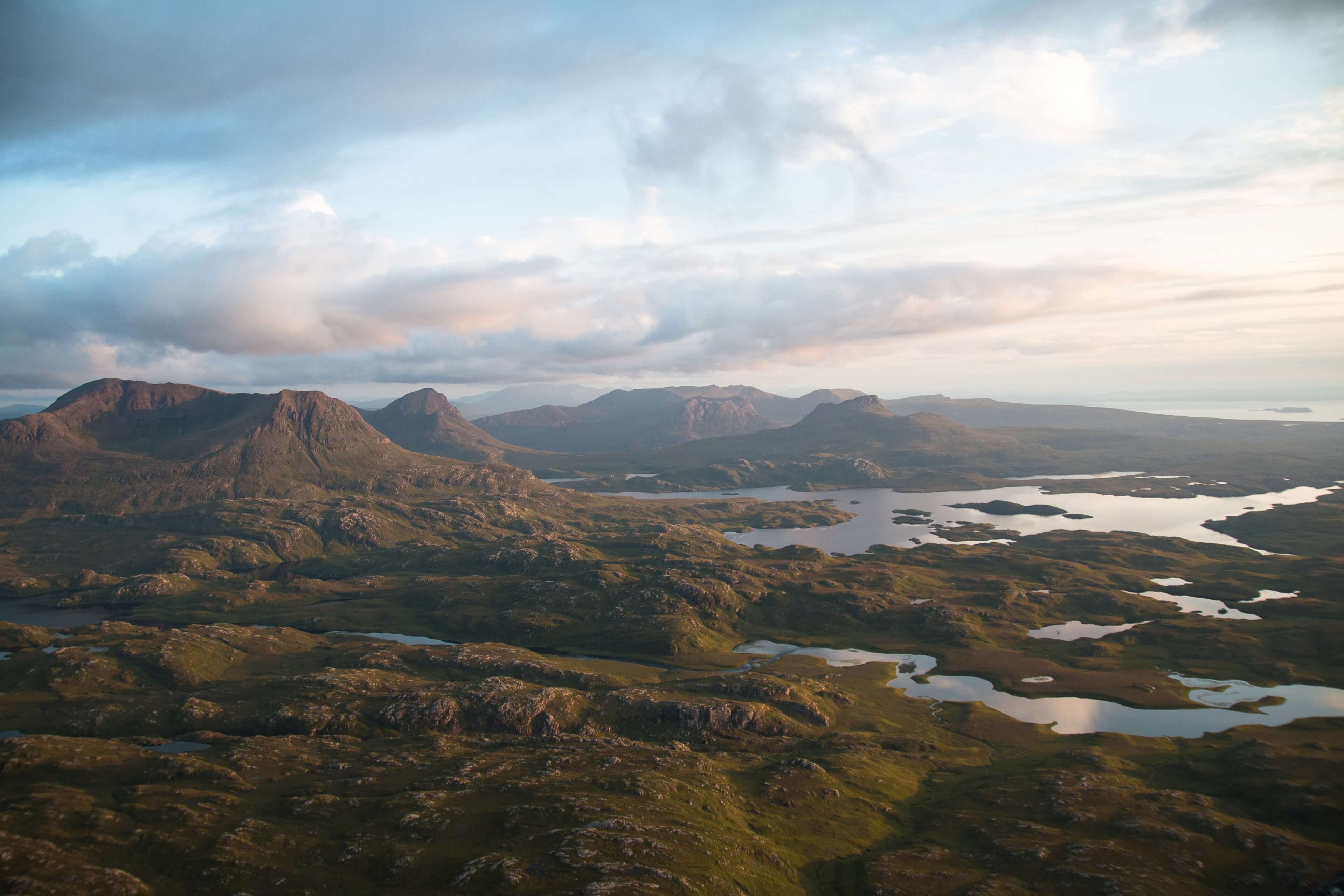 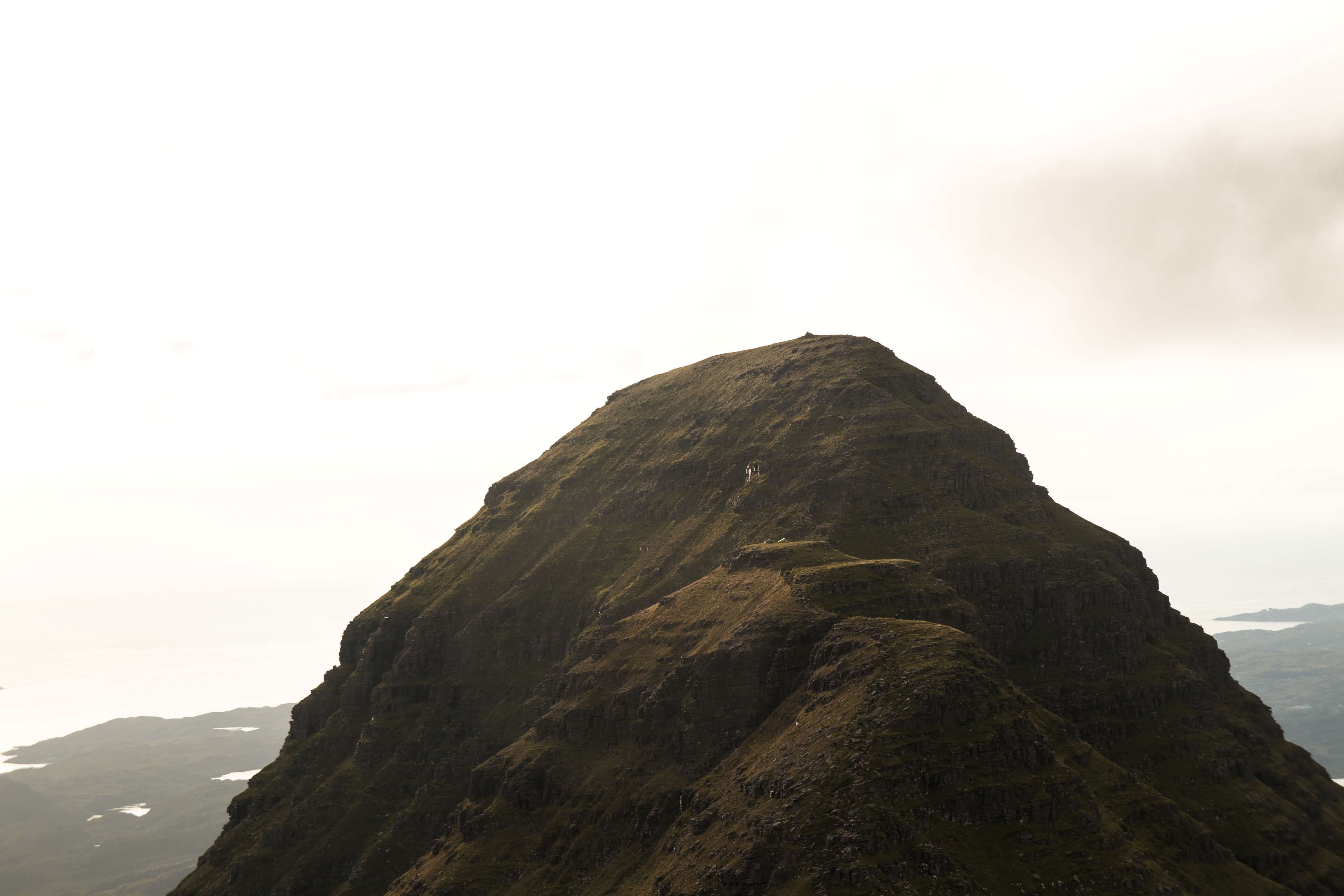 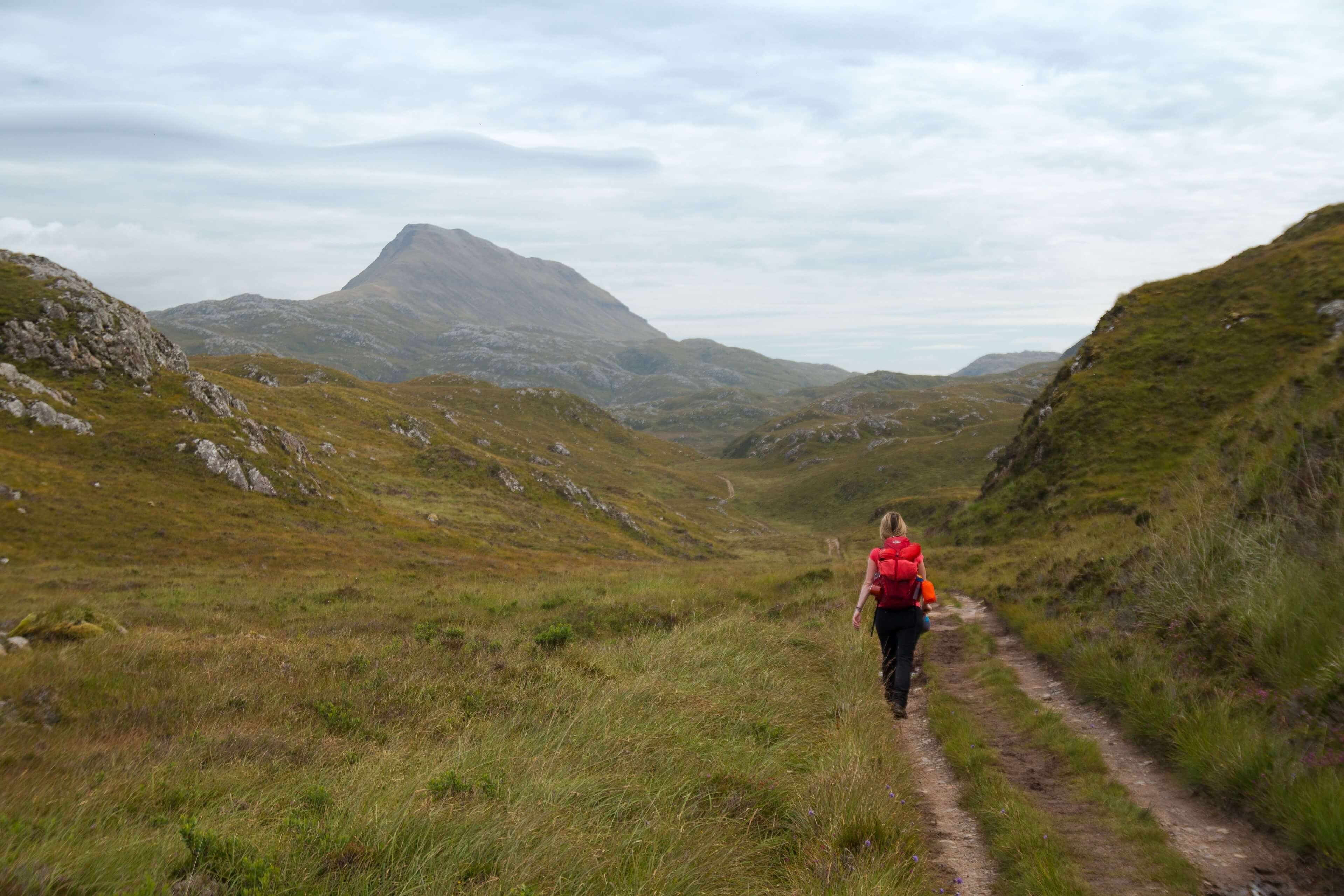 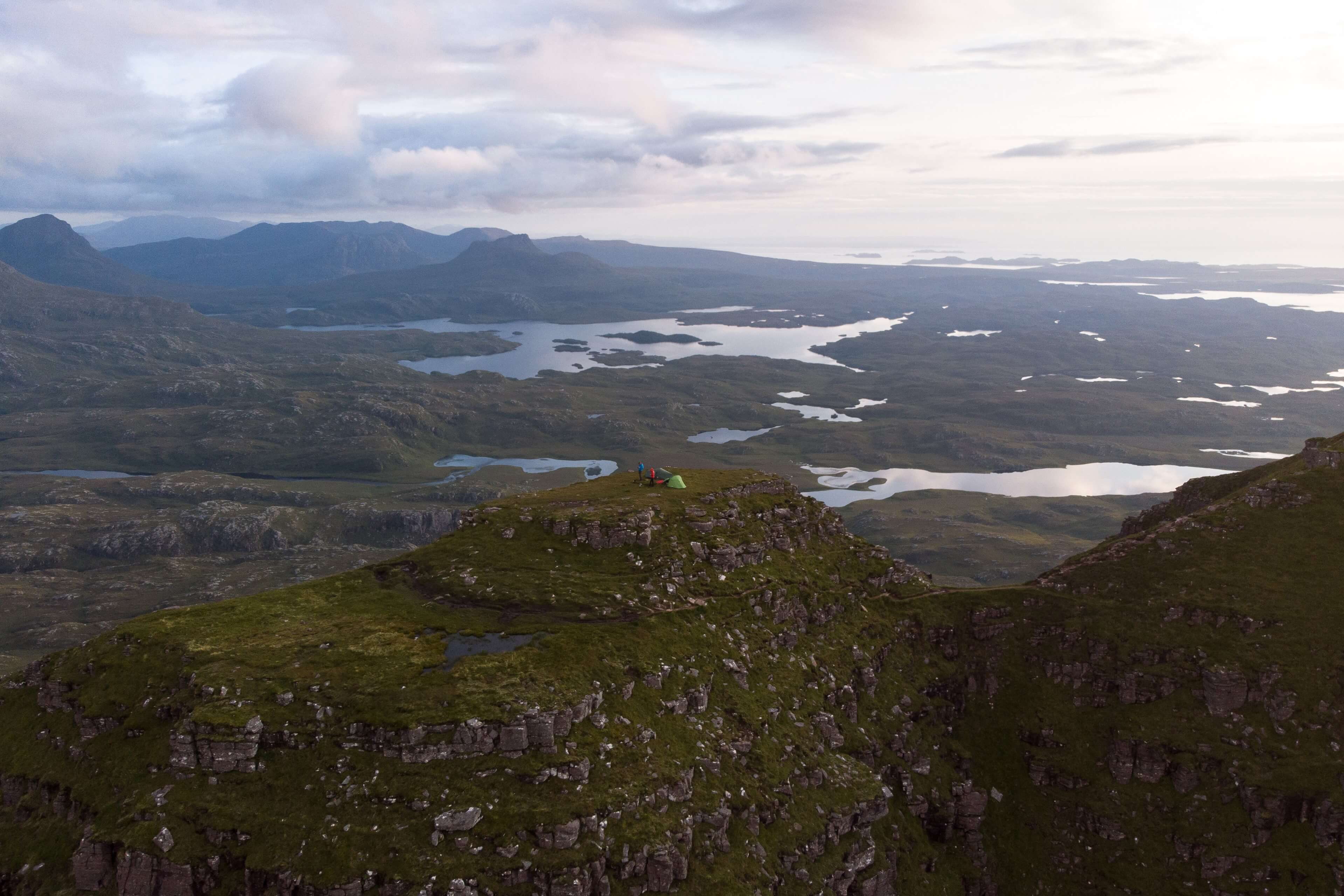 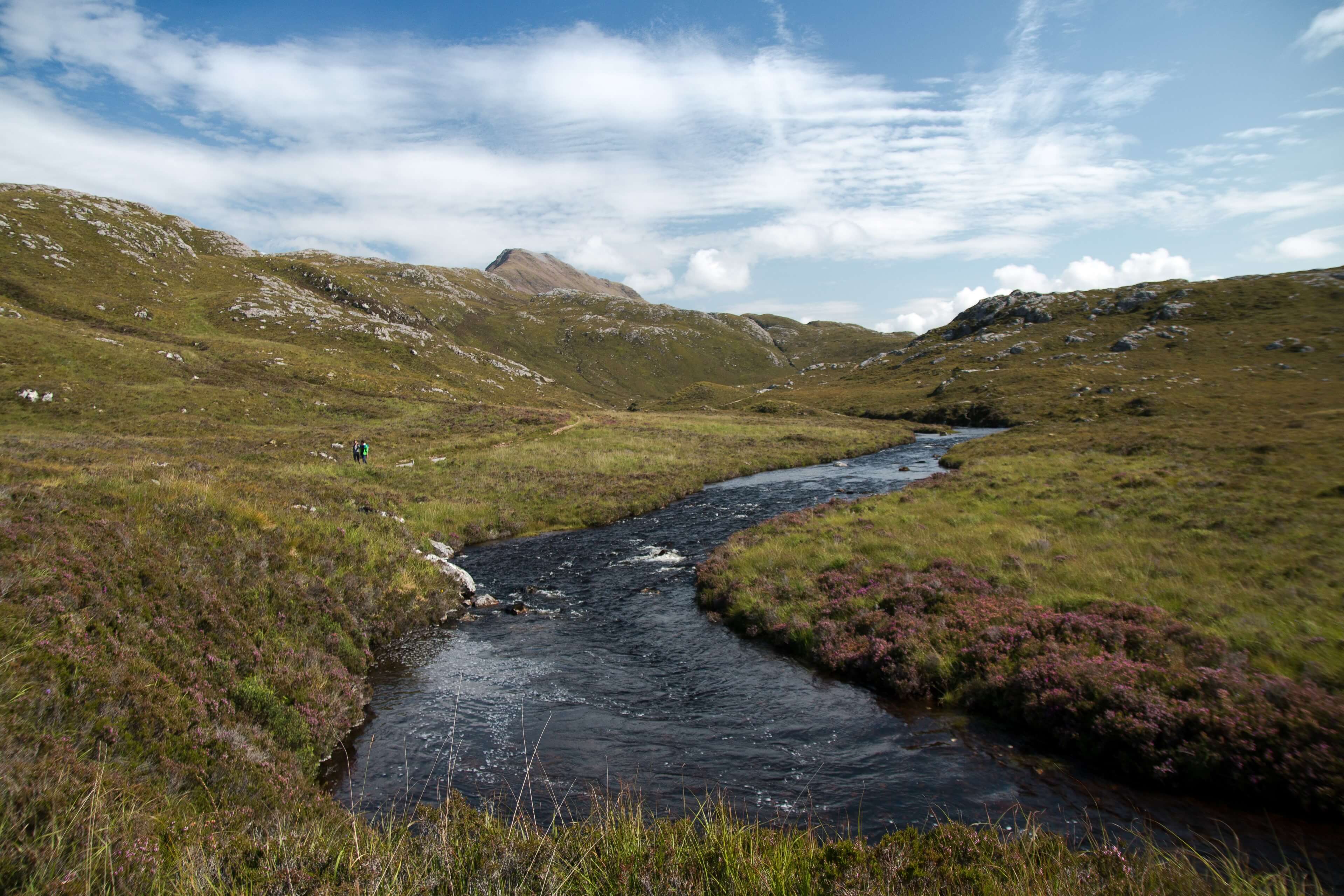 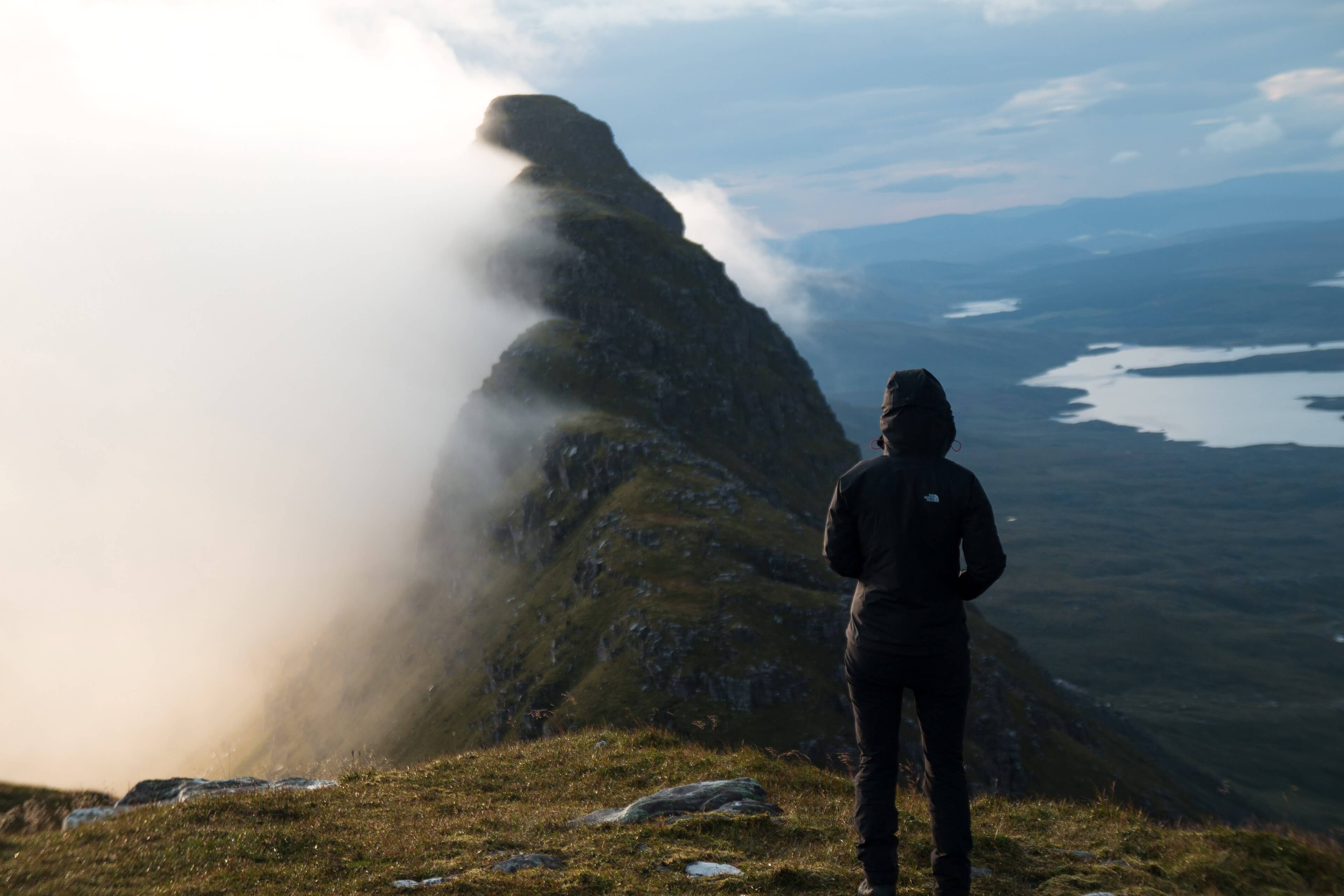 Suilven is one of those mountain peaks that just begs to be climbed! Ever since I first saw a photo of it a few years ago it’s been on the top of my most desired mountains to climb, anywhere in the world. It’s not big (not even a munro at 731m) or hard, I mean it’s just a fairly simple walk but the fact it stands alone amongst some of the finest landscape views that Scotland has to offer, well that's pretty special.

Being located in the North Western highlands of Scotland, Suilven is not in a particularly convenient location to get too when you're based in the South of England. So the last few years I have been patiently waiting for an opportunity to road trip the NC500 around Scotland and hike Suilven on the way through. This summer such a chance came when I was chatting to hiking buddy Chris (aka superwoman) about doing a summer adventure together. The NC500 was officially on! Chris had done the NC500 in 2018 on her road bike so was keen to return and get stuck into some proper mountain hiking.  The main plan was to road trip across the west coast and hike whatever mountain ranges we fancied on the journey.  (Trail features for the best ones are to follow soon on the website) However the main objective for me was always Suilven. We literally left Chris's home in near Liverpool with no exact plan of what we were going to do and when we were going to do it, but we were quite sure that Suilven "had" to be wild camped!

Fast forward a week into our NC500 adventure where we had just hiked the mountain Liathach around Torridon. We could see that in a few days’ time on the Tuesday that the weather was due to be warm, sunny, clear and calm. (at last!) That was the perfect day for Suilven! So we road tripped up to the far north to Durness for a few days and then headed back down to Lochinver along the west coast which is the starting point of the Suilven hiking trail. We had already seen the mountain westwards along the A837 heading north those previous few days back and even from the road at distance this peak looks absolutely fantastic.

The starting point of this hike is located from the village of Lochinver. About a mile down Cansip Road you reach a small parking area/layby. The road continues on but this is for Glencansip lodge only. The layby has a parking donation box which goes towards the maintenance of the trails so please contribute something, especially if parking overnight like we did. We rocked up at the car park around 1pm which gave us plenty of time to get up to the mountain, pitch tent and enjoy the evening. The weather was amazing. Sunny, clear and calm just like the forecast. Was it going to be perfect up on the mountain? we hoped so!

After spending half an hour sorting our gear and camping stuff we were ready to adventure and headed eastwards along the road towards the lodge. Straight away you can see the west face of the mountain. It dominates the landscape with its domed shaped summit. For me this is the best view of Suilven, as you look from West down its ridged side.

The lodge is about half a mile down the road at which point you go through a gate onto the actual trail path and basically into wild countryside with its rugged, rocky landscape. The trail is really simple although undulating for a few miles. It’s a relaxing walk and feels like you are in the heart of Scotland's wilderness. Although Suilven is a prominent and desirable peak, its location, and its non munro status mean it’s not a particularly busy mountain, so it’s a fairly quiet walk. The majority of people we met were older experienced hikers who loved to chat and share their passion of Scottish mountain hiking!

After a few miles you gradually make you way around the northern side of Suilven. The path also has excellent views of Canisp (847m) straight ahead as you pass a few small lakes and rivers. Eventually you come to a crossroad where you can either go straight on or turn southwards which takes you up Suilven. We heard there is apparently a bothy if you continue straight on so a good potential place to stay if needed. The trail will now start ascending until you slowly work your way up to the base of the mountain. Having done all our hiking with day packs so far, it was actually quite hard going in the sun with the added weight of camping gear. A group just descending from the mountain had the right idea by going skinny dipping in a lake behind us!

The really steep climb starts at the base of the mountain. It’s not a long climb, more a steep zig zag slog, but not steep enough for scrambling. There are plenty of stones to grip during the ascent which brings you to a cool protruding pinnacle facing the northern rocky landscape. Chris couldn't resist some obligatory photo poses, for the Gram obviously! Finally you arrive at the ridge of the mountain. And 'wow' what a view you get. There's no finer view than looking across the southern expanse of rocky wetlands towards the cool spikey peak of Stac Pollaidh (612m) in the distance.

The summit of Suliven (731m) is on the western peak and we had a rough camping area we had researched which was in that direction so we headed further up to find a flat spot to pitch. A tent had already been pitched up by a Scottish guy near the ridge which was in a cool place facing across to Canisp but nothing like what we found. Between the entrance ridge and the summit is a cone section with a flat spot which had an amazing view of the pointy spired eastern section of the mountain, Meall Meadhonach. A perfect place to set up camp, and a base for my drone flying for later.

It was around 6pm by the time we pitched tents so a good 4.5 hours walk from the car and approx. 7 miles walked. The weather was still glorious so we chilled for a bit with a coffee and tea before we made our final ascent up to the summit. It’s quite a cool little scramble up to the top, nothing technical, just a bit fun. On the way we bumped into some Belgium guys that we had met a few days earlier in a bunkhouse in Kinlochewe. They also confirmed our camping location looked really really "cool".  At the summit, known as Caisteal Liath, the 360 degree views are incredible. Until you get to the top you don't realise how much water and lakes dominate the landscape. It kind of reminded me of Norway’s impressive  landscape.

After a good walk across the eastern side of the mountain we were getting hungry so whilst Chris rustled up some beans and burgers on the stove, I set up my camera for some time-lapse filming and unveiled the drone (which up to this point was impossible to use due to inconsistent weather) to get some tasty ariel footage. Sunset was now rolling across the landscape providing some amazing light views. I particularly loved the spire of Meall Meadhnach getting progressively longer and longer towards the East. This is shown on the drone/time-lapse short video linked to this trail on the Trail Exposure web site. Once the sun had disappeared behind the west end of the mountain we headed back up to the summit to get a full view of sunset turning into evening whilst playing cards. I may add that I'm not a cards player at all so was suitably chuffed in beating Chris 5-0 at one of her games!

Once the sun had disappeared it turned considerably colder, not a surprise I guess being 731m up a mountain. It was time to head back to camp (scrambling in the dark is not a good idea) and get a good night sleep, or so I hoped. This is a mountain still and the weather can turn very quickly. Overnight the temperatures dropped, the wind picked up considerably and the rain came. Let’s just say it was a poor night’s sleep but a small sacrifice for an amazing day of hiking.

It would have been amazing walking up to a glorious sunset across the valley and mountain (wasted effort positioning my tent door facing east!) but unfortunately you can’t have too much of a good thing. We woke to a cloudy chilly rainy morning, so we decided to pack up quickly, get down the mountain and back to Lochinver for a nice breakfast. As we finished packing, the clouds and rain cleared revealing the mist streaming of the spire of Meall Meadhnach, a rather impressive sight indeed. It actually turned into a nice sunny walk back to the car as we retraced our steps down the mountain and back along the trail path. We passed a few people heading up taking advantage of the weather as it was forecast for rain later in the day. The good thing with Suilven is as it’s not particularly high, you have a high chance of it not being stuck in the clouds like some other larger mountains.

We arrived back at the car, packed our stuff, donated to the parking box and headed back into Lochinver where we found a really nice café, An Cala Café (very good coffee) and enjoyed some breakfast and cake!! One last amusing highlight being a cat deciding to stop right in front of our window and play with dead bird it had just caught. I mean that cat was absolutely loving it!!

So our Suilven adventure was at and end, although more adventures continued south along the NC500. Without doubt that was the best hike of the entire trip. My years’ of waiting did not disappoint. It’s just a stunning place to be and to enjoy our great outdoors. Anyone reading this, you must go and enjoy for yourself. It’s not particularly demanding and is idea for most people. I will most certainly be returning in the future.

If you have any questions please feel free to ask. GPX file also available.